Weeks ago, we all gathered around our television sets and witnessed something that hadn’t happened in nearly forty years: American Pharoah won horse racing’s Triple Crown. 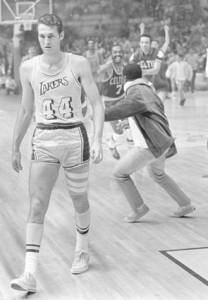 Very soon, we’re about to witness something that’s happened even less frequently than that.

In 1969, the Los Angeles Lakers played the Boston Celtics in the NBA Finals.  The Celtics beat Los Angeles in seven games but Jerry West was the best player on the floor, averaging 38 points per game for the series.  Accordingly he was awarded the NBA Finals MVP.  He remains the only player on a losing team to have won the award.

That’s all about to change because the Golden State Warriors, whose roster Jerry West coincidentally manages, are about to beat the Cleveland Cavaliers who boast the best player in the series: LeBron James.

In the midst of these playoffs, ESPN hired Dwyane Wade, LeBron’s former teammate, to provide some post-game analysis.  After Game Three, he asked LeBron if Steph Curry’s regular season MVP Award served as any extra motivation for the way he has played in these Finals.

James admitted that while he didn’t like coming in third in the voting (behind Curry and Houston’s James Harden), he didn’t need any extra motivation.

These Finals, LeBron James has played like a man possessed, averaging 36 points, 12 rebounds and 8 assists per game.  He is carrying his team.  With the second and third best players for Cavaliers both injured, LeBron has had to be even more LeBron-like.

And he has been. 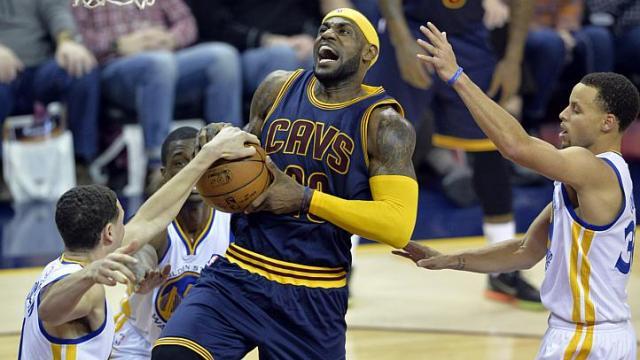 But asking him to beat a team that was historically good this season is too much.  That showed in Game Four.  While role players like Matthew Dellavedova, Tristan Thompson and Timofey Mozgov have stepped up their games, they are no match for the depth and talent of the Golden State Warriors.

The best player on the floor, regardless of who wins this series, is LeBron James.   Win or lose, there is no way the league cannot award him the NBA Finals MVP.  And that will be awkward.

So how will this all go down?

Over the past few decades, we’ve watched teams celebrate and raise the trophy, in front of a home crowd if they’re lucky.  The commissioner congratulates the owner, head coach and players.  They all speak, thank the fans and then the best player of the series is announced, the MVP award handed to him while his teammates acknowledge his greatness.

Win or lose, LeBron is the best player on the floor by far.  They can’t possibly give him the MVP Award in front of another team that’s celebrating, can they?  Are they going to bring LeBron James the award in his locker room?  Again, this is something we haven’t seen in almost fifty years so the league and the network better start planning ahead because it’s about to happen. 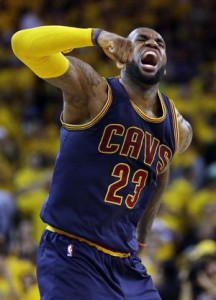 Cleveland can’t beat Golden State two more times despite LeBron’s otherworldly talent.  Far be it from me to call this series over but at this point, it sure seems unlikely.

The Cavs might surprise me and win two out of the next three.  If they don’t, and the Warriors win, and LeBron continues to play the way he has, the award will be his.

And that will just be weird, deserved but weird nonetheless.   You have to admit it’s a pretty shitty consolation prize.  He’ll be gracious in accepting it but he won’t want it.  He’ll want what Golden State has.

LeBron has admitted he didn’t think his Cavs could get this far this quickly.  They’ll have their chances, maybe next year, maybe the year after that.  And LeBron James will win Finals MVP when it happens.

Odds are he’ll enjoy that one considerably more.