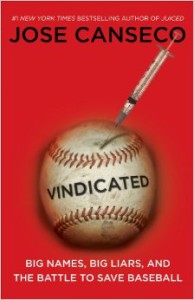 Just when you thought the conversation about steroid use in baseball was over and done with, Alex Rodriguez continues to break Major League records with every at-bat.  This season, he passed Willie Mays for fourth on the all-time home run list and Barry Bonds for fourth on the all-time RBI list, feats that must have old school baseball fans cringing.  At this point, no self-respecting can watch a baseball travel 450 feet without thinking about the bat who cried wolf.  It’s a mess baseball has yet to clean up.

Looking for some closure, I recently picked up a used copy of Jose Canseco’s Vindicated to see what the former bash brother had to say about his time in the big leagues and his time with the needles.  I had never read his previous, Juiced, which for all intents and purposes blew the lid off baseball’s steroid scandal so now seemed to be as good a time as any.

Vindicated, Juiced’s sequel, if you will, begins with a lot of talk about Roger Clemens.  Canseco had intended to express his thoughts on Clemens in Juiced, which was originally published in 2005 (Vindicated was released in 2008).  Canseco was going to imply that Clemens was, well, juiced, however the author was strongly advised to exclude Clemens’ name from his work. 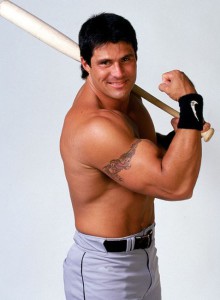 He wondered why.  He wondered why so many athletes got a pass while he continued to be discredited.  While others got away scot-free, Canseco was called the “NotCredible Hulk” and “Monica Lewinsky with a bat.”  After all, he was the Godfather of Steroids.  We didn’t believe Canseco because we didn’t like Canseco.   Meanwhile, he was the only one in baseball telling the truth.

So much of who we believed was guilty had to do with public perception, which players we liked and disliked.  Mark McGwire was the believable one, Canseco the pariah.  Vindicated is Canseco’s exhale, his I told you so, his ultimate middle finger to all those who didn’t believe him.  And it’s a pretty entertaining read because of it.

Rarely do athletes write groundbreaking books but the fact that this, and more appropriately Juiced was compared to Jim Bouton’s Ball Four, should tell us the importance of the work.  Ironically, it came from an athlete we least expected.

Even when he named names in his first book, people called him a liar.  I couldn’t help but think of Ray Liotta as Henry Hill on the witness stand at the end of “Goodfellas.”  Canseco was the rat and clearly portrayed as such.  But he never claimed to be innocent.  He just wanted to set the record straight. Vindicated did just that. 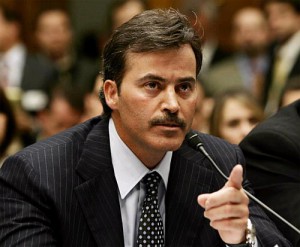 And boy, does he get even.

He blasts McGwire, Palmeiro and Sosa, who all lied before Congress.  See no evil, hear no evil, speak no Spanish.

Canseco calls out the Mitchell Report.  During their entire investigation, he claims they never so much as called him, which he found ironic considering he felt the report essentially stemmed from the book he wrote.

“Overall, I’d have to say I found the reports disappointing, and that’s a gross understatement.  They had spent tens of millions of dollars to tell us something most of us already knew.  How could they ignore such blatant evidence and still call their report comprehensive?”

He delves into why he first took steroids, his overwhelming desire to succeed.  He discusses the dangers of kids taking steroids.  However, he doesn’t think steroids messed up the game, which is not entirely inconsistent with his message or the way he lived his life.

“They made the game more entertaining, and the fans got their money’s worth (and then some). If nothing else, the Steroid Era made it worthwhile for the fans.  The thrill of watching a too big guy with a too big head knocking a 600-foot homer out of the park, who doesn’t enjoy that?  I know I did.  I enjoyed batting those moon shots into the stratosphere.” 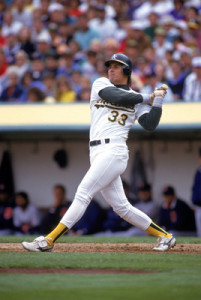 Jose Canseco wanted to be the best baseball player ever. He felt steroids could help him achieve that goal.  He also wanted to entertain the fans.  Steroids, he thought, were a small price to pay.

He also had some choice words for A-Rod but then again, who doesn’t?

The farther away we get from the steroid era, the more fascinating the debate becomes.  How will we deal with these athletes ten, twenty or thirty years down the road?

Vindicated left me questioning the future of the game and Jose Canseco’s place in it.  Can baseball still be exciting and entertaining without steroids?  Are ratings higher now or when baseballs were flying out of the ballpark with the greatest of ease?  Major League Baseball opened up Pandora’s Box and is now having a tough time keeping it shut.

Vindicatedis one key figure’s important account of the steroid era.  It is written by a man with no reason to lie.  Who would know better what was going on during the steroid era than the biggest juicer in the game?  For those reasons, it is an enjoyable, honest and worthwhile read.