Ladies and gentlemen, I once again proudly give to you…. Dr. Milhouse 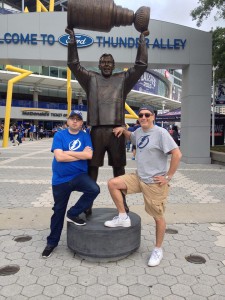 I go to every game I possibly can, I watch every road game I can, and if it’s possible, I’ll go to a bar to watch the team with other people. It’s not so bad early in the year, when I can go to games or watch them out of the corner of my eye on TV, and a loss isn’t a deal breaker, because there are so many left to come back from. But once it comes time for a playoff run? I turn into every awful idea you have about sports fans. I drink too much, I’m overly superstitious, and I will yell atrocious things at total strangers, just because they happen to wear opposing colors. On normal days, I’m a perfectly able, functioning member of society. When a championship is involved, I insist on sitting in the same seat, wearing the same shirt, growing a playoff beard, and any other “tradition” I justify to myself.
It’s not something I’m happy about, or particularly proud of, but it’s fact.
Rodney Marsh, who made his name in Europe as a soccer player for Manchester City, and was the sparkle of Tampa’s eyes in the late 70s, once said, “Most people are in a factory from nine till five.  Their job may be to turn out 263 little circles.  At the end of the week they’re three short and somebody has a go at them.  On Saturday afternoons they deserve something to go and shout about.” It describes my approach to fandom pretty well. All week long, we absorb abuse. Letting it out at a sporting event is a healthy way to release that pent up aggression. If that involves telling Martin St. Louis that his mother is sucking cocks in hell, so be it.
Which brings me to my primary obsession this time of year: The Tampa Bay Lightning. As frequent readers of this site no doubt know by now, I’ve dragged the Chump into my world of hockey psychosis. He’s seen me go from a rational, intelligent person and change into someone yelling “HIT HIM AGAIN!!!!!!!!!!!!!!!” like I’m spearheading a battering ram at a castle gate. Because Hockey.
Is what I do a poor reflection on me as a person? Probably.
Should sports fans have some sort of common decorum, even in the heat of battle? Maybe. 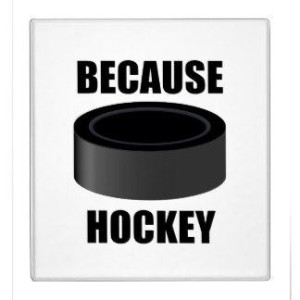 Do I intend to act any differently next spring when the Lightning make another playoff run? Fuck off. No.
So, while I attempt to cope with the Lightning falling short of the Stanley Cup, I lick my wounds and remind myself of crucial thoughts. The team’s core is young, under contract, and even hungrier now than they were before. And, maybe next year, the PLAYOFFS!!!1 shirt will work its magic. Next year’s schedule comes out soon. Season ticket seat relocation is in a week. A couple months to rest, and we’re back at it again. We’ll don the blue, we’ll go to games, watch from home, watch with friends at bars, and lose our minds all over again. The Lightning are 12/1 to win the Cup next year. Place your bets now.
Because hockey.
Please follow and like us:

10 Replies to “Because hockey”