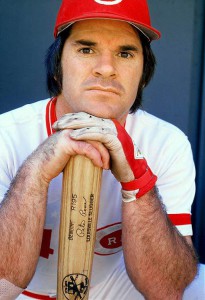 One of the greatest sports arguments of all-time has finally been resolved.

I’m not quite sure how many times I’ve written about Pete Rose in the past but this may be the last time I ever do.

As you all probably know, Pete Rose is the greatest hitter the game of baseball has ever seen, or at least the most prolific.  While the benchmark for greatness has always been 3,000 hits, Pete Rose finished his career with 4,256.  The all-time hit record is his and will be forever.  He later went on to manage the Cincinnati Reds, the team with which he played for 19 seasons.

Despite his numerous on-the-field accomplishments, Rose has been banned from baseball for betting on the game.  After lying about his gambling habit for years, Rose finally came clean in 2004 confessing that, as a manager, he had bet on baseball, including games in which his team played.

Rose apologists, and there were plenty, still felt Rose deserved a place in the Hall of Fame.  He played harder than anyone they had ever seen, they would argue.  What he did as a player should not affect what he did as a manager, they’d proclaim, as if one could separate the two.  It’s a debate that turns even the most logical person illogical.

Now word has emerged that Rose bet on baseball as a player as well.  Crickets from the apologists. 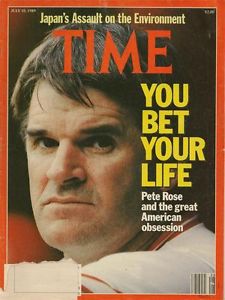 I get that they love Rose.  I never questioned their allegiance, only their objectivity.  Nor am I here to say I told you so.  For years, I’ve taken the stance that Rose broke the cardinal rule of baseball and is justly paying the price.  He’s tried to make amends, banging at the doors of Cooperstown, trying to get in with commissioner after commissioner saying not by the hair on their chinny chin chin.

With Bud Selig’s retirement and a new commissioner in office, this finally seemed like the time Rose might be forgiven, a well-deserved bust being polished in honor for his contributions to the game.

With news surfacing that he bet as a player, that ain’t gonna happen.

I’m not sure whether Commissioner Manfred was privy to this investigation while it was going on but it’s out there now, the final push for Peter all but petered out.  Manfred’s job just got a whole lot easier.

We’re a forgiving bunch, we sports fans.  For example, we were more offended about Alex Rodriguez lying about steroids than we were about him taking them.  Andy Pettitte admitted to taking steroids.  We forgave him.  Rafael Palmeiro lied about it to Congress and is now one of baseball’s forgotten figures despite his 569 career home runs.  A Google search of Palmeiro’s name brings not images of him at the plate swinging a bat but of him in a courtroom, waving his finger, standing firmly behind a lie which would eventually be exposed. 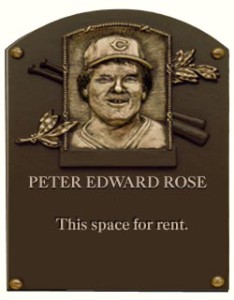 I’m not going to miss debating about Rose even though for years it was one of sports’ most polarizing arguments.  If these reports are true, it’s a debate we can finally put to rest.  We may never know the extent to which Rose bet on baseball.  It’s not like he’s ever told the truth before.  Rose has lied to us so much he makes A-Rod say “Damn, that guy’s a full of shit!”

It’s a sad day for baseball but it shouldn’t be because now we finally have closure.  We know we’ve been lied to.  Repeatedly.  We know this man has a problem and will forever live with that regret.  And now we know he’ll never get into the Hall of Fame.

That will never take away from what he did on the field.  It was never Rose’s effort that came into question, only his character.