Ladies and gents, back by popular demand, the ever-controversial Dr. Milhouse…

Last week, I wrote an article about the joy of shouting for the team I grew up with: The Lightning. Now, I come to speak the unspeakable.

Succeeding long-term in the NHL requires shrewd movement under the salary cap. Next year is the last year of Stamkos’ contract. The Lightning are currently about 3 million below the cap It’ll be about 6 million when they get an exemption, because Mattias Ohlund will never play again (the Bolts have to pay him, but they get an exemption under the cap for his salary).

So, with that six million, you can either re-sign Stamkos to a long-term deal at a huge number–we’ll say 8.5 million a year. He currently makes 7.5, so that brings the cap space down to 5 million. You have to partition that five million out for extended deals for Hedman (who will want a big pay hike when his contract ends), Johnson, Kucherov, Palat, Killorn…all of whom have deals that end in two years. You run out of cap space quickly factoring those contracts in. 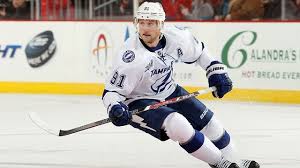 Alternatively, trading Stamkos provides a load of cap room to re-sign the young up & coming starters, and the opportunity to gouge another team for its young stars and a load of draft picks. Imagine getting a top defenseman and a young forward, plus a 1st round draft pick, for essentially giving up Stamkos for 3 months.

Now, of course, there are two downsides to that. The first, obviously, is you lose one of the top five players in the league. But in a league where one player can command over ten percent of the salary cap, you have to decide if you want one amazing player, or five great players.Sure, Chicago has Kane and Toews, but those two are going to eat up over 30% of cap space for two players.

The second, and perhaps more importantly, is the PR problem. The Lightning have cut off the face of their franchise in two of the last three years, letting Vincent Lecavalier leave for nothing and sending Marty St. Louis to New York in the Callahan deal. Can the Lightning and their front office afford to send away their third big star in four years? If the result means the Triplet Line stays together for years to come, is it worth it?