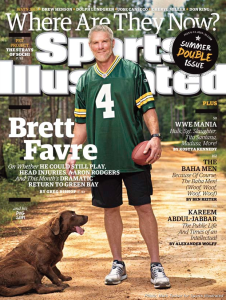 When Sports Illustrated announced it was putting Brett Favre on its latest cover (slow week in the world of sports?), I looked back to find the last time I wrote anything of note about him.

Goodness, has it been that long?  It seems like only yesterday that he was retiring from and then rejoining the league only to do so once again.  There was a time I could barely get the posts out quickly enough before he’d host another press conference.

Two or so years ago, Favre told The Today Show’s Matt Lauer that he, like so many other NFL veterans, suffers from concussion-like symptoms.  While that’s no laughing matter, we kid because we care.  Lines like “No wonder it took him so long to retire again” and “It’s not that he didn’t like Aaron Rodgers. He just didn’t recognize him” and “I played for the Jets and texted WHAT to Jenn Sterger?!?” graced the internet.

Favre was an easy target.

Now we have word that at the age of 45, Favre thinks he can still play.  These comments should come as a surprise to no one.  God bless the Sports Illustrated editor who had enough sense to send a reporter out to Favre’s Mississippi mansion to ask a question to which we all already knew the answer.  Brett Favre is and always will be the gift that keeps on giving.

And as should be expected, Twitter got all excited about the mere hint of another Favre comeback.  His comments, however, turned up surprisingly few good Favre jokes.  Back in the day, a Favre soundbite would send him trending immediately.  How dare SI surprise us with a nugget like this and we be unprepared.  FAVRE HAS THE UPPER HAND!

Haggard and pale, a 97 year old Brett Favre looks up from his hospital bed. He coughs.

Sweet! Brett Favre announces he thinks he can still play at 45 which means another comeback and retirement is impending #justcantgetenough

If Brett Favre actually came back, he’d drop off physically. But cellphone cameras have vastly improved.

Brett Favre says he can still play in the NFL. Assuming he goes back to the @nyjets, I’m apt to agree.

Brett Favre says he could still play in the NFL. The Browns have reportedly offered him a 7-year deal worth $90 million

And on my Facebook profile, SportsChump contributor Rising Storms added: Between him and Herschel Walker, we’re gonna party like its 1993. 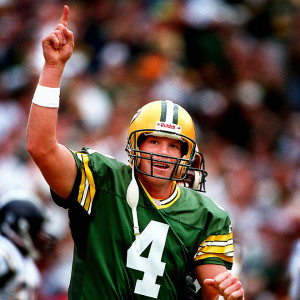 The league is stacked with quality quarterbacks.  I’m not too sure there’s a team Favre could actually start for that wasn’t looking for more than just a publicity stunt #Redskins #Bills #Jetsyetagain.  And to his credit, Favre didn’t necessarily say he could still play in the league, just that he could make the throws if he didn’t have to take the hits.

Either way, one thing we can always count on, whether he’s in or out of the league, whether he’s throwing footballs, riding lawnmowers or sending lewd text messages, Brett Favre will always give us something to talk about.

16 Replies to “It’s been Favre too long”