With Rafa Nadal unexpectedly dropping out of the most prestigious grass tournament of the year and Kei Nishikori leaving the title race due to an injury the tennis fans are wondering: who’s next? We took a shot and tied to predict the way Wimbledon is going to play out.

World’s No 1 Novak Djokovic should feel pretty comfortable with his upcoming bracket – none of his potential opponents, at least until the quarter-final are living up to their expectations. Today he plays the 27th seed Bernard Tomic, who had a pretty bumpy ride to the third round. It took the Aussie five sets to beat the 98th ranked Jan-Lennard Struff in the first round and two tiebreaks against ATP’s 151st Pierre-Hugues Herbert in the second.

Meanwhile Djokovic himself feels really comfortable in the record-breaking Wimbledon heat outplaying both of his previous opponents in three-set matches. In fact, the highway to the semi-final looks pretty clear for the defending champion. Yes, there are eight players in the top half who yet have a set to lose, but of the whole list only Stan Wawrinka seems like a potential threat for Djokovic.

It comes as no surprise that the bookies see the Swiss as Novak’s most likely opponent in the semis. The US Open champ Marin Cilic took a huge blow for his reputation from the World’s No 90 Ricardas Berankis of Lithuania in the second round, while the 7th seeded Milos Raonic has yet to face what seems to be a pretty tough challenge in the third round against Nick Kyrgios. The UK-licensed bookie TonyBet gives Raonic just 1.45 odds at advancing to the next round. 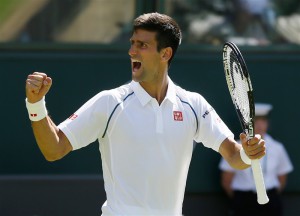 Meanwhile, the bottom half looks a little bit more complicated. The 2013 champion and the local favorite Andy Murray is seen as the main candidate to face Djokovic in the final, however, he still has a long way to go. While his third round opponent Andreas Seppi might not seem as a big threat for the World’s No 3, Jo-Wilfried Tsonga just might be.

Yes, Murray won the last four encounters on grass against the Frenchman, but it wasn’t so long ago, in the 2014 Canadian Masters, when Tsonga went against the odds and eliminated Murray in the quarter-finals. According to the bookies, this one should be one of the most interesting fourth round matches.

On the other end, Roger Federer is looking confident on his way to the 18th Grand Slam title. The 33-year old phenomenon reveled he’s feeling better than ever coming into Wimbledon which he already won six times before, including the record of five in a row titles between 2003 and 2007.

His most likely quarter-final opponent is 6th seeded Tomas Berdych, although his first-round four-set encounter with ATP’s 38th Jeremy Chardy made Czech’s fans worry as three out of his four sets included pretty long tiebreaks, one of which he lost.

Although out-of-shape Nadal’s elimination in the second round came as a surprise, some of the upcoming encounters might see more of the top seeded players leave earlier than expected. Still, according to TonyBet predictions, the semis should see all four of the World’s best fight for the place in the final.

13 Replies to “Halfway Through Wimbledon: Predicting the Future”