“A knot of elbows and shanks, wings and pads, moved on their own. His cap tilted slightly to the right. Three pairs of socks bulked up gams as wispy as exclamation points. Warm-ups meant taking out a stick of Wrigley’s gum, folding back the wrapper, and sticking it on home plate, then tossing one ball after another over the thin foil until fans and opposing players saw just how pinpoint-fine his control was.  When Satchel got to the ball park, it was like the sun just came out.”

If I were to ask you to name the greatest pitchers of all-time, you’d probably throw me back a list that included Christy Mathewson, Cy Young and Walter Johnson.  You might even get a little more modern with names like Bob Gibson, Nolan Ryan and Sandy Koufax.  And if you were really daring, you might get even get more modern than that with names like Roger Clemens, Greg Maddux and Randy Johnson. 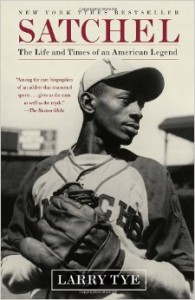 One name that you’d likely omit is Satchel Paige, which is a shame because he ranks among the greatest to ever step on the mound.  We just don’t have the statistics to prove it.

One of my favorite stories about Paige was how he would intentionally walk the bases loaded and then instruct his outfield to go sit down while he retired the side… which he did.  Many of these stories were never documented, only tales of legend… until Larry Tye gave us Satchel: The Life and Times of an American Legend.

The reason, Tye explains, that we don’t immediately think of Satchel when asked about the greatest hurlers of all time is that “in a game where box scores and play-by-play accounts encourage such comparisons, the hard data on Satchel was elusive.”  Tye wrote the book to answer those questions, to provide that data, to find out what was true and what wasn’t about a man, a legend we barely knew, only knew about.

The conflicting stories about Paige begin with his date of birth and even how he got his nickname.   “Each version, no matter how fanciful, adds to our understanding of Leroy and Satchel.”

A hustling and destitute child, a young Paige was caught shoplifting and sent away until the age of 18 to a facility that was “as much an orphanage as a prison.”  It was this experience Paige said attributed to his growth as both a man and a pitcher.  Once released, he worked his way through the baseball circuit, turning heads along the way although in the Jim Crow era, that didn’t stop him from hearing things like “we sure could use you, if only you were white.”  One team owner offered $500 to paint him white and pitch for them, an offer Paige seriously considered. 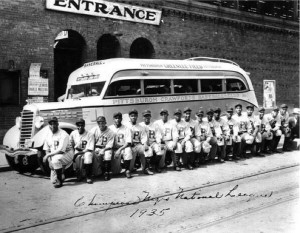 Travel for Negro Leaguers wasn’t easy in the mid-1920s.  “Getting from city to city meant eight full-size men piling into a rusting Buick, balls and bats in a box strapped on the back, clothes stuffed into racks on the side, hoping the car had enough life for one more trip.  On a good night, their bed was a train station floor or a farmer’s field.”  Fast forward to 2015 when players pitch a fit if room service doesn’t arrive on time or as requested.

As Paige’s legend grew, the money started rolling in.  The Black Barons paid him $1,422 in 1929.  In 1932, he became part of the Pittsburgh Crawfords, whose roster boasts five players in the Hall of Fame including Paige and catcher Josh Gibson.  Those two arguably comprised the greatest battery in baseball history.  They quickly became best friends despite their contrasting personalities.

Satchel was the ultimate barnstormer.  “It suited his disposition. He was eager to follow the sun and money wherever they took him.  No need to be pinned down by owners or lovers.  Promoters knew he could fill the stands as well as mow down batters.”  His barnstorming days with Dizzy Dean drew fans in hordes.  Dean said he was the best pitcher he had ever seen.  Joe DiMaggio said he was the best pitcher he ever faced. 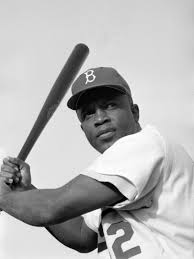 Ultimately the pressure to integrate baseball became too much, however, Jackie Robinson, not Satchel Paige, was the man chosen to make that leap.  Either way, baseball helped pave the way for a nation and its progress.  “Rickey’s hiring of Robinson came nine years before the Supreme Court acknowledged that racially separate schools were unlikely to be equal.  Each white fan who saw a black ballplayer for the first time made it easier for America to envision integrating its classrooms and boardrooms.”  Tye is also careful to point out that money was just as much if not more of a reason for integrating than any sort of social justice.

Paige was torn when Branch Rickey chose Robinson to break baseball’s color barrier.  “He understood that he was aging and old-school, while the twenty-six year-old Robinson was a college boy and army veteran who Rickey felt could bear the ruthless scrutiny of being first.  Satchel realized he was a specter from the past rather than the harbinger the Dodgers wanted of a more racially tolerant future. Still, it hurt.  If Jackie Robinson was the father of equal opportunity in baseball, surely Satchel Paige was the grandfather.”

Aside from his clearly important social role, Paige was one of the first players who had both the talent and the wherewithal to determine his own market value, a near half century before free agency.  “He freed himself of the shackles of owners’ whims, played for the teams that bid the most for his talents, and rattled the foundation of player-management relationship half a century before those changes came to the big leagues.”  Satchel understood his own value and was never afraid to leverage it. 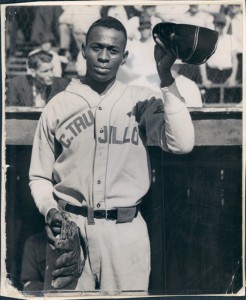 Satchel ultimately made the major leagues in 1948 at the age of 42.  His first start in Cleveland drew over 73,000 fans.  The season he pitched for the St. Louis Browns, their attendance doubled.  Aside from being perhaps the best pitcher ever, even an aging Satchel was the ultimate draw.  Can you imagine the contract a player of Paige’s prowess and persona would garner these days?

I obviously never got to the opportunity to see Satchel Paige pitch.  Odds are neither did you.  Tye’s manuscript makes us wish we had.  His work reminds us that Paige is an integral part of our nation’s sports history and should be celebrated as such.