“Success is how high you bounce when you hit bottom” 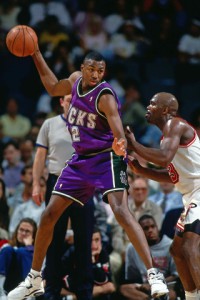 I read an article the other day that made me stop and think.  It made me think about life, addiction, consequences and how the things we don’t control can end up controlling us if we’re not careful.

Vin Baker wasn’t the greatest basketball player ever but he certainly wasn’t bad by any stretch.  He had enough talent to be selected eighth overall out of Hartford, a school not known for churning out NBA prospects.

At 6’11, 230, Baker was the ideal post-man for a team that needed a solid four-five.  The Milwaukee Bucks were that team.

Baker produced almost immediately.  His second, third and fourth years in the league, Baker was a solid 20 points and 10 rebounds a night guy.  Milwaukee had a big man to build around… except they still sucked.  C’mon, it’s Milwaukee.  They haven’t been relevant in decades.

Baker was later traded to Seattle where he played another five years, putting up respectable numbers.  Soon after that, he became an NBA journeyman, playing in Boston, New York, Houston and L.A.  His numbers diminished substantially as he struggled not only with weight and injuries but with alcoholism.

How the mighty have fallen.

Don’t get me wrong.  I work in the service industry myself.  Far be it from me to demean anyone who busts their ass serving drinks for a living.  You just don’t expect to see a man who made $100,000,000 over his career serving you a latte. 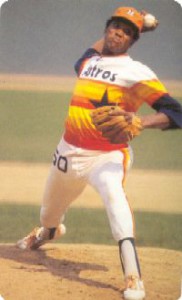 I remember a similar story from back in the day.  JR Richard used to pitch for the Houston Astros in the 1970s.  He was damn good too, a 20-game winner in 1976.  In 1980, Richard suffered a stroke and was never the same.  He ended up divorced and homeless.  At one point in his life, he was living under a Houston overpass.  This was a guy who once pitched in the All-Star Game.

I’m not sure things ever got that bad for Vin Baker but alcohol got the best of him, ruining his career and almost his life.

Both Baker and Richard have found salvation in religion.  Both have become ministers.  Both men have experienced immeasurable personal anguish and come out on top, putting their lives in order and earning respective chances at redemption.

These aren’t just faces on the front of a baseball card.  As fans, we can learn things from the sporting events we watch and the athletes who play them.  Far too often, we take life for granted, not stopping to smell the roses.  The apron-wearing Baker, now four years sober, realizes that.

Not long ago I wrote a post about getting older, about how all my movements and actions are deliberate.  I don’t mean to get all Kumbaya on you but not a day goes by that I don’t consider myself grateful and thankful for my health, family, friends and life.

It took Vin Baker 43 years to realize that.  I guess it’s better late than never.