I’ve set down bad books before.  I couldn’t get through them so I just chalked up the final, unturned pages to writing better left unread.  I’m quick to hit the channel changer if a movie I’m watching can’t hold my interest.  I’ve even sent back bad bottles of wine.

What I witnessed on Sunday might be the most egregious of them all.

I was one of over 60,000 Buccaneers fans who had planned for months on attending the home opener.  It was to be an historic moment for the league, the first time quarterbacks selected numbers one and two had faced each other on opening day.  It turned out to be an historic day for different reasons as well. 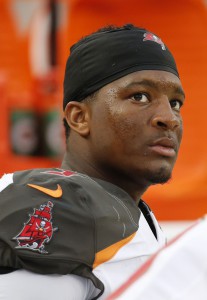 In late April, Tampa Bay selected Jameis Winston with the first pick of the NFL Draft, confident they had their man.  Tennessee was happy with their selection, Marcus Mariota.  Both young men would lead their respective franchises for years to come.

On Sunday, it looked like only one of them would.

Character aside, there were questions about Winston’s decision-making ability on the field.  He completed passes, otherwise known as interceptions, to the opposing team far too often.  After a stellar freshman campaign in which he won a national championship, Winston threw 18 picks his season two at FSU.  He continued that trend on Sunday, completing his very first pass to a man in a Titans uniform.

It was run back for a touchdown.

By the end of the first half, Mariota had thrown four touchdown completions; Winston had thrown two interceptions.  With a little help from the Buccaneers defense, Marcus Mariota became the first quarterback ever to finish his very first game with a perfect quarterback rating.  Raymond James was quiet, except for the booing.

Of course, the loss cannot be blamed entirely on Winston.  The entire team played like shit.

This was an organization that launched an off-season campaign to attract more of a female demographic.  They should probably apologize or at least ask them for coaching advice.

This is a team that was supposed to be game day ready.  On opening Sunday, they allowed more points than any other team in the league.

This was a team that was supposed to make progressions.  If anything, they’ve regressed.

This was a quarterback that was supposed to inspire his teammates to play for him.  His performance was anything but inspirational. 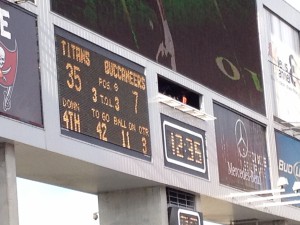 It was bad, all bad.  There was nothing about Sunday’s game that would encourage the sell-out crowd of 64,000 to come back for more, unless of course they were gluttons for punishment.

Buccaneers fans wouldn’t be so bitter if Sunday’s performance was in any way different from anything we’ve already seen.  At one point, down 35-7, the Buccaneers faced a fourth down and 42 and that was only because they had gained yardage on the previous play!

It may be the most embarrassing performance I’ve ever seen.

Years ago, before the Buccaneers had their run at sustained success, which is unfortunately a far too distant memory, I went to a game in the Old Sombrero.  That nearly unwatchable fiasco ended 9-6 with neither team able to score a touchdown.  In the final seconds, the Buccaneers lined up for a 50+-yard field goal to tie things up and send the game into overtime.  The kick fell short.  The crowd left disillusioned, frustrated they just saw a team unable to score… but at least they were in the game.  At least they had a chance to win.  At least that team tried.

Sunday’s game was a disheartening defeat to a Titans team that only won two games last year.  NFL teams who are that close to each other in talent, or lack thereof, are not supposed to beat the other by thirty points.  Heck, the Buccaneers were FAVORED in that game. 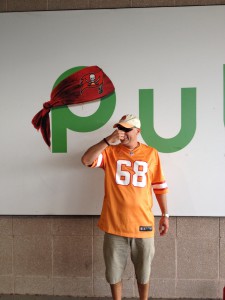 We get that Rome wasn’t built in a day but Rome has been under construction for quite some time.  These Romans haven’t won at home in ten straight games.  What we wanted to see what effort, progress, anything at all positive.  We didn’t get that.  Not from Jameis, not from the coaches, not from anyone.  The twenty-five minute wait in line for concessions was more entertaining.

I’m not writing anything you haven’t already read or felt or shouted at the top of your lungs if you’re a Bucs fan.  It’s going to be another long season, and then some, for Tampa Bay.  Until they shore up some of their key issues, of which there are plenty, this team might just be unwatchable… unless of course watching shitty football is your thing.

If that’s the case, they’ll be happy to have you.  There should be plenty of tickets available.