I moved to Tampa about six-and-a-half years ago with two specific goals in mind: start a successful, sports-related website and get back into the service industry.

I guess one out of two ain’t bad.

I was coming out of a miserable relationship, had just turned forty years old and the job I was in, and hated, had just let me go.  So basically, at 40, I was homeless, loveless and jobless.  I needed to find direction.  With the help of some very special people in my life, and you know who you are, I was able to land squarely on my feet.

It took a while to find the right gig though. 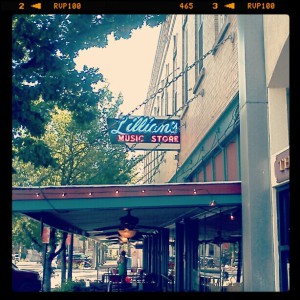 All I knew is that I wanted to tend bar again.  Thousands of you have heard this story before but for those of you who haven’t, here it goes again.

I worked at a bar, a very special place called Lillian’s Music Store, to put myself through college and graduate school.  It was the most fun I ever had in my life.  I made good money and was able to pay for my entire education slinging drinks.  After graduating, I moved on to desk jobs for twelve years, jobs at which I excelled, but they just weren’t me.  The desk job I found most rewarding was the one that had bar stools on the other side of it.

So at forty, I took a long hard look at myself and decided it was time to do what I enjoyed most.

The tricky part was not everybody was looking to hire a forty-year old man who hadn’t worked behind a bar in twelve years but simply wanted to.

Another very special place called Mangroves, which no longer exists, gave me that opportunity.  It was there, a two-story building on South Howard Avenue, where I reconstructed not only my new self but countless lasting and meaningful relationships.

Eighteen months ago, with the help of another special friend, a little Irish Pub in Ybor City was looking for a full-time bartender.  I was hired and the rest is history.  There I tend bar to this day, another new beginning and a very caring and supportive family.

I’ve been in the newspaper before for bartending.  This time around was a bit different. 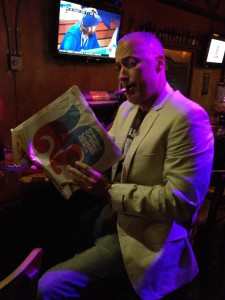 Creative Loafing, Tampa Bay’s guide to all things artistic, celebrated the 25th anniversary of their Best of the Bay in which they nominate things from best politician to best dive bar.  One of their categories was best mixologist, a fancy word for someone who pours your drinks.

With your help, I won that contest.  I’m not sure how many votes I ended up tallying but it must have been a lot because I won outright.

And it was amazing.  Whoever said if you love what you do for a living, you’ll never work another day in your life was spot fucking on.  When I was at that cross roads, one thing I promised myself was that I would never again dread driving to work.

To the original Lillian’s crew who taught me that tending bar was an earnest profession for which I never had to apologize.  It was a hard working job in which, yes, you could still affect people’s lives in a positive way.  Thanks to Michael, Joey, Todd, Gerald, Cindy, Pam, Laura, Rena and the best bartender I ever worked for or with, the man who basically taught me everything I know about the craft, Tom Blake.

To the Mangroves crew who will never suffer a Vitamin C deficiency for all the damn Grand Marnier we drank and who at first skeptically welcomed but later embraced a forty-year old bartender whose last drink was poured long before there was Red Bull, Fireball or a million different flavored vodkas.  The place now stands under different name and ownership but its memories live on forever.  Nothing but love to Rocky, Tina, Jason, Sean Mac, Paul, Dave, Tally, Brandon, Travis, Joey, Monica, Fibbs, Johnny D, Ben, Nathan, Stan and I know I’m forgetting a few folks.  To all the customers who became dear friends too numerous to mention.  And a very special thank you to Sam, Larry and Debbie who took a chance and were eventually happy they did. 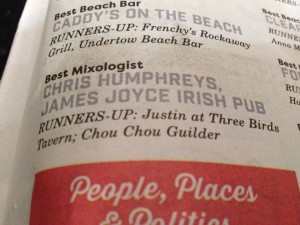 Thanks to the James Joyce Irish Pub, my newest family, and Jackie for landing me the gig in the first place.  Many thanks to Brett, Will, Nick, Pam, Kelly, Daniel, Devin, Todd and Trey, the best fucking chef on the planet who has fed me the last six years of my life.  A million thanks to Ryan and Janice for their unwavering support.  They once asked “What makes you such a good bartender.”  Now they know.

And of course, thanks to Dean.

This day, I am beside myself with joy for I have proven to myself that happiness can be found if you just look hard enough.  There is much more to come as the celebration is just beginning.  To everyone I’ve ever served a drink, had a conversation over the bar with about sports, booze, women and life in general, I thank you.  In addition to paying my light bill, you have proven to me how rewarding life can be.

To all again, I extend a sincere and incredibly heartfelt thank you.

16 Replies to “Reason to celebrate”