Ah yes, the frustration of the Sunday afternoon for those of us who root for NFL teams that are, shall we say, lacking.  I’m becoming convinced the reason so many of us play fantasy football is because the real-life teams we root for suck.

This Sunday, I opted to remain on my couch rather than attend a Carolina Panthers-Tampa Bay Buccaneers game that featured crappy weather and even crappier play.  Good call on my part.

During what turned out to be a deflating loss, I looked to Twitter to keep me company.  Being cyberspatially reminded every few seconds that the Buccaneers aren’t the only futile team in the league, #Dolphins, #Texans, #Bears, #Eagles, #Bills, #Browns, #AnyoneElseIveForgotten, helped ease my pain.  Commiserating on social media can be comforting, like a hug from a long lost friend or a visit to your local AA chapter. 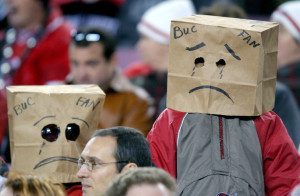 I keep telling myself that this Buccaneers team is a work in progress, that their situation is more promising than the aforementioned hash-tagged teams.  Unfortunately, promise in the NFL only gets you early draft picks the following year.

So, my dear friends, if your football team sucks, I suggest you trade in the paper bag you’re wearing for a Twitter account.  It might just turn your football frowns upside down.

Here are some of the more soul-cleansing Tweets from a Sunday that saw bad teams get only worse.

Jameis Winston has already entered the I-need-a-hug portion of his rookie season.

With Bucs trailing 31-10, the sun has come out strongly at RayJay amid the darkness. Stadium bars doing a brisk business

Are they gonna charge a cover for Lovie Smith’s post-game press conference?  And should I wear black?

Full disclosure: This is from a long disgruntled Redskins fan. My train wreck squad can proudly take credit for preventing Miami’s 0-4 start

The Dolphins have an arrangement with Obama so firing Philbin in London will count against the UK’s unemployment numbers.

Best offensive player for the Dolphins today: the penalty flag.

This is the first time that the Dolphins and Marlins have had their seasons end on the same day.

Coming soon: Robert Duvall stars as Joe Philbin in the thriller ‘We Left You In London.’

The Chiefs got a delay of game after a timeout. In real life.

I just tried to imagine how bad the Texans would be if they didn’t have JJ Watt and I nearly passed out.

Props to HBO for editing Hard Knocks so well, people thought Texans might be good.

I feel like the #Texans change quarterbacks more than I change boyfriends. And that’s a lot.

At least Houston has the Astros?

That Hyundai commercial where a Houston Texans fan celebrates a victory in his car?  Clearly fictional.

What a special day it will be when Matt Schaub is inducted into the Texans Hall of Fame.

Chip Kelly one loss closer to getting an enormous offer to coach Maryland in 2016.

The Eagles still have a shot at the No. 1 overall pick … which Chip Kelly will trade for an old knee brace and the rights to Vince Young.

#Eagles are only down two scores. There. I found a positive.

Dude behind me at Soldier Field: “Jay Cutler makes me drink.”

Jay Cutler just threw a horrific interception near the goal line, so: Yes, he’s back to 100%.

Baby was asleep, but started spontaneously crying the moment Jay Cutler was picked. The sound was off and everything. #DisturbanceInTheForce

Welp this looks like so many other Sundays. #Redskins

Tell you what, Kirk Cousins throws a confident incompletion.

A Jim Irsay field sobriety test is easier on the eyes than the Colts-Jags game.

THE 2015 COLTS: NO REFUNDS, STORE CREDIT ONLY

16 Replies to “Twitter eases the pain of another sordid Sunday”