I’m about to say something I don’t think I’ve ever said before.  Yup, I’m pretty sure these words have never come out of my mouth.  Are you ready?

I’m really looking forward to this hockey season.  There, I said it.  It needed to be said.

We discussed at length last year how I’m a converted NHL fan… or at least a Lightning fan.  I went to about twenty home games last season as did pretty much everyone I know who lives here.  Those of us who live in the Tampa Bay area are desperate for a good sports team.  The Rays can’t hit and the Bucs can’t win.  The Lightning provided a pleasant alternative.  Last year’s run to the Cup engaged a community that had been thirsting for a winner. 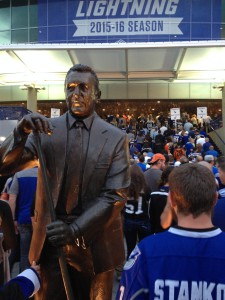 When we last left our beloved Lightning, they fell one Ben Bishop groin, one Tyler Johnson wrist and a few goals short of a Stanley Cup title.  The more experienced Chicago Blackhawks emerged victorious, winning their third title in six years.  The young guns went home with only an Eastern Conference Championship, a hearty feat just not what they wanted.

In 2015-16, anything short of a Stanley Cup title will be considered a failure for the Tampa Bay Lightning.  They are prohibitive favorites to do so.  They return the same young and extremely talented team, just now with a lot more playoff moxie to carry them into June.

A team that led the NHL in scoring, and was pretty stout defensively too, returned to the ice last Thursday night for its season home opener against Philadelphia.  The usual crew and I trolleyed to the arena to pay our respects.

It had only been a few months since we last saw them.  Since their season ran long, the coaching staff called for a light preseason workout, allowing the team to rest as much as possible before another long season began.  If Tampa Bay wants another run at the Cup, they’ll have to play nearly another 100 games.  No rest for the weary. 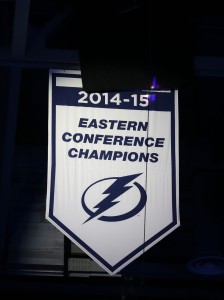 Amalie Arena on opening night was, as one would expect, rocking.  Tens of thousands came to see the revealing of the Eastern Conference Championship banner which for the most part went uncelebrated, understandably.  That’s not the one they want.  No professional athlete settles for second place.  These Lightning players have unfinished business to attend to and by all accounts, they intend to see things through.  And more importantly, they have the talent to do so.

It showed on Thursday night. Not only were fans treated to seeing their team once again, we witnessed history: the very first overtime in the NHL’s new three-on-three format.  While I can see where hockey purists might not like the new overtime rules, I won’t lie.  It was pretty exciting.  And clearly a format that favors high-scoring teams like the Lightning.

It did just that on Thursday night.  The Lightning’s Jason Garrison punched one in two minutes into the overtime period.  It was his second goal of the game.  The crowd erupted knowing this was only the first win of many.

So yes, I’m looking forward to this hockey season.  There will be distractions and bumps in the road but this young team stands on the verge of doing something very special and they’ve got an entire city watching on in support.

There is anticipation. There is hope.  Dare I say this is my favorite professional sports team?  Not bad for a guy who grew up watching no hockey at all.  Consider me just one of the many fans who are along for what is bound to be an exciting ride.