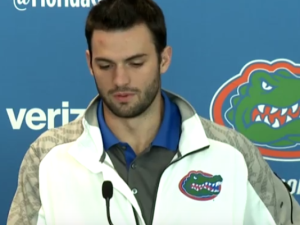 I hate waking up to bad news.

It ruins your whole day.

I was the only one to actually wake up to news of Will Grier’s suspension considering I slept until one in the afternoon the day the news was released.  It turns out I should have slept a bit longer.

The depressing news for Gator Nation spread like wildfire once GridIron Now broke the story.  Between Twitter and Facebook, my phone didn’t stop vibrating for hours.

A season of hope the likes Florida fans hadn’t seen in years had suddenly taken a dramatic turn for the worse.

At first, we didn’t hear why Grier was gone, only that he was suspended for the rest of the season.  What could possibly warrant such a penalty?  Minor drug violations carry a game at best.  Bar brawls or physical altercations about the same, depending on the severity.  Miss class?  Those frivolities are generally overlooked.  What the hell could Grier have done to warrant such a lengthy suspension, putting his team’s season and perhaps his entire college career on the line?

The ever-revolving world of sports giving me things to write about isn’t always a good thing.

The story goes that Florida starting quarterback took an over the counter supplement that “had something in it that the NCAA didn’t approve.”  Hence, the year-long suspension. 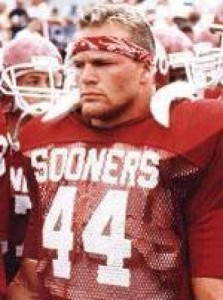 I tried to recall the last time a major college athlete had been linked to steroids.  Brian Bosworth and Tony Mandarich came to mind but that was decades ago.  College football players, perhaps somewhat surprisingly, never get busted for steroid use.  Either they don’t use them, understanding how it could jeopardize their careers or they are smart enough to not get caught.

Will Grier got caught and as it stands right now, will have to wait a year before he ever puts on a Gator uniform again.  Ugh!

Grier was supposed to be the next Tim Tebow.  He was even starting to play like it.  He led his team to a head-turning, program-reinvigorating, 5-0 start.  But two things Tebow never did at the University of Florida were take illegal drugs or sleep with women.

So much for following in another man’s footsteps.

Coach McElwain allowed the dejected superstar freshman to step to the microphone and speak at Monday’s doom-and-gloom press conference.  Again, this was no Tebow moment.  Grier apologized, seemingly contrite and barely able to mutter anything other than “I’m sorry.”

Welcome to the SEC, Coach Mac.  Pimpin’ ain’t easy when you have 105 guys to babysit. 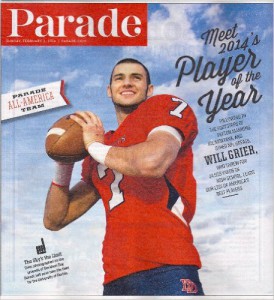 Less than one month ago, I wrote that there are defining moments in a young quarterback’s career.  Wil Grier had one against Tennessee.  He had another one Monday afternoon.  It was a moment he and a million other Gator fans would rather forget.  Before you drink and get behind the wheel of a car, you should know better.  Before you have unprotected sex, you should understand the consequences of your actions.  And if you are a high-profile athlete, you should know better than to take a supplement that could jeopardize your career, your reputation and your team’s entire season.

In the end, Grier has no one to blame but himself.  Florida will appeal the suspension but the damage is done.

So now we wait.

Gator fans are used to disappointment lately.  This one just stung a little differently.  Our shining light at the end of the tunnel has been dimmed.  And as it stands right now, Grier’s shining light will have to wait a full calendar year before it ever flickers again.