“Y’know, one day, Tito Puente will be dead, and you’ll say, “Oh, I’ve been listening to him for years, and I think he’s fabulous.”

Be careful what you wish for, America, because here they come.

As the Chicago Cubs closed out their dreaded rival, the St. Louis Cardinals, on Tuesday night, people everywhere, not just in Chicago, rejoiced in celebration.

Any excuse to party, I guess.

Load up the bandwagon, boys, because it’s a comin’ full steam ahead.

Let’s just say, hypothetically speaking, that I was at some bar that happened to be showing the Cubs game on television that night.  As the game closed down to its final inning, you could hear it coming a mile away.  “I used to live in bla bla bla” and “I remember when bla bla bla played back in the day” and “I’ve been rooting for the Cubs since bla bla bla.”

When Hector Rondon struck out Stephen Piscotty for the final out, I even saw one guy scream “YES!” and jump up and down for joy.

He was wearing a Padres hat.

No self-respecting Cubs fan not related to Tony Gwynn would be caught dead wearing a Padres hat.  Well, at least they’re in the National League.

If you thought Red Sox fans were bad after their 86 year escape from Losersville, stay tuned because you ain’t seen nothing yet.

I’m not saying the Cubs winning a World Series after over 100 years of sucking hind tit isn’t a great thing for sports in this country.  I’m saying the level of obnoxiousness and the amount of Cubs gear you’re about to see in your neighborhood will be enough to make you vomit blue. 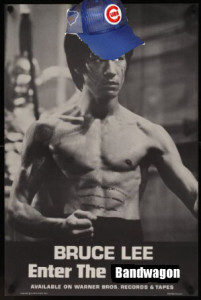 I get that Americans love an underdog considering we were once one but come on.  Do Chicago fans the favor of allowing them to enjoy their moment without shitting all over their parade with your fairweatherness.  I’m pretty sure they’ll be too beer-drunk to notice the sudden spike in Cubs fans around the nation but the rest of us will.   So let’s take it down a notch.

Right before the final out, the guy in the Padres hat turned to a stranger and said rather tritely “We are witnessing history.”  And yes, while the Cubs had never before closed out a playoff series in Wrigley Field, I didn’t want to get all technical and suggest that we are always witnessing history.  For example, that was probably the four millionth time I’ve overheard some doucher stake claim to a team he doesn’t really root for.

My mom was born in Chicago.  In fact, much of that side of the family comes from the area.  That doesn’t mean I’m about to run out and buy myself a Ryne Sandberg jersey and cover myself in ivy.

I wish the Cubs all the best in the world even though I recognize the country may implode if the Cubbies are the last team standing.

If you’ve been a long-suffering fan of the loveable losers then by all means, laugh, cry and celebrate your team’s well-deserved accomplishment.  For the other fairweather fans that do not have a dog in this hunt, do us all a favor.  If it comes to pass that the Cubs defy all odds and win the World Series, recognize it for what it is but spare us all the “I’ve been rooting for the Cubs for years” baloney.

The victory is not yours to celebrate.

17 thoughts on “The Band Wagon Overfloweth”