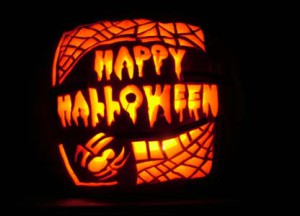 Halloween is a special time of year.  Some people actually dread it.  The whole idea of getting made up or taking care of kids in a sugar coma or shopping for costumes last minute can be kind of a drag.

There was a point in my life when I wasn’t crazy about getting dolled up either.  Then I got into the bar industry and learned to embrace it.  I mean, people are coming into your bar to party and you’re there to show them a good time so why not get into it?

As for me, I like to allow a few liberties in my costuming ventures.  Anybody can be a Mario Brother or a sexy nurse, not that I have a problem with sexy nurses.  The more the merrier.  However, sans rack, it takes originality to come up with a costume that people will be talking about for years.

So, in honor of the impending All Hallow’s Eve, I thought I’d recollect some of my all-time favorite Halloween costumes. 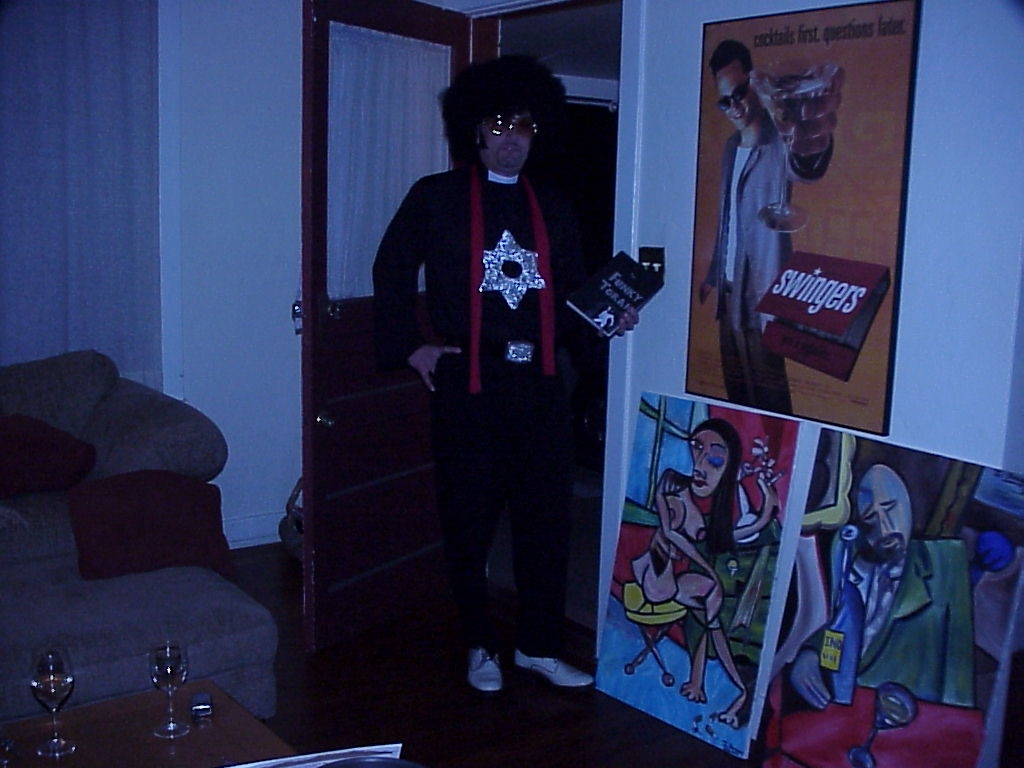 D.J.P. was probably my all-time favorite Halloween costume.  He was a character from different religions and a different era.  And I decked it out to the nines so how could he not top the charts?  Even though the idea was mine all mine, I can’t take full credit for all aspects of the costume.  Years ago, an old friend once went out for Halloween dressed as his alter ego, DJ Arthritic Semitic.  My friend is Jewish, arthritic and a DJ so it made perfect sense.  One of the things that made his costume stand out was his Beastie Boy-like, tin-foiled Star of David.  So I ran with the foil idea and created Disco Jew Priest.  I had an afro, some Elvis glasses and a priest’s outfit with collar, which was the original outfit plan but what Jew dresses up like a priest?  As you’ll soon see, I like to use a little imagination when coming up with my outfits.  It’s as much about attitude as it is about the costume.  Anybody can throw on a collar, black shirt and black pants and walk around in semi-sacrilegious attire.  I kicked it up a notch.  I also sported a sparkling belt, white disco shoes and the coup de grace, my Funky Torah, which was just a hardcover book upon which I had taped a picture of Tony Manero, John Travolta’s character from Saturday Night Fever.  Now you understand why it was one of my all-time favorite costumes.  Let me just say that Disco Jew Priest turned a few heads which is exactly you want out of a Halloween costume.

Menorah Man came out right around the same time as Disco Jew Priest but it wasn’t a Halloween costume.  An ex-girlfriend and I were partying around downtown Orlando with a bunch of other kooky friends that had planned a dress-up pub crawl.  We went from bar to bar in an RV filled with Jell-O shots and enough liquor to kill a herd of cattle.  As is the case in any pub crawl, we traveled from place to place drinking different drinks.  Since it was Christmastime and the girl I was dating and I were both Jewish, we went Old Testament superhero with our costumes.  Unfortunately, I couldn’t come up with any pictures of the evening – they’ve probably all been burned – but let’s just say it was spectacular.  The costume was your basic mask and cape and I recall a friend of hers gluing some sparkly letters on the back of my cape that read MENORAH MAN in big letters, you know, in case people didn’t recognize me.  The highlight of the costume was my Menorah of Justice, complete with candles that I would light at each bar stop.

Let it be known that this picture of me was taken in the early 1970s… which means I was Batman long before Michael Keaton, Val Kilmer, George Clooney, Christian Bale and Ben Affleck.  Not only am I a better actor, I’m also far better suited for the billionaire bachelor lifestyle.  This vintage Batman costume came complete with fire retardant pants, mask and cape.  Bat dog not included. 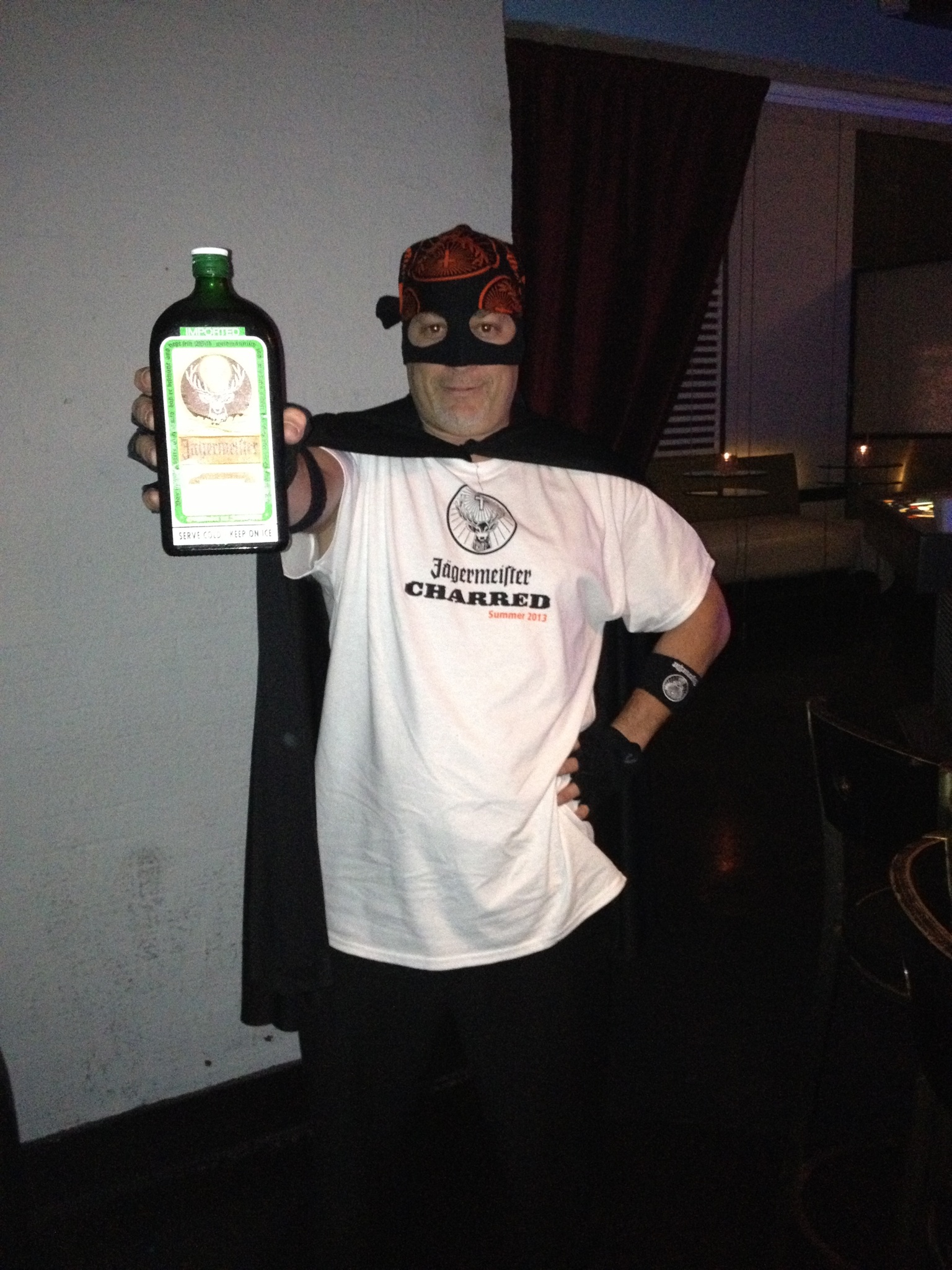 This one came at my old bar.  The theme for the night was super heroes but anyone can curl up his locks and dress up as Superman.  Besides, as you just saw, I was Batman at four so why would I be Batman again at forty-four.  I was big into comic books as a kid.  I was also big into inventing my own super heroes.  So why would that change forty years later?  I asked my Jagermeister rep to give me some swag for the night so that I could come up with a costume and sell the hell out of her product.  She graciously obliged.  She gave me a Jager bandana into which I cut holes to make a mask, a Jager shirt, some Jager beads, some Jager wrist bands, some work out gloves (not supplied by Jager or ever worn at a gym) and of course a Jager cape.  We had some pretty cool super heroes at the bar that night but none quite as cool, or as licoricy, as Captain JagerMeister. 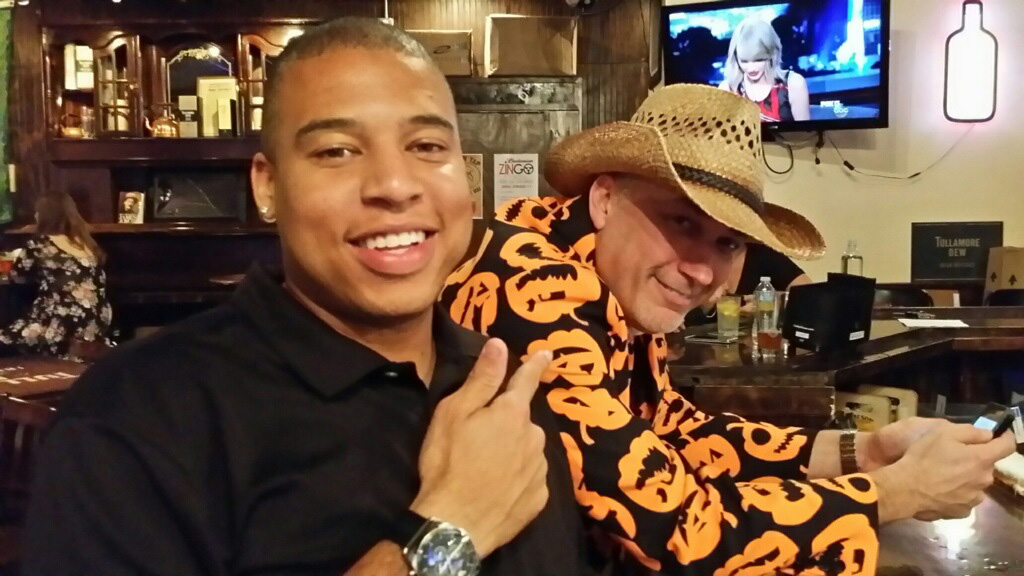 Super Cowboy Pumpkin Man aka The Mayor of Halloween

Walking through the aisles of your local costume shop can be fun as long as you plan ahead.  Going to those same shops on October 30th is no fun for anyone.  You end up waiting on line with something you really didn’t want to buy in the first place but had to considering it was the only thing left on the shelf and you’re an hour late for your party.  You end up with some sorry combination of Groucho glasses and vampire teeth.  One year, I had a little extra cash so I splurged.  I bought myself a pumpkin suit: blazer, pants, tie, the whole nine yards.  Once again, the theme for the evening was super heroes (ORIGINALITY, PEOPLE!!!) but as you’ve already read, I refuse to be just any super hero.  I prefer to give Stan Lee a run for his money.  So I bought the pumpkin suit and a cowboy hat and decided to be Super Cowboy Pumpkin Man.  His super powers included looking good in orange and befriending you with his wide variety of delicious pumpkin cocktails.  Needless to say, SCPM was a hit although to be honest, a friend walked into the bar, saw me wearing the outfit and asked “What are you, the Mayor of Halloween?”  So that kind of stuck.  Besides, Super Cowboy Pumpkin Man needed a secret identity and political office suited him just nicely.  He was definitely dressed for it.

So there you have it, children.  Try using a little originality this Halloween.  Mix and match aisles and ideas.  Nobody wants to go to a party dressed as the same thing as the other guy.  Come up with something that’s uniquely you and I guarantee you’ll be the one they’ll talking about all year.