Saturday surprises continue to fill in the blanks of this college football season.  But before we get into all that, and our fabulous contest, I thought we’d check in with our Big Ten correspondent, Robbie aka Croshere, who was gracious enough to send us his thoughts on his Buckeyes’ first loss of the year.

Okay, now that we’ve got that out of the way, with only one week left in the regular season and plenty of big games left to play, we’d like to think another week brings with it a little more clarity.  Not so fast, my friends.  If we’ve learned anything from season’s past, it’s that nothing is etched in stone.

As Robbie and a about a million other Ohio State fans would tell you, their run to college football’s Final Four was almost a foregone conclusion.  That’s why they play the games.

So what we have left is confusion… and an all-new contest in its honor.

First, here’s how things should, but probably won’t, shake out. 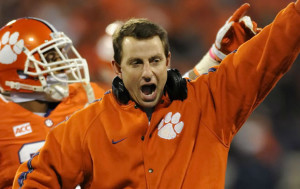 Clemson is currently the number one team in the nation, at least according to the latest rankings.  They have one week left in their regular season, a game at instate rival South Carolina.  It’s one they should win considering USC just lost to Citadel.  Afterwards, the Tigers have the ACC Championship Game against North Carolina.

By all accounts, with two relatively easy games let on their schedule, Clemson should make the Final Four.  But then again, it’s Clemson… and college football.

Alabama is the number two team in the nation and playing like it.  They play a 6-5 Auburn team next week in a game that is a) one of the most historically, seething rivalries in college football and b) always impossible to predict.

Presuming an Alabama victory, they will play the Florida Gators in the SEC Championship Game.  The winner of this game SHOULD make the Final Four UNLESS… Florida beats ‘Bama but loses to Florida State or Bama loses to Auburn but beats Florida.  Even if these teams stumble, it’ll be hard for the committee to exclude a two-loss SEC team out of its tournament.  After all, the SEC is college football’s crowned jewel.

Here’s where things get interesting. 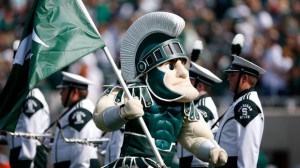 The Big Ten should have a team in the tournament based on that fact that a) there were some really good teams in that conference and b) Ohio State’s dominance set the tone for the season.  With their victory on Saturday, Michigan State now sits atop the Big Ten’s east division and only has Penn State left to play.  Undefeated Iowa still has to travel to Nebraska but they’re already in the Big Ten Championship Game, likely against the Spartans.  The winner of that game should be in UNLESS one of them stumbles.  The committee would likely put a one-loss Spartans team but maybe not a one-loss Iowa team if they lose in Lincoln to a team that needs just one more win to be bowl eligible.

Then we have the Big 12.  With no championship game (and yes, there used to be one but no longer is which makes perfect sense), the winner of this weekend’s Oklahoma-Oklahoma State has a huge bearing on the last team to be invited to the dance.

If Oklahoma wins at Oklahoma State, they will make a serious bid for the final spot.  They will have won their conference with only one loss.  The only problem is that loss came to the 4-6 University of Texas, traditionally a powerhouse but this year a doormat.

Let’s just say if these four teams got in, there would be more than a few, angry Irish Catholics around.

Notre Dame, who has no conference affiliation other than the one they share with NBC, is 9-1. They travel to 9-2 Stanford, the best team in the Pac-12, the power conference most likely to be excluded from the final four. 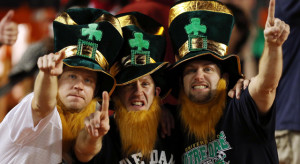 If Notre Dame wins at Stanford, it’ll be real tough to keep them out of the tournament unless someone stumbles.

So basically, we have five teams that we know about, vying for four spots.  Unfortunately for one of these unlucky schools, college football has no plus one.

Of course, there are still plenty of games to play that will un-muddle the waters (the committee hopes) but assuming one legit contender gets left out, which is an extremely likely possibility, I fully expect the NCAA to gather its forces and look into expanding its playoff system yet again.

That’s not a bad thing.  After all, it means more college football.

With all that being said, since the sport is about as predictable as the winning lottery numbers, I thought I’d hold a contest showing how little we know about what the next fifty days hold in store.

Here’s how the contest shall go.

In the comments section below, list the four college football teams you think will make the final four.  You will get ONE point for each of those teams you pick correctly.

Here’s where things get tricky.  I then need the two teams you think will play for a national championship.  You will get THREE points for each of those teams you pick correctly.

And finally, I need your national champion.  Correctly pick the last team standing and you’ll be allotted FOUR big points. 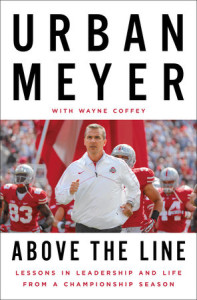 As a tiebreaker, I’ll need the total points scored in the national championship game.

As usual, there is no entry fee to this contest.  The winner will receive a comfy SportsChump t-shirt and their own copy of Urban Meyer’s brand new Above the Line: Lessons in Leadership and Life from a Championship Season.  Get it while it’s hot since he won’t be writing one again this year.  If you’re a Buckeye, this will make the perfect, belated Christmas present.  If you’re a Florida Gator, it’ll make for good firewood.

Please note that all entries MUST BE RECEIVED BEFORE THE COLLEGE FOOTBALL GAMES KICK OFF ON SATURDAY, NOVEMBER 28TH!

Best of luck to all! Happy picking and have an even happier Thanksgiving!

16 thoughts on “When murky unmurks: College football’s long and winding road and a contest to end the season”