Have you ever had one of those full off days?  You know the kind where you have a ton of things to do and the stars align just right so that you get everything done and experience the high of one extremely fulfilling day?

That was the essence of my last Thursday.

After pampering myself with a massage (after all, I’m special) and hitting the Tampa Bay History Center for a fancy meal and personalized walk-through of Florida’s jazz and blues history exhibit, it was off to the main events of the evening.

In case you’ve been living under a rock, the National Football League has come under a great deal of scrutiny lately for its (mis)handling of the concussion crisis it faces every time its players take the field. 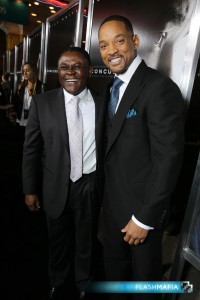 A Nigerian born doctor by the name of Bennet Omalu is quickly becoming a household name, not only because he is being portrayed by Will Smith in the upcoming film “Concussions” but because he feels the NFL isn’t doing all it can to prevent such injuries from happening.

So he sold his story to Hollywood.

Omalu was giving a free lecture in downtown Tampa Bay.  Clearly this was an event worth attending.

I arrived early at the concert hall where years earlier I had seen a taping of The Daily Show.   Dr. Omalu didn’t quite pack the house like Jon Stewart but there was definite interest considering the well-being of a sport and all those who play it are at stake.  All things considered, this man’s story has the potential to blow the roof off a league which profits off its employees beating the tar out of each other and has for years been criticized for not doing all it can to protect their health.

As we’ll all soon find out, and perhaps some of us already know if we’ve read the book, Omalu discovered that repetitive trauma to the brain leads to what he called CTE (chronic traumatic encephalopathy).

Now, one doesn’t need to be a brain surgeon, no pun intended, to realize that repeated blows to the head aren’t good for you.  All you have to do is listen to Evander Holyfield try to complete a sentence.

I’ve only started reading the book, the very paperback I had the doctor sign after his lecture, but I can tell you the book will ruffle some feathers.  It already has.  I can also tell that the movie may, and perhaps should, paint the Nigerian doctor out to be some sort of a kook.  After all, Omalu did take Mike Webster’s brain home, with the family’s consent, to further study the effects of CTE. 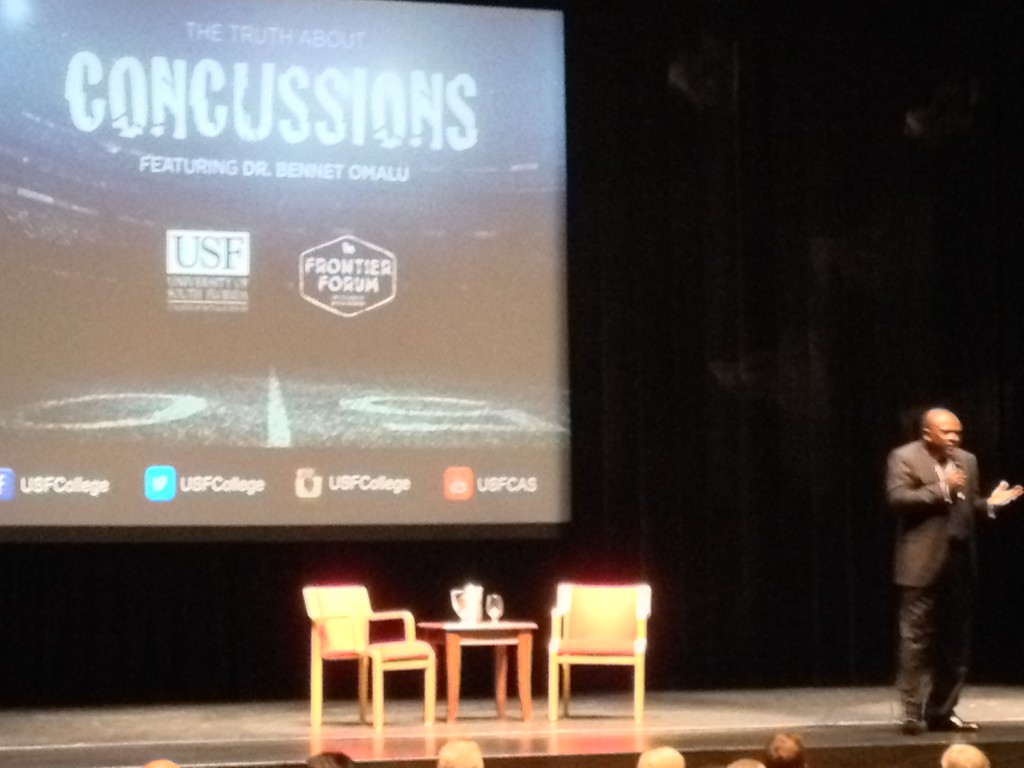 Omalu received not one dime of research money.  He did much of this work on his own because he wanted intellectual independence.  He wanted to own the discovery.  After listening to his lecture, let’s just say I can’t wait to see how certain scenes will be portrayed, especially the part of him keeping athletes’ brains in his fridge for six months at a time.  He also claimed to “talk” to Mike Webster posthumously, that although he was dead, his soul was still alive.

Despite how bizarre this all might sound, Omalu’s unconventional actions are enough to keep the NFL’s suit pants a little tight in the seat.

Dr. Omalu’s overarching message, which will ruffle more than just the NFL’s feathers, is that parents should not allow their children play football due to the potential brain damage it can, and will, eventually cause.  Apparently not too many people are listening.  He told the story of a Texas woman with whom he shared his message of the dangers of allowing her son to play high school football.  She scoffed at him, saying football in Texas is a religion.

Omalu was resolute in his cause.  He also claimed the NFL has yet to reach out to him.

I’m no parent but I can tell you my mother never allowed me to play football for just those reasons.  She didn’t need a medical degree to figure out bashing my skull in was probably bad for me.  Call her ahead of her time.  Moving forward, we’ll see how many parents heed Omalu’s message… and considering the overwhelming popularity of football in this country, how long his fifteen minutes will last.

But my evening wasn’t done with the brain surgeon.

Earlier that evening, I was dining on some black bean soup at one of Tampa’s finer restaurants when I received a text from Luke of the Perfect Hair.  John Taffer was in town and televising the re-opening of a brand new bar in Tampa. 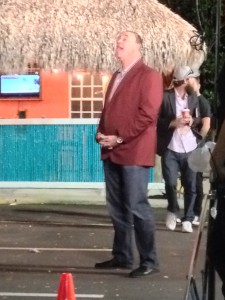 Now, if you work in the service industry or have ever poured a drink for someone, you probably know who John Taffer is.  If you don’t, you might want to reconsider your line of work.

John Taffer is most famous for his show Bar Rescue in which he rescues failing bars that are in the red for a number of reasons: gross inefficiencies, inappropriate themes, poor management, and filthy environs.  You name it.  If it’s ruined a bar, Taffer has tackled it and as his show boasts “turned money pits into money makers.”

As a professional bartender, I watch his show religiously just to keep up with current trends and make sure what I’m doing behind the bar makes sense.

Taffer was renovating a bar in the area called Dale 1891, a place where I had been only once to catch a Monday Night Football game years ago.  In the midst of the game, I heard some Brazilian music blaring in the background.  Don’t get me wrong, I like to samba as much as the next guy but not while I’m watching football.

Dr. Omalu would SO disapprove.  To date, samba has caused far fewer concussions than football.

Needless to say, with the conflicting volumes, the bar needed some help with their message. 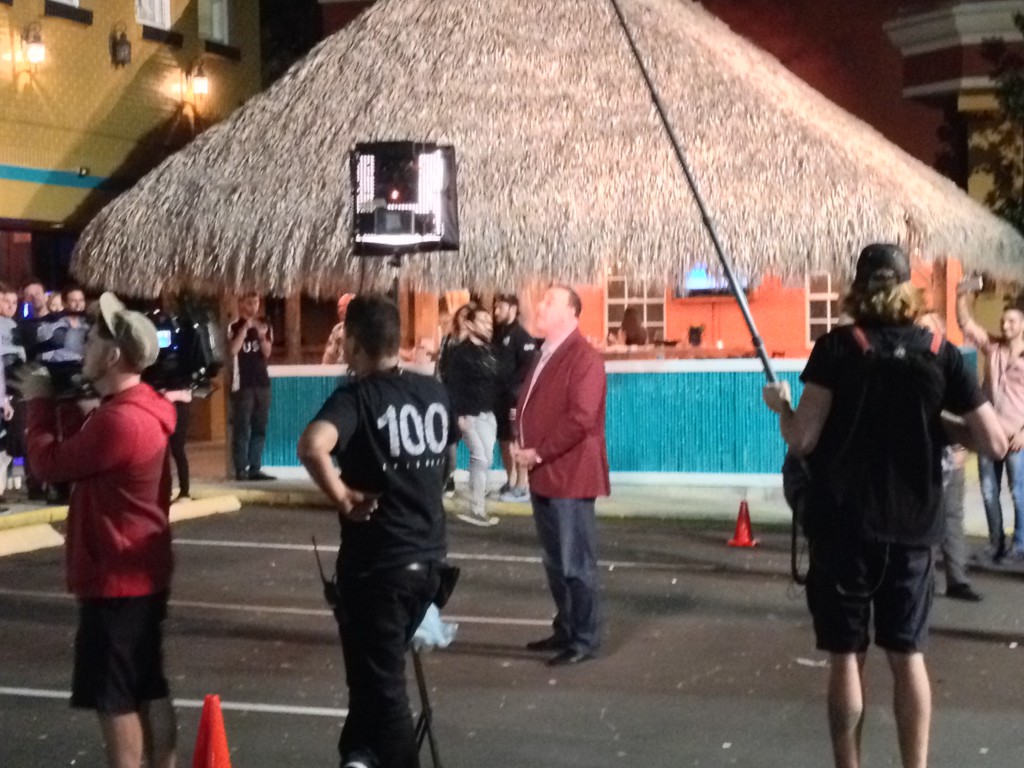 The gist of Taffer’s weekly program is to peruse a place by setting up hidden cameras, finding out what’s going wrong, go in there to yell at some people, retrain the staff, come up with an entirely new (and more profitable) theme for the bar, then leave within a few days once the bar has been “rescued.”

So we drove across town to the see what the service industry’s most popular man had done with the place.

After signing an affidavit, having to switch my shirt inside out for no logos to be shown on camera and waiting in line for about ninety minutes, we decided to bail on the Taffer plan only when we heard it would be another hour before we were even allowed in.

But we did get to see him address the crowd in his usually abrasive Taffer style.  He assured those waiting in line that there were no actors involved and that all his episodes are real, which I never doubted considering all the service people in his shows are pretty damn bad actors.

And so, my very full Thursday came to a close with a final drink at my own successful bar and two certainly certifiable celebrities in my rear view mirror.

It was a whirlwind of a day.  I love it when a plan comes together.

13 Replies to “Concussions and concoctions: Just another star-studded day in the Bay”