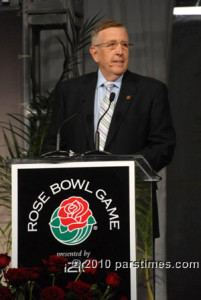 I have this very dear friend.  He goes by the name Jackal.

Jackal and I were having a relatively meaningless conversation about sports (and probably girls) the other day when he mentioned something in passing that I found kind of odd.

Brent Musburger was smackdab in the middle of calling the Rose Bowl, the Granddaddy of them All.  His unmistakable voice boomed through the barroom speakers, as one would expect if one were listening to college football on the very first day of the calendar year.  That’s when Jackal turned to me and said “I hate Brent Musburger” and that he “couldn’t wait until he retired.”

That struck me as odd considering Brent Musburger has been calling sporting events almost as long as I’ve been alive.  For the longest time, I can recall and associate countless, huge sporting events I’ve listened over the years to voices like his, Al Michaels’, Keith Jackson’s, Verne Lundquist’s, Dick Stockton’s, Marv Albert’s, a list of veteran and venerable sports announcers whose iconic voices have become an indelible and unmistakable part of our sports landscape.

I wouldn’t outright say I “hate” any of these guys.  If anything, they’re to be revered, the whole lot of them. 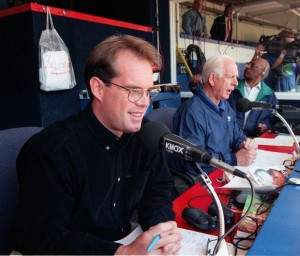 Sure, there are guys that get on my nerves like Joe Buck but that’s only because he found his way into a broadcasting booth because of the last name he carries.  Joe’s father Jack did St. Louis Cardinals play-by-play for nearly fifty years.  All I got from my dad was a receding hairline and an innate affinity for alcoholism.  But I can’t hate Joe Buck if that’s what he wanted to do with his life or for using his name to get it.

Buck’s former booth partner Tim McCarver also tends to be on the annoying side but in the grand scheme of things, we have worse things to complain about.  Besides, Musburger was probably calling games when McCarver was still playing pro ball.  (SportsChump fact-checkers prove that factually correct.  Musburger debuted on CBS’s NFL Today in 1973; McCarver played for the Phillies until 1980).

That’s a long damn time to be calling ballgames.

Musburger is now 76 years old.  And he’s still going strong.  Sure, he’ll blurt out something kooky and perverse, like how he fawned over AJ McCarron’s girlfriend during the Alabama-Notre Dame national championship game a few years ago.  So what if he’s a dirty old man.  It’s not like he’s going all Cosby on us.  Marv Albert wears women’s underwear.  We overlook these things when guys get into their eighties, a lifetime achievement hall pass for even making it that far.  If you walked down the street and saw an old guy sitting on a park bench feeding pigeons, you wouldn’t say you hate the guy, would you?  Of course not.  That’s just mean. 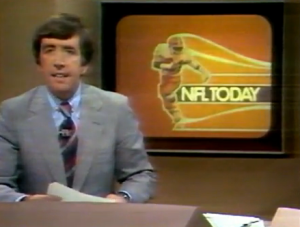 Brent Musburger has called more sporting events than you and I could ever care to put on our bucket list.  The guy was calling NFL games before Walter Payton was even in the league!

These guys are sports casting icons.  If a guy is still better at his job than anyone else, and he’s seventy-something, that probably means he’s doing something right and certainly better than the young bucks, no pun intended, trying to break into the industry.

So it’s about time we appreciate all the old guys in the sports booth.  They’re not going to be around for much longer.  They were one of a kind, really the first generation of men whose voices we learned to associate with the sports we grew up listening to.

I say enjoy them while they last.

30 Replies to “The inexplicable whys of hating Brent Musburger”