I woke up groggy yesterday morning.  Stumbling to the kitchen, I made myself some coffee, careful not to trip over anything on my way to the grind.

Once my eyelids became unstuck and rest of me became somewhat coherent, I took to social media to see what was on the agenda for the day.  I had just written a piece on the Race and the NBA that I wanted to post before hitting the gym for some well-needed yoga.

Those plans were about to change once I saw that the Beatles were in town. 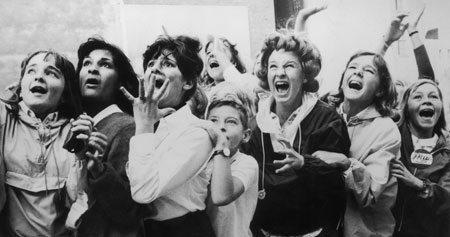 We’ve talked about my Stevie Ray Vaughn rule before.  It’s about living life with no regrets.  It harkens back to the day I chose not to see SRV play at the New Orleans Jazz & Heritage Festival only to have him die tragically in a helicopter crash three months later.

The Golden State Warriors were headed to Amway Arena some eighty miles away.  I had done nothing but write about this historic team all season long.  It was time for me to take a road trip.

After taking far too long to traverse Interstate 4 thanks partially to a late start but mostly to construction that has gone on for far too long, I arrived in downtown Orlando an hour and a half after departure.  I parked my car within walking distance of the stadium.  It was a brisk 62 degrees.  Good thing I layered up.

I didn’t have tickets, assuming I’d be able to buy a reasonably priced single from the box office.  I was wrong.  When I asked the rather inhospitable and certainly lacking in sales skills lady behind the window about the best tickets available, she said the lowest priced upper bowl tickets were going for $150.  Those closer to the court were going for over $500!

Crikey!  I was willing to splurge but I wasn’t expecting that.  Off to the scalpers I went.

I found some pretty exorbitant prices on the streets but nothing close to five bills.  Who would have thought the NBA would try to rake me more than the street sweepers?

After brushing off several sweet-talkers, I finally found one man who would sell me his lower bowl seat for $200.  After handing him the cash, I walked into the arena and handed security my ticket.  The alarm went off.  The ticket was no good.  The evening had suddenly gone awry.

I quickly turned around, looking to see if the man who had sold me the ticket was still outside.  Somehow, someway, the world’s nicest scalper was there waiting to confirm my entry.  When he saw me walk back out, he handed me my money, apologizing. I guess he didn’t want a bad Yelp rating.

Another gentleman who had overheard our transaction offered me his tickets, which were better, for the same price.  Sixth row, baseline, to see one of the greatest teams ever assembled… for $200. Yes please. 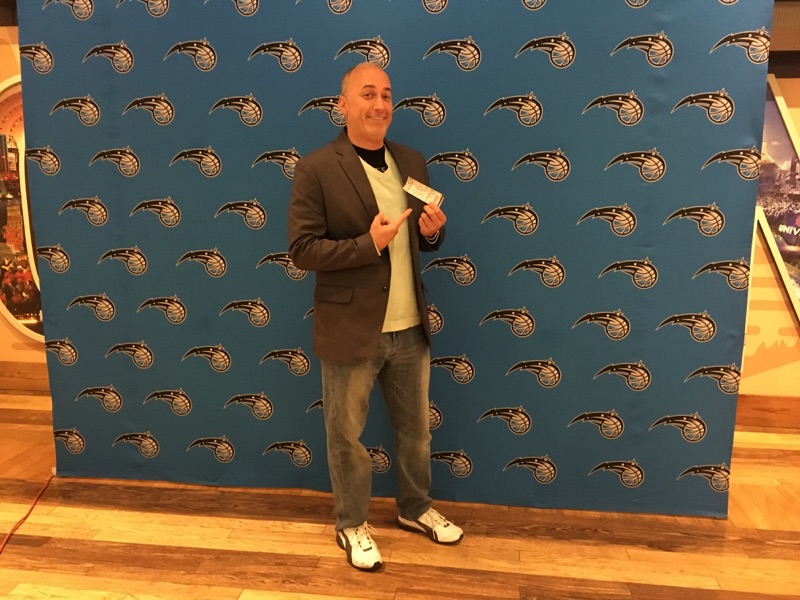 After grabbing a cold brew, I sat down in my seat, secretly ecstatic with my purchase and unsure of whom to root for.  A Magic fan for so many years, this Golden State team is hard, and often pointless, to root against.  At least that’s what much of the arena thought.  Amway Arena, which is beautiful by the way, was overrun with Golden State fans.  I couldn’t help but wonder if they drew that sort of crowd everywhere they went.

Shortly after seven p.m., the ball was tipped.  The game, and its brightest star, did not disappoint.  Early on, Steph Curry drew both Elfrid Payton and Victor Oladipo defensively.  It made no matter.  Curry had fifteen points in the first quarter.

Despite his hotness’ hotness, the Magic played well, at least for a while.  Leading 63-59 at halftime, they had held Curry to only 22 points.  This is me laughing under my breath.

Then came the third quarter that made me and 19,000 other fans feel whatever we paid for our tickets that night was well worth the price of admission.

To put it simply Stephen Curry went off.  I mean, he was lights out.  The likeable star was drawing oohs and aahs with every basket.  The man is single-handedly making yellow fashionable. 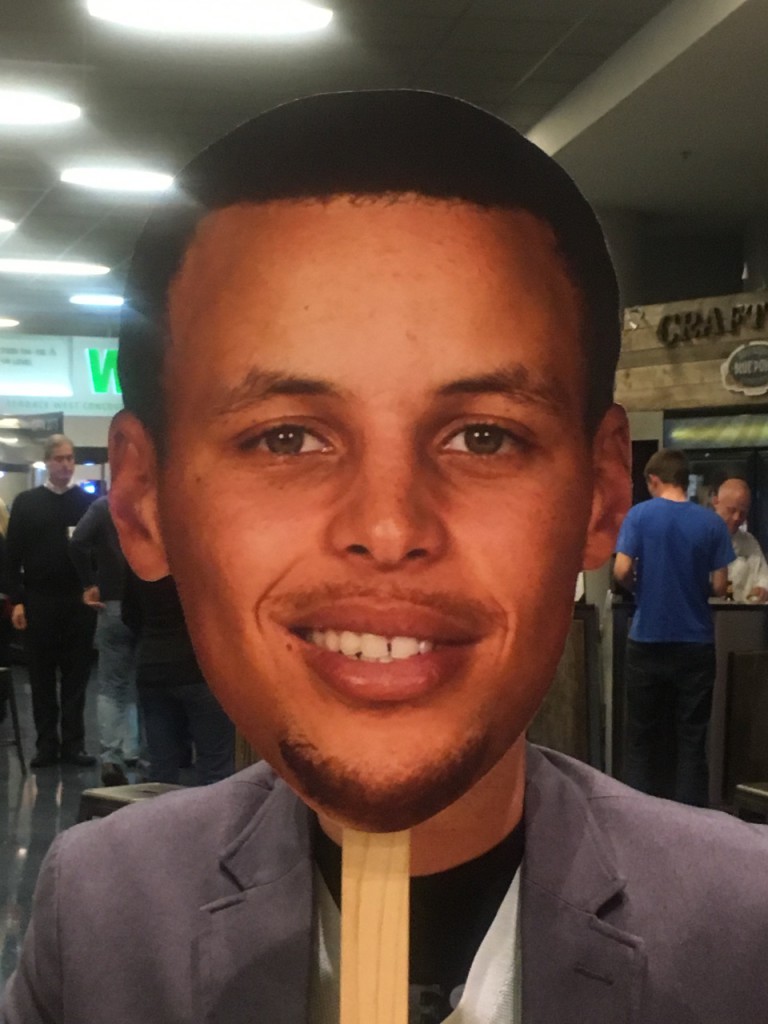 He had scored 32 points midway through the third quarter after having sat out for much of the second.  It soon became clear that the only person who could stop him from scoring was his Coach Steve Kerr.

Up by five, the Warriors inbounded the ball with and three seconds left.  Curry caught the inbounds pass, took a few swift dribbles and launched a shot from half court.

Soft bank in and… effortless.

The crowd cheered, knowing all along the ball would go in.  How could you not?  It’s what we all had paid to see.  He finished with 24 points in that quarter alone. 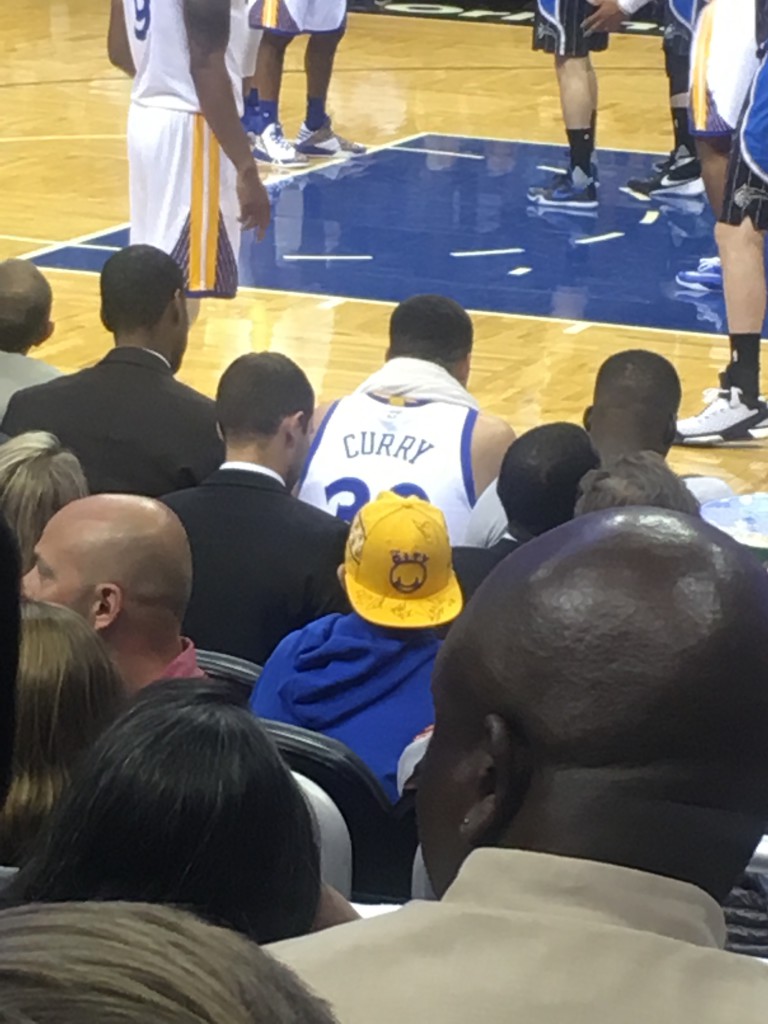 I don’t mean to make it sound like Steph Curry was the only person on the floor that night.  Marreese Speights played extremely well off the bench for Golden State.  With 14 points, he was actually the Warriors’ second leading scorer.  He must have been happy to be back in Florida, hours where he played his college ball.  For the Magic, the Frenchman Evan Fournier and recent slam dunk runner-up Aaron Gordon both played well but they were no match for the defending champs.  It’s not them we came to see.  Shouts of “Curry” rang from the rafters.  Kids and adults of all ages wore his jersey.  The man has officially catapulted himself into superstardom with good reason.  I wouldn’t have driven to Orlando otherwise.

Midway through the fourth quarter, with a comfortable lead, Curry re-entered the game to chants of MVP.  Keep in mind I drove not to Oakland for this game.  It was played in Orlando.

Curry had scored 46 points in two-and-a-half quarters.  Steve Kerr put him back in to get his fifty. 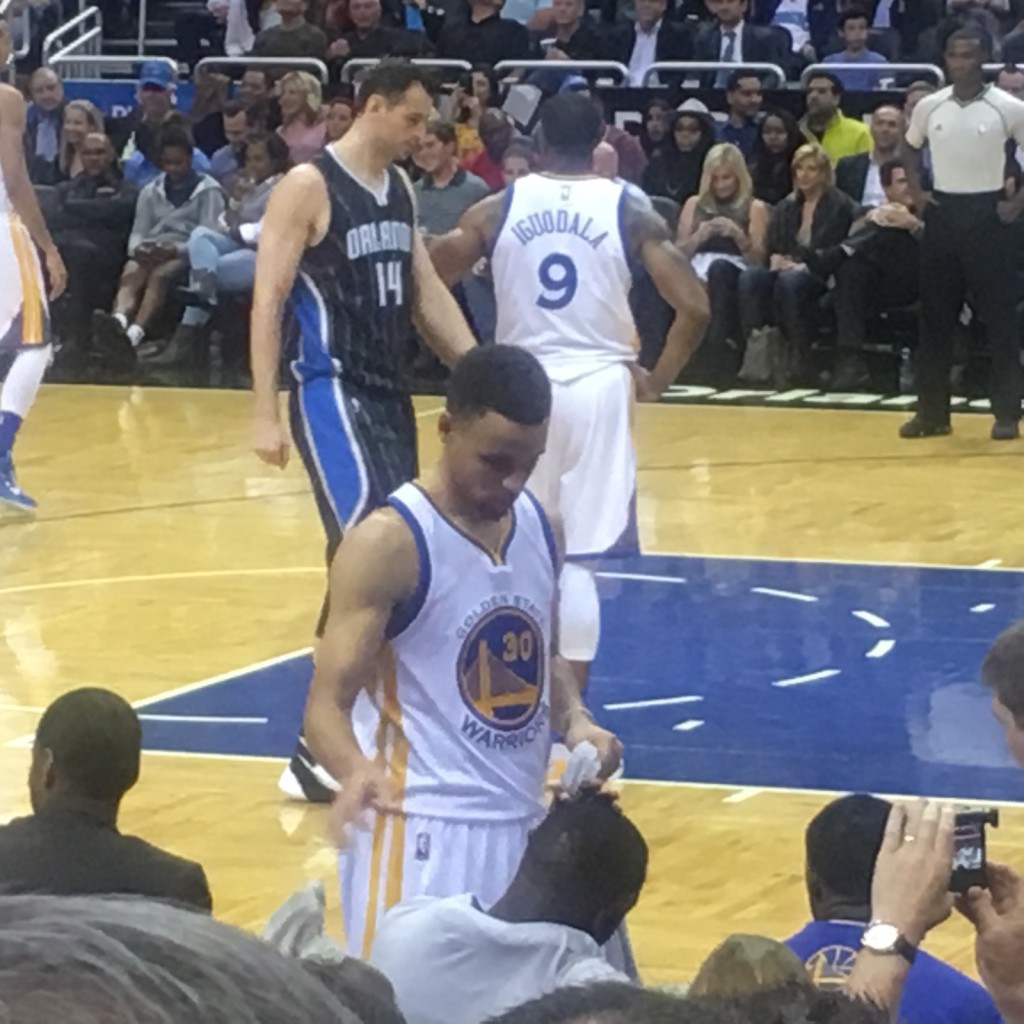 The evening was record-setting.  With that effort, Curry has now hit a three-point basket in 127 consecutive games, a new league record.  In addition to that, according to Elias Sports Bureau, he became the first player in NBA history to score fifty-plus points while attempting one or fewer field goals.

And I was there.  No regrets.  Thank you, Stevie.

If you still don’t believe Stephen Curry’s a draw, here’s a fact for you.

I was talking to a man on line in the men’s room after the game.  Both he and his son were wearing Curry jerseys.

We were marveling about his 51 when the man confessed that he and his family had planned their entire vacation around this one game.  They were visiting from Vancouver, some 3,000 miles away.  He was grinning from ear to ear, knowing this was a trip neither he nor his son would ever forget.

In other words, even Mickey Mouse took a back seat to Stephen Curry.  It’s a good thing he didn’t disappoint.

23 Replies to “The night I saw the Golden State Warriors”