It looks like the old school and new school are at it again.  It was only a week ago that Oscar Robertson implied Steph Curry is having the season he’s having because NBA coaches don’t understand defense.

Well, a similar debate between old school and new is happening on the baseball diamond, so much so that the discussion might just find its way into the commissioner’s inbox. 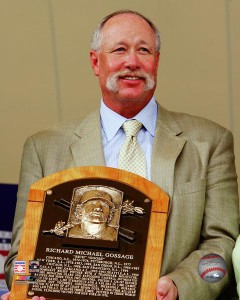 In a recent interview with ESPN, a network never accused of creating its own story, 64-year old Hall of Famer Rich Gossage blasted one of the modern game’s most notable power hitters for how he’s disrespecting the game.

“[Jose} Bautista is a f—ing disgrace to the game,” Gossage told the four-letter. “He’s embarrassing to all the Latin players, whoever played before him. Throwing his bat and acting like a fool, like all those guys in Toronto. [Yoenis] Cespedes, same thing.”

Never mind that Gossage was referring to one of the biggest moments in Blue Jays’ history, a series-clinching home run that sent Toronto to the American League Championship Series.

On the flipside, one of baseball’s bright, young superstars, 23-year old Bryce Harper contrasted Gossage’s sentiment, calling baseball a “tired sport.  You can’t express yourself,” Harper continued.   “You can’t do what people in other sports do. I’m not saying baseball is, you know, boring or anything like that, but it’s the excitement of the young guys who are coming into the game now who have flair.”

There was once a time in baseball history that if you flipped your bat after hitting a home run, you better prepare for a high hard one the next time you stepped to the plate.  These are baseball’s unwritten rules.  They exist to this day, like ordering the code red. 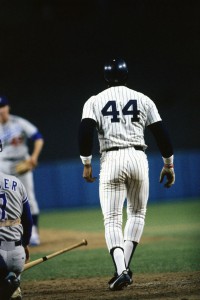 Showing up and the retribution that follows it have been a part of the game since its very first pitch.  Ty Cobb sliding into second base with his cleats raised high, Pete Rose barreling into Ray Fosse during an exhibition game and before Gossage calls out the new school, we should remind him that his old Yankee teammate, Mr. October, was one of the most notorious bat-flippers around.

All of those Hall of Famers could back it up.  They also provided us with moments that live on in infamy, just as Bautista did last fall.

So my question is… is the bat-flip good for the sport?

Harper may have a valid point about the sterility of the game.  The NBA lionizes the dunk; it’s one of the game’s most marketable tools.  The league even hosts a mid-season contest in its honor.  During games, a player can throw the ball off the glass, put the ball between his legs, put his hand behind his head and BOOM goes the dynamite.  We celebrate moments when players “posterize” others.  Rarely are they whistled for technical fouls.  NFL players spike the ball regularly after touchdowns.  They spend time inventing end zone routines to outdo each other and while yes, referees do often keep them in check for unsportsmanlike conduct, more often than not, touchdown celebrations border on the obnoxious.

That’s where baseball has always been different.  Major League Baseball has never needed umpires to monitor that sort of behavior.  The 95-mile per hour fastball to the eardrum was all the checks and balances you needed. 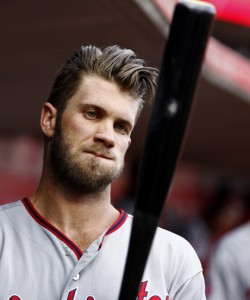 Show me up and I’m gonna sit you down.

So does baseball have a problem?  Is the game ‘tired’ as Bryce Harper suggests?  Would more flip and circumstance draw interest or is this much ado about nothing?

Personally, I think there’s plenty of gray area.  While the last thing we want to see is Big Papi flip the bat every time he hits a pop fly to shallow center, which is pretty much what he does anyway, I’m not offended by seeing a guy toss his bat with flair mostly because a) I’m not the one who threw him that pitch and b) I know the guy who did is making a mental note of it.  He’s marking his calendar for their very next meeting.

Should the sport consider penalizing its players for poor sportsmanship or should it let them continue to police themselves?  If it ain’t broke, don’t fix it… but is baseball broke?

While last year’s World Series did see a slight spike in ratings from the year before, ratings are still down substantially from 80s, 90s and even early 2000s.  Short of allowing players to juice again, perhaps the league should entertain ideas that might attract more viewers.

I’m not sure there’s a tasteful way to allow for more showmanship without being unsportsmanlike.  Lord knows we wouldn’t want to upset the Goose again.  All things considered we should probably entrust the next generation of players to carry on the unwritten rules of yesteryear.  It’s the way it’s always been.  Remember, Bob Gibson and Don Drysdale were once rookies too.

And if a guy has to be suspended a few games for throwing a fastball at a batter who once showed him up, I’m pretty sure he’ll be okay with it.

After all, some things never change.