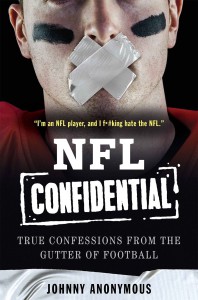 Originally published in 1970, Jim Bouton’s Ball Four was the first of its kind.  Commonly considered one of the greatest sports books of all time, it was groundbreaking in the sense that it was the first ever work to take readers inside the locker room of a professional sports team.  Bouton received both a great deal of fanfare and criticism for exposing clubhouse secrets.

There’s another book on the shelves now that has the potential to ruffle just as many feathers.  That book is entitled NFL Confidential.  The only problem is… we don’t know who wrote it.

Here’s what we know or at least we think we know about the author who dares us to guess his identity as he tells his tale of playing professional football.  He is an offensive lineman (“Fuck forming a wall, we’re a big, fat, beefy ballet”) who hails from Ohio (we think) and whose primary dream is to become the “Best NFL Backup Ever,” a term he embraces so much he trademarked.  He has no desire to be the best football player ever and he most certainly doesn’t want to put his body through the wear and tear of a professional football career.  Instead, he opts to “beat the NFL at its own game.”  Who can blame him?

The book flows well. It’s an easy entertaining read that has its comical and insightful moments.  Of course, all names and identities are changed to protect the innocent, so much so that it keeps you guessing throughout.  Who is this guy?  What team does he play for?  What coaches and players is he talking about?  While focusing on what he goes through in a single season, you can’t help but read it and try to guess who this man is, even though odds are even the most knowledgeable fan hasn’t heard of him.  After all, how many backup offensive linemen, or even starting offensive linemen can you name?  NFL Confidential is an NFL game of Clue:  The offensive lineman did it in the locker room with his playbook.   The guessing game does make the read more enjoyable, along with his graphic stories about how as an undersized lineman, he had to stuff his face and carefully monitor his bowel movements.  Aside from the occasional poopy humor, he also touches on far more important yet equally as real topics such as homosexuality, racism, domestic violence and the business of the league. 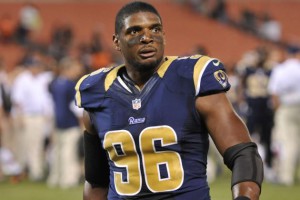 On homosexuality: “It’s no secret there’s a ton of homophobia in this business.  I mean, you’ve got a sport full of southern conservative hillbillies, black dudes who devour rap culture, and players from both races who call themselves born-again Christians.  Then you pay all these guys a shitload of cash to act like hypermasculine warriors, all while wearing tights and showering together.  Are we surprised there’s some sexual insecurity?”

On racism: “Most of the time we just laugh like hell about how ridiculously human we all are.  And when the bad shit happens, we talk it out and move on.  We don’t just bury it – like everyone else in this nation – where no one can find it.  We bring it out in the open, we mock it, we fuck with it, we laugh about it until it’s not a threat, until we strip it of all its power.  So yeah, we got racism in the NFL.  We just handle it better than everyone else.” 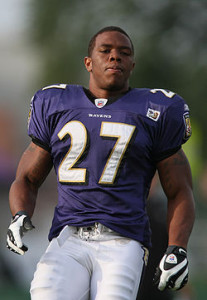 On domestic violence: “My line of work rewards guys for being hyperagressive maniacs.  Not condones, rewards.  The guy who’s most aggressive, who’s most vicious, who’s most relentlessly psychotic on the field will succeed.  I learned a long time ago how to cordon off that anger… but many players don’t know how to create that separation.  How does the League deal with this violent streak?  By treating us to seminars, of course.  Meetings!  The answer to all life’s problems.”

On business of the league: “I hate how much the NFL focuses on winning.  Drives me nuts.  The League markets winning as a matter of pride and honor. Like there’s morality behind it, and if we win, that somehow means we’re good human beings, and if we lose, we’re scum.  That’s all garbage.  It’s simple economics.  If we lose, fans won’t like us.  If fans don’t like us, they don’t buy our shit.  If they don’t buy our shit, we’re all out of fucking jobs.”

Like Bouton before him, our author who goes only by Johnny Anonymous takes us inside the NFL locker room and does a fair job of enlightening us as to the life of an NFL player.  In Confidential, we get a little dirt.  Ironically, the book is honest about everything except anyone’s identity.  And it’s well-written.  I’m not sure it’s as head-turning as Ball Four was, not that it ever intends to be.

I wanted dirt dirt from NFL Confidential.  I’m just not so sure I got it.  NFL Confidential  is good.  I’m just not quite sure it was as applecart-upsetting as I expected.  When the tagline of your book is “I fucking hate the NFL,” I want to know why.  There are plenty of people who hate their jobs and live a miserable existence.  What makes your gripe so special?  Or maybe it’s this… “The attitude of most linemen I know is resignation to their fate. They’ve been football players most of their lives, and they didn’t start playing because they thought it was a peaceful game.  They know they’ll be fucked eventually, they know they’ve already failed themselves with years of hard hitting, so they figure they’ll make as much money as long as they can still play, then never have to work again.  The fact that they won’t remember their grandkids’ names just isn’t a pressing matter right now.”

If you follow the NFL closely enough, I’m not entirely sure there’s anything Johnny tells us we didn’t already imagine went on inside an NFL locker room.  NFL Confidential just brings it to the forefront.

And the biggest surprise of all is that we come to find out this man loves football.  There are times where he WANTS to play, especially when the players ahead of him are struggling, which goes against his entire premise of wanting to be the best back-up ever.  Therein lay the rub.  What we have here is a book from a man who allegedly hates the league yet loves the game. 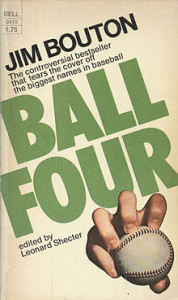 NFL Confidential successfully reminds you of the realities of the league and of those second and third stringers whose names you’ll never know and football cards you’ll never own.  “Nobody even acknowledges my existence. This is life as a third stringer. We’re expendable, we could be gone at any time.  Why would anyone waste their time?”

It reminds you they’re real people, with real needs, real relationships and real problems.  It’s a fun read for the NFL fan.  It’s not Ball Four but it doesn’t need to be to still be entertaining.