I’m not sure what’s going on with old people these days but there must be something in the nursing home cafeteria food that’s making them cranky.   First we had Oscar Robertson belittling Steph Curry’s MVP season by criticizing the modern state of the NBA.  Then we had Goose Gossage say Jose Bautista was disrespecting his race by celebrating home runs a little too flippantly.  Now we’ve got Dan Shaughnessy cracking on Geno Auriemma and his once again undefeated UConn women’s basketball team.

Let’s be clear about one thing both Shaughnessy and I agree upon.  UConn’s dominance is unmatched.  The 2016 Golden State Warriors aren’t that dominant. Ronda Rousey wasn’t.  Tiger Woods wasn’t.  Heck, it wasn’t all that long ago that an Auriemma coached team bested the long-standing UCLA men’s basketball record for consecutive wins.  Between 2008-10, UConn won 90 consecutive games.  They are currently in the middle of another sixty-game win streak and are two wins away from a fourth consecutive national championship. 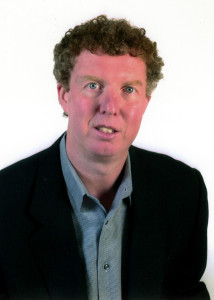 That, my friends, is dominance.

Yet, in a single Tweet, the Boston Globe’s Dan Shaughnessy, who has written for that newspaper since Larry Bird was wearing short shorts, said what they were doing was bad for the sport.

“UConn Women beat Miss St. 98-38 in NCAA tourney. Hate to punish them for being great, but they are killing women’s game. Watch? No thanks”

Shaughnessy’s comments weren’t Don Imus-like but they certainly weren’t flattering for the game.  Picking on a bunch of teenage girls who a) are the very best at what they do and b) are doing their best to perpetuate interest in their sport for an entire gender is in poor taste.  Shaughnessy should have known better.  Clearly, he didn’t.

Let’s be honest.  Women’s college basketball isn’t exactly drawing flocks of viewers to their television sets but ratings are on the incline.  It’s enough of a struggle for nineteen to twenty-three year old women who are doing what they love to draw fan interest without some dinosaur blowhard Tweeting about how they’re bad for the game. 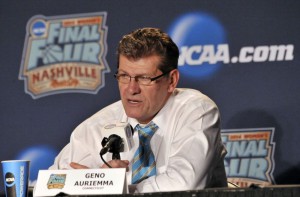 Have no fear.  Enter their head coach, mentor and perhaps one of the most underappreciated head coaches of our time: Geno Auriemma.  I mean, the guy has won ten championships and he ain’t done yet.

Geno’s not someone you want to mess with.  He’s lost about as many arguments as he has basketball games.  His girls know he’s got their backs.

The gist of Auriemma’s perfectly calm retort to Shaughnessy came in two simple words.  Don’t watch.  Who needs 140 characters to express what one can get across so eloquently in ten?  Pretty smooth reply, I must admit.  After all, this isn’t Auriemma’s first publicized war of the words.  His back and forth banter with former University of Tennessee head coach Pat Summit was stuff of legend.  And he’s had plenty of run-ins with the media over the years although this might be the first with someone the status of Shaughnessy who has written for the Globe since they used typewriter ribbons and Wite-Out.

Shaughnessy has since recanted his Tweet in a follow-up article but it’s a little too late.  It’s okay.  Nobody outside of New England reads Shaughnessy anyway.  After the slew of angry responses that ensued, I’m guessing that Bushmills on the rocks on the way home from the Globe didn’t go down as smoothly as it normally does.

A few months ago, I went to see the record-settingly, dominant Golden State Warriors play basketball in Orlando.  After all, this is history in the making.  A few years ago, when Auriemma’s undefeated UConn team was en route to breaking UCLA’s record for most consecutive wins, they came to Tampa to play USF.  I saw them too.

Just because it’s women’s basketball and not a more mainstream sport doesn’t make it any less of an accomplishment.  And if UConn’s blowing people out, that just means they’re that good.  In one of numerous responses to Shaughnessy’s Tweet, NBA analyst for ESPN Doris Burke wrote “What Connecticut is doing is hard. Do they make it look easy? Yes. But this is hard. And we should appreciate sustained excellence. They’re coached hard.  I wish more women were exposed to his coaching because, you know what? As a player, I want to maximize my abilities. And that’s what Geno Auriemma does.” 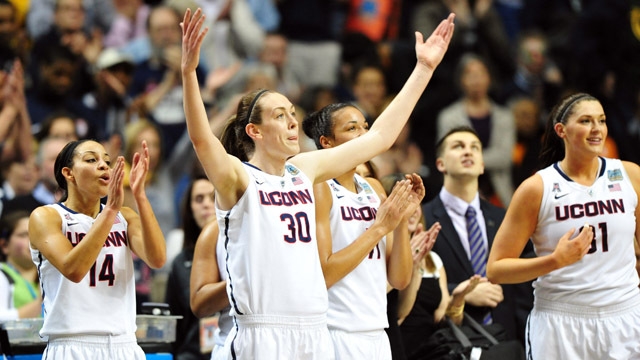 If the Warriors were doing what UConn is doing, if they seamlessly rattled off two or three more championships while barely losing a game, I can’t help but wonder whether Shaughnessy would think that would be bad for the NBA.  Or maybe, just maybe, we shouldn’t care what Shaughnessy has to think at all.