We might all be a little preoccupied with March Madness right now, but this year’s NBA draft is fast approaching with college players currently deciding if they wish to declare for the NBA.

The NBA draft is the perfect opportunity for young players to progress from a college team – where you match your maximum 20 hours a week training with academic work – to a full-time, very highly paid career in basketball. These picks can be exceptionally important for a player’s future career as the team that chooses a player will help hone and improve their abilities for the future. Indeed a good pick can end up playing for their first NBA team for much of their career.

Take Steph Curry who is considered the best player in the NBA right now or Kobe Bryant who has been voted second in the Greatest of All Time (GOAT) – both these players have stayed with their first NBA team throughout their career. Curry himself was chosen as a 7th draft pick in 2009 by the Golden State Warriors, which was perhaps the greatest pick the team has ever made.

So with the potential of some future legends up for draft, who will be this year’s top 10 draft picks for the NBA? Here are our top 10 picks. 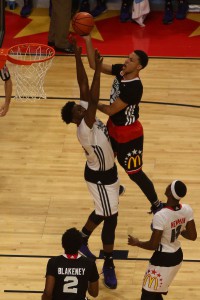 The 19 year-old Australian made headlines when he announced his intention to declare for the NBA draft. After-all, this is the only player this season to average more than 19 points, four assists and 11 rebounds. Particularly prized for his amazing ball-handling, passing, all-court vision and instincts, it’s highly likely that Simmons will be this year’s top pick for the NBA draft.

The Duke forward is another player hotly contended to take the top spot at this year’s draft. At 6-foot-9 and 195lbs, Ingram has an impressive wingspan of over 7-foot and can play various positions on the floor making him a versatile choice for any NBA team.

Jaylen Brown hasn’t officially announced an intention to join the NBA draft yet – he has until 25 May to decide – but if the 19 year-old does declare he’ll be one of the top picks. At 6-foot-7 and 225lbs, Brown is certainly built to be an athlete, but what makes Brown such a good pick is his maturity. The fact that Brown is much more mature than other players his age will make him a key target. 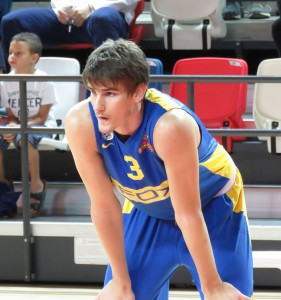 Bender made his pro debut at just 15 in the Croatian league playing for KK Split, now 18, the impressive 7-foot-1 European is looking to make the plunge into the NBA. Playing as a small/power forward, Bender spent last year playing in the Israeli second division where both his bulk and game are improving by the day. He is also incredibly nimble for his size.

Dunn was a leading potential lottery pick for last year’s NBA draft, however the 22 year-old opted to return for another year of school instead. Declaring for this year, the point guard has been improving steadily over the years and although plagued by injury a couple of years ago, teams are unlikely to be put-off by this.

Some people claim that Buddy Hield is the best college shooter since Steph Curry, which is unsurprising considering his scoring record last season. The 22 year-old, who stands 6-foot-4 and weighs 215lbs, has made vast improvements in the last few seasons. Pair that with his goal average and many NBA teams will be intrigued to see if this college student has the potential to be a future legend.

Murray is another intelligent player on the floor who has a superb ability to create plays and score in a variety of ways on the court. Averaging 7.7 3-point attempts per game last year for Kentucky, the Canadian is certainly a prime candidate for the NBA. Although he can be slow at times so he’ll need to work on his athleticism.

Austrian Jacob Poeltl was a top pick for last year’s NBA draft, but opted to play one more year in college in order to raise his Draft stock – a choice that appears to have been very successful for the 20 year-old. Although Poeltlstill needs to bulk up slightly, any NBA team that takes him on will be able to use him straight away so he’s best suited to a team looking for someone to offer minutes to. 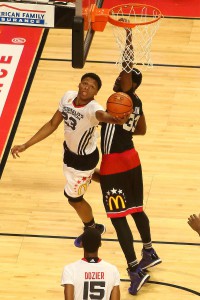 Like his teammate Jaylen Brown, Ivan Rabb is another player who needs to decide if he’s going to declare for this year’s draft. The 19 year-old power forward has the advantage of a slight frame making gaining position against defenders easier for him than others. With more training and weights, Rabb will be a great player for the NBA in the future.

Dejounte Murray is a player with lots of potential and flair. Indeed, the shooting guard managed 15.6points and 4.4 assists per game making him a great sign, however he still has a few weaknesses to iron out. In fact, Murray may be better suited to another year at Washington – if he does and improves those weaknesses and bulks out a bit then he’ll likely be in next year’s top 5 picks.