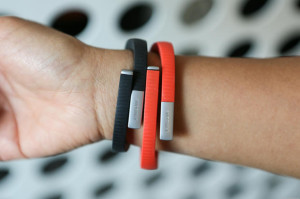 Fitbit, or Jawbone which is the particular brand I use, is a fancy, newfangled piece of technology that one puts around one’s wrist with the intent of tracking exactly, give or take, how much one exercises.  Overall activity is broken down into one, simple unit of measurement: steps, which determines how much energy one exerts in a day.  These wristbands also track heart rate, calories consumed (if you type what you’ve eaten into your phone) and quality of sleep.

You can also challenge anyone wearing the same brand wristband as you to “duels” of varying length, meaning you can not only obsess about how many steps you’re getting a day but also obsess about how much exercise your thousand, closest Facebook friends are getting.

As I’m pretty active, I like to throw around a challenge here and there.  Undefeated to date, I’ll challenge anyone I know who is in my Fitbit posse, knowing that as I work on my feet and log about 85,000 “steps” a week,  I’m a tough out.

Dr. Laura is a dear friend, a bar denizen and a karaoke criminologist.  She also wears a Fitbit.

On a whim, we challenged each other to a week-long duel to the death to see which one of us could amass the most steps over seven days.  I figured there was no way little Dr. Laura could possibly compete with the SportsChump, whose active and occasionally spastic behavior people read about for miles around.

Our battle began last Wednesday, smack dab at the beginning of my two days of rest.  Dr. Laura took an early, commanding lead.  It was bad timing on my part to challenge the good doctor who happened to be out of town attending some conference that clearly required its participants to walk a thousand miles before every lecture.

Her early lead looked insurmountable.  I needed to get my ass in gear.

Friday meant it was back to work, ten hours a day on my feet, broken up by intermittent and challenging – by my own definition of challenging – gym workouts.  Heck, I even wore my wonder band on the beach for Mother’s Day just to track how many steps I could get in the sand.  The tan line on my wrist is a testament of my will to obsess. 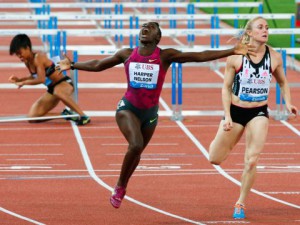 Victory would eventually be mine.  Or would it?

Our duel came down to the final day.  After a combined 160,000 steps between the two of us, I trailed Doctor L by only 3,000 steps with an afternoon to go.

So where does any good, red-blooded American go to walk aimlessly for miles upon miles?

I went to the mall.  In and out, from store to store, I would not stop walking until the proverbial buzzer sounded.

The only problem was Dr. Laura’s odometer kept spinning as well.  What the hell mall was she in? 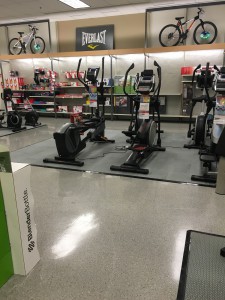 I couldn’t stop at any sales counters; I needed to keep moving.  Waiting in line would only decrease my step count.  Seeing something I liked would have to wait.  I passed through JC Penney and Macys and Foot Lockers.  The techno music that played rather inappropriately in each of the stores became the soundtrack to my life.  Left, right, left, right, aunce, aunce, aunce.  I had half a mind to hop on the Stepmaster at Sears for an extra boost.  Sir, you’re going to have to get off that machine now.  It’s been thirty minutes.

I even hesitated before getting onto an escalator, realizing it wouldn’t give me steps I needed.  Where’s a damn stairwell when I need one?  I hurdled escalator steps two at a time mean-mugging people if the blocked my path.  If only mean-mugging counted for extra steps.

What’s funny is that you think I’m exaggerating.

I became unhealthily obsessed with my health so much so that my phone ran low on battery life, the result of me looking too often to see how much ground I had gained on my opponent.  Not only was my phone about to die but my Fitbit hadn’t been charged lately.  Was it tracking all my steps?  Running on empty, running on…

As I traversed the mall (for the eighth time), I checked my app again. No gain.  Dr. Laura must have brought her treadmill to the office.  (Note: she later confessed to having leg cramps the next day.)  While I was doing my best to gain ground, her step count continued to climb.  This would be a race to the finish.

Store keepers must have wondered why I passed them by three, four, five times.  Sorry, Isreali sea salt guy. Can’t stop to talk.  Gotta keep movin’.  And no I don’t want your free samples anyway.

I checked my status feverishly.  With minutes left, I took a small lead!  For a brief second, I almost felt bad about it.  But wait, her Fitbit hadn’t synced.

Flailing my arms with the hopes it would give me extra steps, I walked on… and on.  Fortunately, mall security was not called.  And if you don’t think I’m obsessive enough, when I say I walked around the mall, I literally walked around the entire mall, going outside and circumnavigating the parking lot, hoping the sunshine would in some way raise my heart rate to give me the lead once and for all in our walk-a-thon of the ages.

The final minutes ticked down and in the end…  I lost, to a girl.

I felt like Judge Reinhold in Seinfeld’s spoof of Schindler’s List.  If only I had done more.  One last push-up, one last step.

With blistered feet, I bowed graciously in defeat.

So, to those of you out there wearing a Jawbone of your own, feel free to throw me a challenge.  I may finish in second place but I’m going to give it all I got.  Just ask Dr. Laura… as soon as she’s released from intensive care.

10 thoughts on “Step by step, rung by rung: A FitBit challenge for the ages”