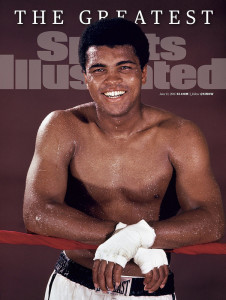 This won’t be the first Muhammad Ali tribute you read and it shouldn’t be.  But it’s going to be mine so please allow me a moment to share my own, personal memories of the man who will forever be known as “The Greatest.”

If you’ve been reading this website for any length of time, you know I’m all over the board with my sports allegiances, my likes and dislikes.  If it’s in anyway competitive, count me in.  Oddly enough, however, my father really only liked two sports: tennis and boxing.  Sure, there were baseball games on the tube but basketball and football were rarely watched.  Tennis and boxing were his true loves.

My father, a self-made man and ridiculously hard worker to this very day, didn’t idolize many people but Muhammad Ali was beyond reproach.  He was the man.  Nobody was a close second which in retrospect was odd considering my dad was conservative and Ali was anything but.

My first memory of watching Ali fight came when I was nine years old.  I don’t remember where we watched this particular bout.  For some reason, I want to say we were in a hotel room somewhere, perhaps vacationing.  Dad was glued to the television set. 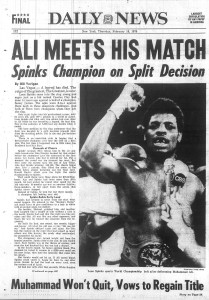 Ali (36) was considerably older than his opponent that evening, Leon Spinks (24).  Spinks was an 8-to-1 underdog.

Ali lost that fight.  I vaguely remember my father explaining to me what a split decision was.  My dad sat at the edge of the bed hoping the judges would rule the fight in Ali’s favor.  They didn’t.  I remember how devastated my father was.  It was the first time in my life I understood how the outcome of a sporting event could eat at your soul.  Ali had lost before but this fight more than anything signified the end of his dominance, if not his career.

Ali would fight Spinks again later that year and beat him.  That would be his last ever victory.

I think my dad had actually seen Ali fight in person at Madison Square Garden earlier in his career.  I remember he had the programs in his armoire that I would thumb through as a child.

I was nine.  I didn’t understand black or white, Vietnam or the Nation of Islam.  I didn’t know who Cassius Clay was.  I just knew that this guy who my father revered was, for lack of a better adjective, the greatest.  If he could earn my dad’s love, he must be something special.  In Ali, I think my father found a little of himself, the brashness, the egoism, the unrelenting desire to be unbeatable.  I’m sure he wasn’t the only one to do so.

Later in life, as I began to study sports and history, I found out so much more about Ali.  He took a stand in a far, more tumultuous time.  Growing up in an era of considerably less conflict and social strife, it’s hard for any of us to imagine an athlete having such a profound impact on the world around us.  What athlete do you know these days that would be stripped of their title standing up for something they believe? 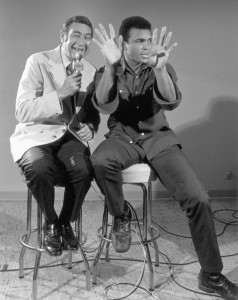 Ali was the taunter, the self-professed greatest of all-time, the ultimate sound-bite.  His back-and-forth banter with Howard Cosell blows away any silly and comparably irrelevant spats stars have on the internet these days.

It was a different time.  I could sit here and sound like a crotchety old fucker by saying things like “there will never be another Muhammad Ali.”  And I’d be right.  Heck, the sweet science barely exists anymore or at least nobody’s watching.  The sport carries a fraction of its once momentous influence.

Muhammad Ali passed away Friday night at the age of 74.  He lived a long full life providing us with immeasurable, cultural impact.  He was cunning.  He was controversial.  He was the champ.

Watching my father’s affinity for Ali inevitably shaped the sports fan I am today.  Through Ali and my father, I learned that delving wholeheartedly into sports could bring glorious highs and overwhelming lows but sports, more than anything, gave you something to believe in.

I no longer speak to my father and that’s a shame.  Years of bitterness and squabbles have soiled our relationship but that’s a conversation for another time.  I didn’t cry when I heard Ali had passed.  But I was moved by the memories it brought up.

My father and I may speak again, we might not.  But we will always have Muhammad Ali.

18 Replies to “My memories of Muhammad Ali”