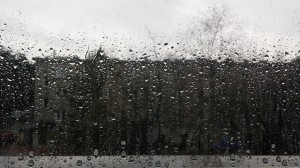 Last Sunday was different in America.

I woke up late to a thundering rainstorm.  That wasn’t what made it different.  Inclement weather is a daily occurrence here in the Florida summertime, raindrops falling quasi-symbolically to cool us from the unbearable heat.

No, something else that day was just… different.

As I walked around somewhat aimlessly in the rain, I couldn’t help but be affected by the news that shook us the night before, a tragedy that struck less than one hundred miles away from my very home, in my old home town, a place where people come from around the world to vacation and get away from it all.

A senseless act of violence had taken the lives of fifty people and injured fifty more, just like that.

It was a somber day for sure with details emerging all day long about a young and clearly confused man who failed to respect humanity decided take matters into his own hands.

In light of the news, it became difficult for even the most positive among us not to question what kind of world we live in and what exactly the fuck is going on. 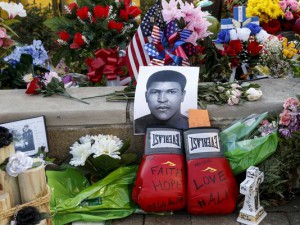 The day before, I had just watched countless, diverse religious leaders, stars and politicians speak uplifting messages of hope at the wake of Muhammad Ali.  All those words got lost in the shuffle just one day later.

It was hard to focus on hockey, basketball or any of the other things we talk about on this website.  They all felt wholly irrelevant.

I continued to walk around in the rain.  I gave money to a homeless man who graciously thanked me as he tried his best to stay dry.  He said he hated it out there.  I can’t say I blame him.

It was a very somber day.

Everyone used social media to spread messages of love and sorrow.  Candlelight vigils and blood drives were held across town, if not the country.

Later that night, I started watching Ken Burns’ documentary on Jackie Robinson to take my mind off things.  I couldn’t help but think about how far we’ve come since his time… and how far we haven’t.

In an election year, politicians jockeying for our favor blathered about the state of our nation and how to address terrorism both domestic and abroad, with very little progress.

As an idealist, it’s becoming harder not to be cynical.  As one who runs a website, it’s hard to write about matters I try to avoid discussing but sometimes, it’s hard not to.  Anything you put down on paper sounds simultaneously meaningful and trivial in the wake of what happened.

One of stepfather of SportsChump’s many careers included working as attorney for the ACLU.  He’s a good liberal like his stepson. 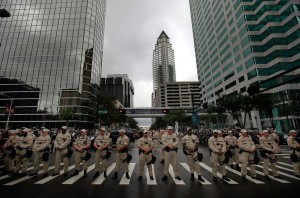 One of the issues that came under his watch was the proliferation of video cameras in public places.  The subject came about because the 2012 National Republican Convention was being held in Tampa.  Proponents of adding cameras felt they would deter the likelihood of incidents.  Opponents, like the ACLU, felt additional cameras were an invasion of privacy.

I’ve worked in places with video cameras and while at first I objected to them, I later rationalized that if I did nothing wrong, I had nothing to fear.

I can now see both points of view.  While I don’t want terrorism turning our country into a police state, it was video evidence that helped capture the Boston Marathon bombers.

In the end, I’m not sure how we stop all this nonsense.  Clearly an extra camera isn’t going to stop all the hatred.  Unfortunately. 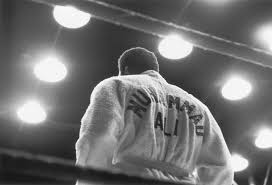 When we recall the late Muhammad Ali, we talk about how he fought, both inside and out of the ring, in a different era.  Back then, there was something to fight for and now there is not.  That’s becoming less and less true.  There might not be a Vietnam but there’s a far more dangerous enemy out there now and that enemy is intolerance.  The struggle, my friends, is real.

I’m not here to be preachy.  I’m not here to tell you how to vote, what to believe or where to store your gun.  I do, however, believe tolerance and understanding begin within oneself.

I’m a proud American and a lifelong idealist.  I maintain faith that peace and a shared respect for humanity is possible despite the upsetting actions that occur from time to time.  I celebrate the freedoms our nation’s heritage has bestowed upon us.  Even in heated debate between opposing sides, positive change can emerge.  Sight of that can never be lost.

I would not exchange the love I have in my heart for anything.  In the battle of love versus hate and good versus evil, I choose the good love every damn time.

Writing about this isn’t fun.  I’d much rather be writing about the games that don’t matter but since this site is as much about thought as it is about therapy, it would be an injustice to let this go without mention.

And so, we grieve not only the loss of those who passed but another chink in our collective freedom.

One day the rain will stop.  The sun will come out.  We must believe that and very often fight for it.  That’s going to take a collective effort.  Let’s see if we have it in us.