I watched a video the other day of Team USA Olympic warmups, our proud nation’s latest attempt to once again show the world who’s boss on the basketball court. 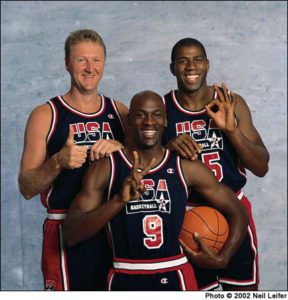 For basketball joneses like me, watching Team USA play hoops in international competition is like fielding your own fantasy team where you get the first twelve picks without anyone else choosing and then decimating the competition while sipping on a Big Gulp and reminding ourselves that our country is already great and doesn’t need to made great again.  The historic 1992 Olympic team set the barrier awfully high, putting together Michael Jordan, Magic Johnson and Larry Bird among others to embarrass the world en route to gold.  They were megastars.  That was the first time we had assembled professional players in the Olympics.  While some complained it was unfair, others said too fucking bad.  Here’s our best.  Good luck beating ‘em.

In 2016, the US is still putting together its best professionals to take on the competition.  Some of the league’s biggest names, i.e., LeBron James, Dwayne Wade and Steph Curry, opted out of these Olympics.  They’ve already garnered gold.  Well, Curry hasn’t but Wade and James both won Olympic gold in 2008 and James did again in 2012.

Carmelo Anthony was also on both those ’08 and ’12 teams.  He’s on it again in 2016 and make no mistake… this is Carmelo’s team.  At 32, he is the team’s elder statesman, which is good because those of us who have criticized Carmelo since he came into the league argue that he has failed to live up to the hype.  Now comes one mini-shot at redemption.

After winning a national championship at Syracuse as a freshman, Carmelo attained superstar status but has no other jewelry to show for it.  No Finals championships, no finals appearances and no MVPs.  He owns one scoring title, with the Knicks in 2012-13, but we all knew he could score.  Essentially, he is this generation’s Danny Manning.

Now that he’s at the back end of his career, the Knicks have finally paired him with some similarly aging talent, Derrick Rose and Joakim Noah.  But first, Carmelo must take on the world and as usual, anything short of gold for Team USA will be a disappointment.

Despite not having the aforementioned players, Team USA should still be standing atop the podium when it’s all said and done.  If they fall short, rest assured, Carmelo will shoulder some of the blame.

Personally, I’ve always been a Carmelo fan.  That’s because I’ve accepted him for what he is.  A scorer and that’s about it.  Dubbed the ball-stopper by many (because he doesn’t pass) this is his chance to show that he’s matured, that he can become a true leader, the chance to accept that he doesn’t need to be the leading scorer on this team, that someone else can handle the workload.  Michael Jordan wasn’t the leading scorer on the ’92 Olympic team.  Neither was Larry or Magic.  Charles Barkley was.

With DeMar Derozan, Jimmy Butler, Kyrie Irving, Paul George, Klay Thompson and the newest Warrior, Kevin Durant on this team, there will be plenty of scoring.  The ball stopping in Carmelo’s hands could lead to no gold.

This autumn, he’s going to lead a brand new Knicks team in what will be the beginning of the end of his NBA career.  But first, the Olympics in Rio. 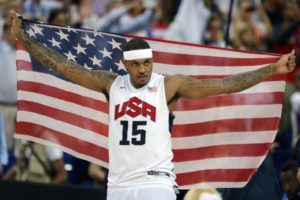 There’s more riding on these Olympics than you might think.  Carmelo understands that.  Winning or losing the gold won’t define his career.  Winning would give him a third Olympic gold which I’m not too sure too many NBA players have. It would also prove once again that he’s a winner, something that we haven’t seen from him in a long, long time.

Losing, well, losing is not an option.