I am a fashion plate and not only because I have a closet full of clothes and have seen Zoolander about 57 times.

On the contrary, I am a fashion plate because I wear what’s comfortable (and it generally matches), know how to work a sales rack, have plenty of fancy SportsChump t-shirts in my wardrobe… and because I’ve seen Zoolander about 57 times.

There were a few other athletes who made headlines for their fashion sense (or lack thereof) last week.  Let’s discuss their dos and don’ts, shall we?

Chris Sale has been suspended for five games by his baseball team, the Chicago White Sox.

When we last left Chris Sale, he was leading the major leagues with 14 wins and was fifth in the American League in strikeouts.  If he wasn’t a shoo-in to win this year’s A.L. Cy Young Award, he was most certainly a front-runner. 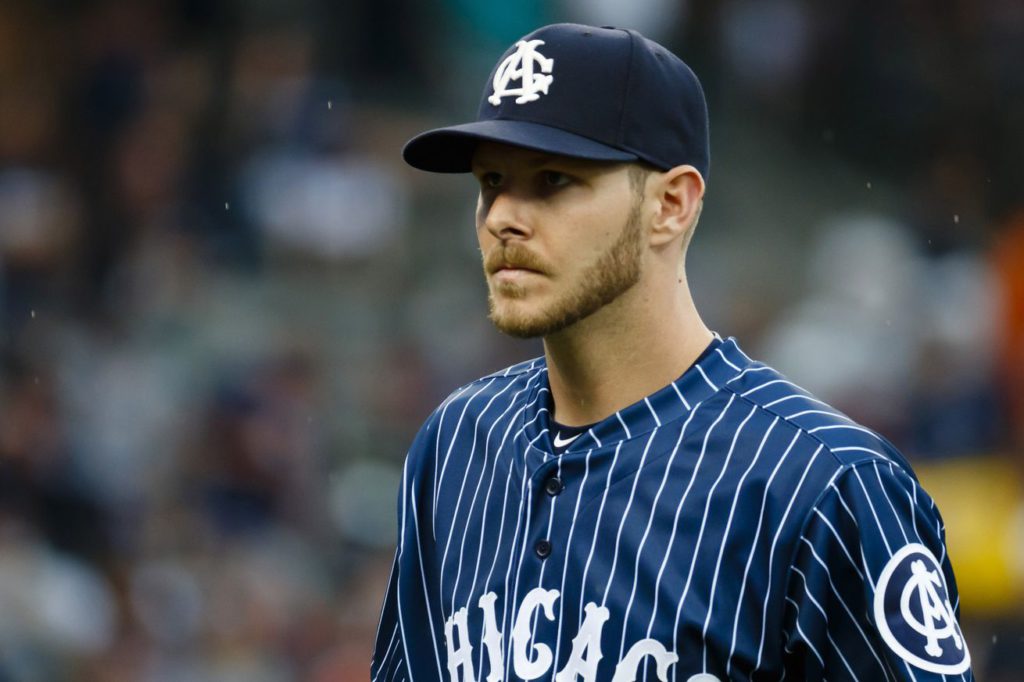 Those hopes of winning his first such title might have been torn to shreds last week, literally.

As most of us know, professional sports leagues celebrate their history by having what they like to call “throwback games.”  In these games, teams will wear uniforms that harken back to a time when they were made of far, less breathable cotton and when the athletes who wore them made considerably less money.  Throwback uniforms can present problems for teams, like the Tampa Bay Rays, who haven’t been around all that long, forcing ownership to come up with some sort of uniform they think the team would have worn back in the day but for the most part, throwback uniforms are trendy, nostalgic and provide marketing departments avenues to sell an entirely different jersey to their fan base.

Well, Chris Sale isn’t a fan of the throwback and he let the White Sox know it.  Feeling the V-neck and collars of their assigned throwbacks were uncomfortable, Sale had himself a little hissy fit and cut up not only his jersey but also all his teammates’ while they were unsuspectingly taking batting practice.  Have you ever walked into your apartment and found your dog has torn everything to shreds?  Picture that, only with Chris Sale playing the role of the dog that needs house training.  Allegedly, Sale took not a pair of scissors to these unis, mind you, but a knife.  Even Norman Bates thought that was a bit over the top.

Sale has yet to apologize publicly but it will likely come along with the organization trying to convince us he’s not mentally unstable.  Media members covering the press conference may not want to get too close or wear anything vintage just in case.

If these temper tantrums continue, Sale will no longer have to worry about tearing up his White Sox throwbacks.  He’ll be wearing another uniform, and that’s if he’s lucky.

My hair’s all Messi

After once again losing the Copa America to rival Chile, the 29-year old Lionel Messi immediately announced would no longer play for the national soccer team for his native Argentina.

And then he did something even more drastic. 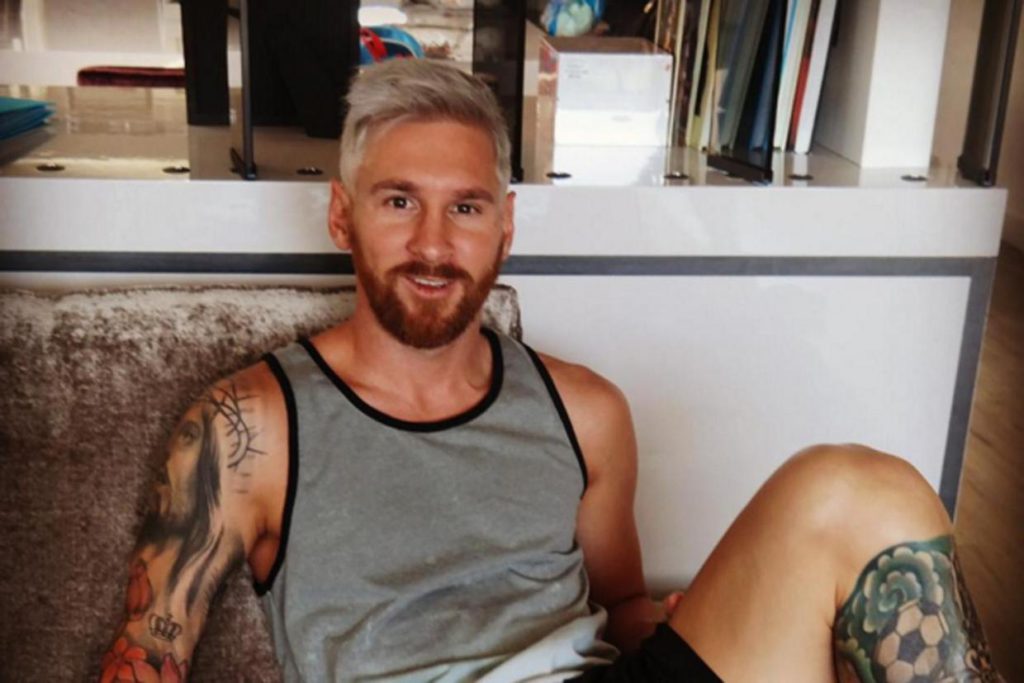 On Sunday, Messi’s significant other posted an Instagram photo of her new blonde boyfriend which received I’m not sure exactly how many likes… because I’m not on Instagram.  I’m guessing, however, there were more than a few, Paul Mitchell not being one of them.

Hair styles have long been a thing for soccer players.  Just look at Carlos Valderrama, David Beckham or Messi’s current nemesis outside of the Chilean national team, Ronaldo, all with perfectly recognizable hair.  This World Cup brought to you by pomade.

I’m not going to tell a multi-millionaire how to wear his hair especially considering I have less hair and make less money than them.  But remember when Jason Kidd went blonde?  I think we can all agree that was a mistake.

There comes a time in a man’s life when he should stop dying his hair and that’s assuming a man ever has a reason to dye his hair in the first place.

Or maybe Messi just changed his hair color so his fellow Argentinians wouldn’t recognize him.

A Star in Stripes

The kid with the captivating smile and the Splendid Splinter-like swing had his image bronzed in Cooperstown this weekend and you should have seen what he was wearing.  Fortunately, Ken Griffey, Jr. opted for far, more classy attire than the aforementioned Sale and Messi.  Nor did he need pinking shears or hair dye.

At first glance, Griffey’s pinstripe suit looked normal as he tearfully thanked his father at the podium but upon further review, those weren’t pinstripes at all but rather thin lines that read “Hall of Fame Class 2016.”  Expect that suit to be hanging in Cooperstown as well very soon. 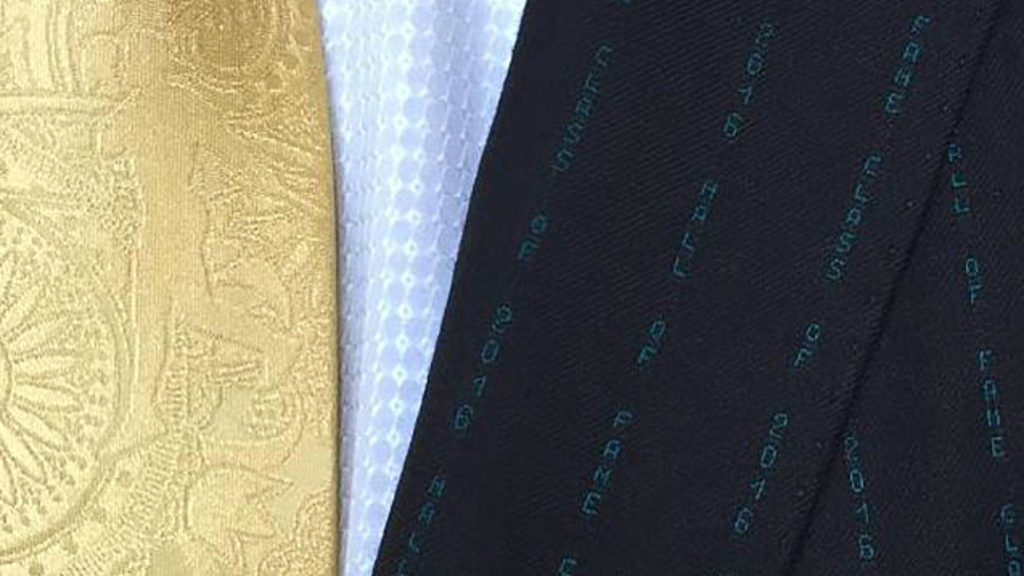 Ken Griffey, Jr. ended his 22-year career with 630 home runs and deserved to be a first ballot hall of famer.  In fact, occasional SportsChump contributor, J-Dub questioned the sanity of those who failed to make Griffey’s first ballot entry unanimous.  I’m not too sure where he stood on the suit.

I’ve learned my lesson not to criticize the kid.  The mere implication that Griffey Jr. might have taken steroids, considering the era he played in, prompted a Twitter battle that went on for weeks.

Either way, the kid with the smile and the swing, and now the “pinstriped” suit, are now in the Hall and rightfully so.

Smoochin’ on the Dock of the Bay

And finally, in the “It Pays to Be Short” department, New England Patriots wide receiver Julian Edelman was seen walking hand in hand this weekend with supermodel Adriana Lima.  Edelman is listed at 5’10” which means he’s actually 5’8 ½”. 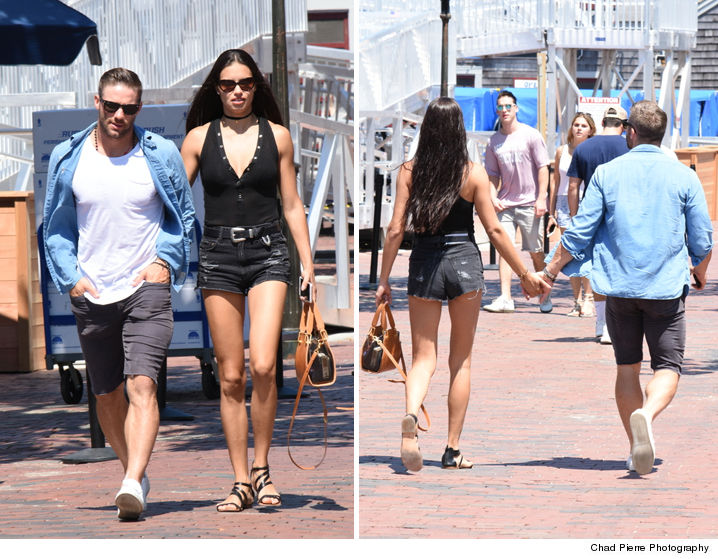 I’ve always said that if you’re that short and play in the NFL, you must be some special sort of crazy.  Well, now Edelman is a crazy dude with a smoking hot girlfriend.

See that, boys?  There’s hope for us yet.  Just make sure she wears her flats on the first date.

Now if you’ll excuse me, I have some shopping to attend to.