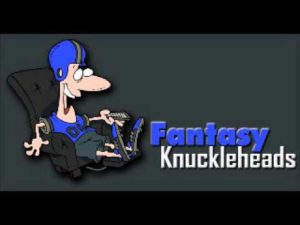 At SportsChump, we are here to help.

As writer and creator of this award-winning and voraciously entertaining website, we strive to make you think, chuckle and perhaps even make a buck or two in the process.  Who in their right mind doesn’t like to do those three things?  I mean, if you’re going to invest your time and hard-earned money playing fantasy football this year, why not do all you can to secure the best possible return on your investment?

That’s why we invited Kurt Turner here today to talk a little fantasy football.  Mr. Turner is one of the brain children behind Fantasy Knuckleheads, a fantasy football and otherwise-related sports forum within which I’ve been known to loiter on occasion.

Before we get started, Kurt, tell my readers a little about yourself and why in the world they should listen to what you have to say about fantasy football.

Kurt Turner: Chump, thanks for letting me loiter about and for putting this piece together. The exploits of Fantasy Knuckleheads have placed our brand (and writers) on panels at draft parties alongside experts from Rotowire and CBS Sports. I’ve been a guest on a number of Sirius XM radio shows and have been known to show up on milk cartoons as a child. When I was 10 years old my abductor made me monitor the weather and injury reports for his fantasy team. Sitting in a small cage with only a laptop and excrement, I brought his team fantasy greatness. Ever since then I’ve enjoyed the game, living vicariously through the players and their stats I guess.

You wouldn’t believe the amount of paperwork I used to have thrown about the kitchen table just to draft my fantasy football team. Behind a locked door on draft day you would find: me, beer, 2 or 3 fantasy football magazines, 6 cheat sheets with rankings and projections, another 6 with ADP, some more with strength of schedule, one with sleepers on it, a sheet with bye week information, depth charts for each team and a partridge in a pear tree. As we all know it is way too hard to analyze all the possible data points before and during the draft, it’s just too much information and not enough time. So I began my quest for the ultimate cheat sheet, one with all the right data points to help me make the right choices during the draft. Obviously such a unicorn didn’t exist, until I created Fantasy Knuckleheads.

SC: So tell us, what you can, about the Cheat Sheet and more particularly, your success using it.  How long ago did you find success in it?  Do you tinker with it each year or do you think you’ve got the format pretty much down pat?  How much time does it take you to actually compile this mountain of information each season and when do you start compiling it?

KT: I think around 2007 I started stuffing all the data points into one cheat sheet for my personal use. This used to be a painstaking manual process (maybe 10 hours or more spread out over a couple days) but it made my draft much easier. Consolidating this information into one sheet just makes the “in draft” research much easier which translates into better picks when you’re on the clock. 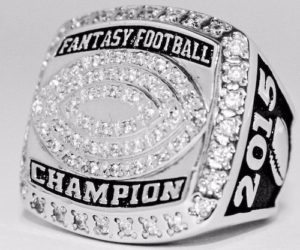 I’ve always been pretty good at playing fantasy football so I wouldn’t say the cheat sheet defined my winning or losing, just made the draft a lot easier. As far as tinkering with the data, the stuff you need to know during the draft is pretty straight forward and doesn’t change from year to year. What does change is the projections process.

Projections are the magic sauce for any fantasy football website. He who holds the most accurate projections wins so this is where I spend most of my time, tweaking projections so our members can easily identify undervalued players while drafting. This really helps people in the mid to late rounds when they’re looking at a list of names they pretty much know nothing about. I start gathering information for our draft guide after the Super Bowl while all the player information is fresh in my mind. I’ll jot down players that ended the season on a hot streak and players that seemed to fade, for example. Once the schedule comes out I’ll run the numbers for strength of schedule. Once people start drafting I’ll start pulling down average draft position numbers. Preparation for the upcoming season starts as soon as the regular season ends, so basically I have no off-season.

SC: So let me ask you this without you giving away too many of your trade secrets (and by the way, feel free to tell my readers how and where they can purchase said Knucklehead knowledge if they’re so inclined).   Last year I went into my draft thinking running back, running back, running back.  I even passed on the opportunity to draft Rob Gronkowski in the first round and later regretted it (sort of, I went with Matt Forte instead).  Is loading up on running backs not the safest bet or is the more proper approach to go with the player who you forecast will get you the most points on every given Sunday.

KT: I covered the early round WR vs RB debate on my website for you to chew on. Bottom line, look at wide receiver and you’ll find more consistency, reliability, and higher point production over running backs of similar ADP. Not what we’ve been programmed to think since birth, but it’s obviously a passing league now more than ever. You’ll still need solid production out of two running backs and that can be had for pretty cheap in rounds 3, 4 and 5. During the season you need to use the waiver wire to shore up your RB depth. I can’t tell you how many starting running backs I’ve snagged over the years in-between weeks 1 and 5. Sign up for our cheat sheets and in-season support and I’ll send you waiver wire targets on Sunday and Monday, this gives you a leg up for sure. Thank you all for your time and consideration. You can always hit me up in our forum or on twitter.

SC: And there you have it, folks.  Off he goes in a blur.  I hope that was of some help.  If you are in anyway interested in finding out more, click on the above hyperlinks.  I may just have to pick up a copy myself.  Lord knows I’m going to need all the help I can get.