By J-Dub and SportsChump

Let’s just cut to the race here. Somehow, the following Tweet was deemed “racist” by the PC police. 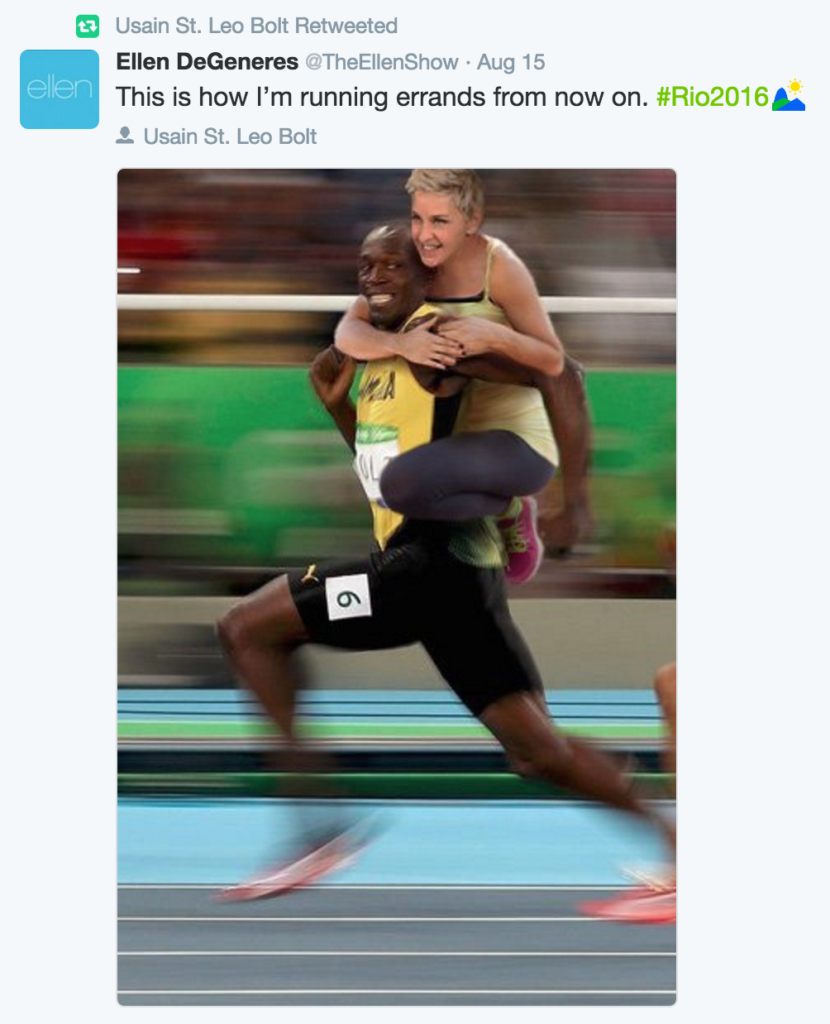 Think what you will about this, but don’t surprised that both J-Dub and SportsChump have some Olympic-sized opinions on this matter. So, before we get accused of “false-starting” on this matter… 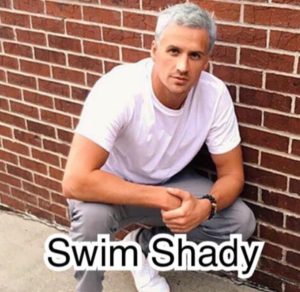 There’s nothing like an Olympic Games held in a Third World country to bring our global inequalities to the forefront.  I’ve lived in South America and have been to Rio so there was no news that could emerge from these Games that would surprise me in any way.  Olympians mugged at gunpoint?  Shocker!  Lochte detained at airport because some armed guard looked at his passport funny?  It’s happened to the best of us, Lochte.  Your dyed green hair was a dead giveaway you’re not a local.  Nothing screams out of touch with reality more than Carmelo Anthony having his image painted on a favela wall while telling kids to “Stay Melo”.  It’s bad enough these kids grow up in poverty, now they’ll never know what a pass is.

The Olympics used to (and sometimes still do) serve as the ultimate reminder that sport can cure the world’s political tensions, or at least distract us from them for three weeks at a time.  It introduces us to entirely new cultures and sporting events we never knew existed.  For example, did you know they played wet field hockey at Boise State?

Sometimes, however, the Games have the opposite effect, highlighting the differences between the haves and the have nots.  While the average Olympic athlete, who has practiced his or her craft for a lifetime, sleeps uncomfortably in the Olympic village shanty town, the billionaire boy’s club basketball team has a luxury cruise liner they only disembark for the occasional “spa” visit and to beat France and Serbia by three. 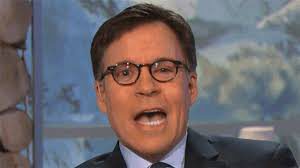 And then there’s the commentary.  Fortunately this year we were saved the inconvenience of staring at Bob Costas’ raging impetigo but another familiar face got in trouble for saying something mistook for being racist.

For those of you unfamiliar with the latest celebrity faux pas, here’s what happened.  After Jamaican sprinter Usain Bolt rattled off a few more gold medals in track and field, comedienne and talk show host Ellen DeGeneres Tweeted out a picture of her riding Usain Bolt’s back and stating that that was now how she was going to run her errands, which was a) not funny and b) not racist.  If she really wanted to make us laugh, she should have super-imposed her picture onto Team USA Basketball and Tweeted that this is now how she was going to underachieve.

Anyone familiar with Degeneres’s material over the years knows she’s (probably) not racist.  After all, she’s a minority herself and was one of the first, if not the first, Hollywood star to “come out” on a sitcom that bore her name.  Of course, that in and of itself, doesn’t make her not racist but I’m pretty sure her Bolt blunder was an attempt at comedy that immediately became misconstrued by our PCUSA as Driving Miss Daisy-like poor taste.

First of all, if Donald Trump were to win and establish an office responsible for the killing of political correctness, in the words of Lyndon Baines Johnson…I would not seek, nor would I accept such a nomination. There’s a lot of reasons for that, but the biggest one is that being the killer of political correctness in a President Trump world would be like being the Avalanche Alert Captain in Miami.  The issue is what once started as a legitimate attempt to end honest-to-goodness assholery has over time pole-vaulted across the line into complete idiocy.  The “Pied-Piped” Trump-ettes can see that, and they are going to vote accordingly.

In other words, “political correctness” is dying anyway, and this manufactured horseshit about Ellen DeGeneres being a racist is EXACTLY why.  Forget about the “Trump-ettes;” even quasi-liberals like the Chump got their noses out of Hilary’s pee-leak pad long enough to see that.

Let’s face it, Chump nails this shut when he says DeGeneres Tweet was “a) not funny and b) not racist.”  That’s exactly what it was; that’s what her whole fucking career has been.

I’ve been a student of comedy since my childhood; I’ve been writing comedy for nearly 30 years, and I’ve even done some stand-up in my past.  I remember when every little Shitburg in America had a “comedy club,” which was usually a converted Pizza Hut on the edge of town.  This was before HA! and The Comedy Channel merged into Comedy Central, and that was when Ellen DeGeneres first hit the stage.

She’s been selling the same wares for the better part of three decades, and more power to her.  Being painted as the poster-child for the anti-PC crowd, you would think I would have a problem with her sexuality…and you would be wrong. I don’t give a shit about anybody’s sexuality, with the sole exception of mine and Mrs. J-Dub.  We all know Ellen “came out” on her sit-com back in the day, but lesbian or not, Ellen is more “flavor-less” than a Velveeta sandwich on Wonder bread with extra mayonnaise. In other words, she’s built her whole fucking career on being unoffensive, and did it while being judged by the biggest crowd of sensitivity “canaries in the coal mine” outside of college campuses – the suburban American housewife.

Think about it. These aren’t the people who invented political correctness, but they brought it from the college campus and took it to the suburbs where they produced those screaming little second-generation PC monsters our universities are now choked with. Those “soccer-moms” are also the ones keeping Ellen’s not-funny talk show in production.

The proof is in the make-up counter. If you are a married guy, there are times you find yourself in those section of “Sprawl-Mart” where men just never go.  For years, cosmetic companies hawked their product on the faces of women who they thought housewives would think their husbands wanted to fuck.  That all changed when you started seeing Ellen’s face in the cosmetic aisle.

Don’t forget, she got there being the EXACT same Ellen she’s always been…not funny and not racist.  “Not funny” is the best way to remain “unoffensive,” because as we plainly see here, in today’s PC world, there are scads of people willing to create an offense where none exists. Ellen didn’t rise to meet the level of sensitivity; it sunk to her.

As for the “racist” part, I know for a fact she isn’t a racist…because I AM one and I never see her at the meetings.  They are going to drill holes in my teeth and make me chew aluminum foil for revealing this, but there’s a secret society in this country dedicated to all things not politically-correct.  As a member of the American Segregation, Sophistry, Hatred, Oligarchy, and Legislative Exclusion Society (A.S.S.H.O.L.E.S.), I can tell you Ellen DeGeneres is not a part of this organization…and we’ve reached out to her in the past.

I’m going to break one of my usual dictums in order to give you my bona fides as an A.S.S.H.O.L.E.  I usually don’t reveal my true persona in these posts, but here’s a rare photo of Mrs. J-Dub and me at our home in Queens. 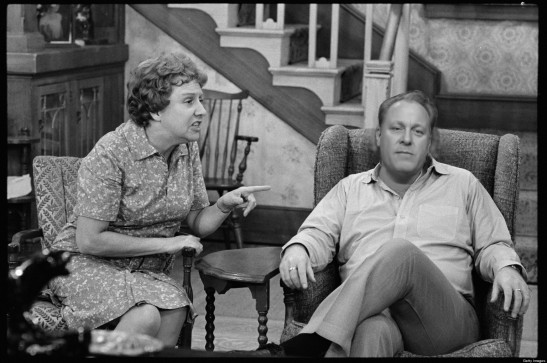 The ugly reality here is it isn’t Ellen’s fan base leveling these accusations at her, and those same Ellen fans (don’t you fucking dare call them “DeGenerates”) aren’t going to turn on her because even non-A.S.S.H.O.L.E.S. are catching on to what a supertanker-load of liquid natural horseshit the “race card” has become.

That point brings us to the real cause of death of political correctness.  Down south, there’s an old saying “the rattlesnakes are committing suicide,” which simply means a group of people who were long-aligned are beginning to turn on each other. The soccer moms and the vast majority of white people in this country are hitting the “international enough line” on being called racists every time somebody in this country is “offended.” They can see a not-funny joke is not tantamount to virulent racism much like they can see the folly in labeling it as such.  Making a joke about riding Usain Bolt makes Ellen DeGeneres as much of a racist as Usain Bolt riding Ellen would make him a lesbian.

Commonalities like that are how we unify as a people and end this kind of crap.  Together, Bolt and DeGeneres have probably eaten more pussy than that whole “wet field hockey team” the Chump is fascinated by, and isn’t coming together what the Olympics are all about?

7 thoughts on “Ellen DeGeneres ruins the Olympic Games and other racist tales of woe: A SportsChump-Dubsism Production”