“To every action there is always opposed an equal reaction” 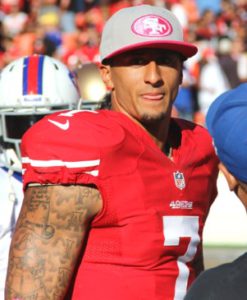 Sir Isaac Newton probably didn’t have Colin Kaepernick in mind when he discovered his third law of physics but damn if he wasn’t right on the money.  For if anything, the 49ers quarterback’s actions have generated one shit storm of an opposed reaction.

Far too many people have demanded to hear my take on Colin Kaepernick… so allow me to get all scientific for this one.

When business owners implement a new policy in the workplace, they do so to achieve a desired result.  Their plan will either succeed or fail based on the effectiveness of this new policy.  Similarly, when a man approaches a woman in a bar, he does so with specific intent.  How he goes about his business will determine whether or not he achieves the desired result, either a trip to her bedroom or a cocktail thrown in his face.

That’s ultimately the test of anything, isn’t it?  Did your actions achieve the desired reaction?

Colin Kaepernick’s recent refusal to stand during the national anthem got reaction, alright.  His manner of doing so ruffled America’s feathers, from fans and fellow footballers to policemen and presidential candidates.  Kap’s fifteen minutes of fame are in full effect.

As my good friend, J-Dub, accurately points out, Kap’s sit-down tore us into two camps, those who respect his right to take such a stand and those who think he’s a jerkoff for doing so.

Let’s just say I see and respect both sides of the argument but believe there’s a far more important question that should be asked, thanks to my pal, Isaac Newton.

What good, if any, came from all this?  And if no good comes from all this, perhaps we are all equally to blame.

We blast athletes for not taking a stand and when they do, in whichever form they ultimately choose, we criticize them for doing so.  People felt it was out of place for Carmelo Anthony, Dwyane Wade, LeBron James and Chris Paul to speak out at the ESPYs and when Michael Jordan recently spoke out against violence in this country, we criticized him for not doing so sooner.

We are rarely satisfied. 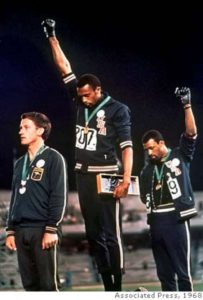 We have a tendency to look at things with our revisionist history knobs turned to eleven.  We laud former athletes like John Carlos, Tommie Smith, Muhammad Ali, Jim Brown, Kareem Abdul-Jabbar and Bill Russell as cultural heroes for taking a stand in a far more troublesome and oppressive time.  All other efforts pale in comparison.

This isn’t Rosa Parks refusing to give up her seat on the bus.  This isn’t four gentlemen staging a sit-in at a Woolworth lunch counter.  Nor is this Marvin Gaye writing “What’s Going On.”  This is a guy that yesterday nobody gave a shit about refusing to stand for our national anthem and promoting a cause we can only assume he believes in.

Please allow me to set aside the theory that Kap’s display was self-serving.  For the sake of this argument, it’s irrelevant.

It’s not a matter of whether Kap is right or wrong which is what a lot of the current and rather destructive dialogue is focused on.  He is allowed to do what he’s doing as long as he understands that he lives in a country that allows us to call him a putz for doing so.  Donald Trump and I don’t agree on much but when asked about the matter, Trump retorted that Kap “should find a country that works better for him.”  The only problem is there’s no other country willing to pay him $114 million a year to be a shitty quarterback.

No, instead we are all in an uproar about one guy who in the grand scheme of things is irrelevant unless… his actions generate constructive dialogue, which of course, won’t happen.  After all, this is America, home of saturated fat, Splenda and reality TV.

So who is really more at fault in this situation and where do we go from here?  I commend Americans for being offended but now what?  Are we going to continue to bicker about this or shall we allow for his actions to open healthy dialogue?  Fuck giving him credit for it when we’re the ones doing all the work.  Are we too busy bitching about him to realize that his actions don’t matter unless they promoted positive change?

Personally, I don’t give a shit.  He did what he did and I have far more important things to worry about.  We all do.

It matters not if his intent was genuine.  It matters far more how we proceed.  To every action there is an equal and opposite reaction.

The answer in my eyes is pretty simple.  Just stop hating each other and everything will work itself out.  We all know the difference between right and wrong.  It’s about time we started acting like it.