What a wild weekend it was.  After a hot, first week picking college football games with Zen-like precision, my Week One NFL wagers were horribly ill-advised.  Were it not for a few lucky college parlays, I’d currently be standing on an Ybor City street corner holding up a cardboard sign that reads “Will Gamble 4 Food.”

I entered three eliminator pools this year.  In one, I took Kansas City, who had all but lost until they came back from 21 down to win in overtime.  In another eliminator, I took the Seahawks, who came back in the final minute to (barely) beat Miami at home.  And in the final eliminator pool, I had Arizona over a depleted New England team, which will teach me to never again doubt Bill Belichick.  What’s more amazing is that I hadn’t learned that lesson already. 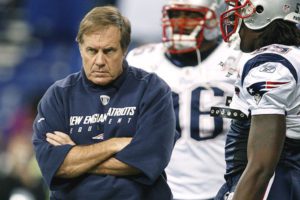 Without his Hall of Fame quarterback, star tight end and three offensive linemen, Coach Belichick designed a game plan to shut down one the NFC’s best teams in their own stadium.  His game plan was executed to perfection.  Carson Palmer no happy.  Neither is the Cardinals’ GM who called that loss “unacceptable.”  There was probably an F-bomb or two dropped in there for good measure.

Speaking of ornery coaches who don’t say much but are a constant source of entertainment, Nick Saban got his money’s worth this weekend.  Unhappy with the play-calling of his well-travelled, offensive coordinator, Lane Kiffin, he of the recent $700,000 raise, Saban became as red as the crimson tide while laying into him on the sidelines.  When asked about it post-game, Saban called it an “ass-chewing”  What remained of Kiffin’s ass was not available for comment.

You know how they ask that age old hypothetical question, if you could sit down to dinner with three people, who would they be?  On a whim, I might go with Belichick, Saban and Gregg Popovich.  Maybe I’d throw Coach K in there for good measure.  I know not a word would be said, until you got a few pops into these guys.  Then you know the dirty jokes and behind-the-scenes stories would be flying more furiously then Steve Spurrier’s visor.  Just imagine the wealth of knowledge you’d take home from that dinner, as long as you didn’t have to foot the bill.

Still speaking of ornery, there had to be about a hundred million people upset this weekend once they found out they couldn’t access ESPN’s fantasy football app.  Power to the people, y’all, we crashed the system!  I was one of those frustrated, fantasy geeks laid up on my couch, bitching that I couldn’t access up-to-date information about a team that doesn’t actually exist.  #firstworldproblems

Speaking of things that don’t work, RGIII is like that toy you buy from the toy store that you’re all excited to play with until you get it home, take it out of the box and it breaks instantly.  Injured already?  The guy just unpacked his bags.  Shame on Cleveland for not reading the fine print but then again, it’s not like they’ve had quarterback success in the last twenty years so this was par for the course.  Look for Josh McCown to start in Week Two. 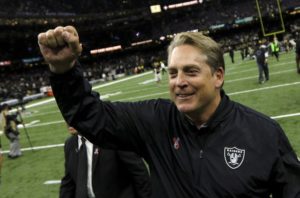 In the big brass balls category, how about what Coach Jack Del Rio did on Sunday, opting to go for two, and the win, in New Orleans after Drew Brees had yet another Drew Brees-like day: big numbers in a loss.  Del Rio even cracked on the four-letter after the game.  After ESPN Stats & Info Tweeted a remark questioning Del Rio’s risky business, Del Rio immediately replied “Good thing ESPN isn’t coaching the Raiders.”  ZING!  Nick Saban would have been proud… if only he knew what Twitter was.

And finally, we saw a glimpse into the NFL’s future this weekend as Ezekiel Elliott, Dak Prescott and Carson Wentz all started for the first time… and fared pretty well.  Wentz led his team to victory and in the absence of Tony Romo, Prescott stepped his game up and almost beat the New York Giants.  The way the Rams performed on Monday night, look for rookie quarterback Jared Goff to make his first appearance sooner rather than later.

Stay tuned for Week Two lines and our $100 giveaway contest which should be coming to you directly.