“You say you want a revolution.  Well, you know.  We all want to change the world.”

My mom tells the story of the night she did NOT go to see the Beatles at Shea Stadium.  It was 1966.  I was not yet a twinkle in her eye.

Her Beatles miss is eerily reminiscent of my Stevie Ray Vaughan rule which refers to the night I opted out of seeing Stevie Ray play only to have him die in a helicopter crash three months later.  As we’ve discussed, if you have the chance to see an artist perform, err on the side of caution and go see the fucking concert. 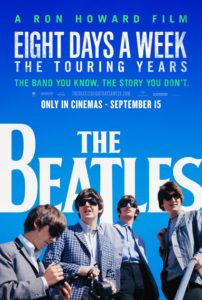 As it turns out, Mom missed a concert that changed the course of music history.  Thanks to Ron Howard, mom finally got to see that show up close and personal.  Howard has released a new documentary on the Beatles entitled “Eight Days A Week: The Touring Years.”  It is currently playing in select theaters around the country.

In his latest project, Howard focuses on the band as it toured in its early years, culminating with that ’66 tour.  He compiles never before seen footage and photos of the Fab Four as they grew into the greatest rock and roll band of all-time.  Note: more on that later.

The gist of Howard’s film, aside from bringing the audience back in time, is that the grind of touring wore on the Beatles to the point that they simply… stopped.  That 1966 tour was their last.  They recorded five albums after that but would never tour again.  The only good to come out of their decision to stop playing in front of screaming hordes was that it helped them reinvent themselves with Sgt. Pepper’s Lonely Hearts Club Band.  The Beatles sounded incredible live (even more so on film thanks to a little audio work from Howard) but at heart, they were a studio band.

Now, let’s get back to that whole “best band ever” argument.  For those of who you scoff at the idea that the Beatles were the greatest rock and roll band ever, for those of you who might consider them fluff or pop or whatever term you’d care to use, let’s discuss a few points.

The Beatles were really the first act to really do… anything.  Sure, the Beatles were pretty to look at but make no mistake about it… they were punk for their day.  You just need to step back into your time machine to see it.  They were wise-cracking, rebellious and played with unlimited energy.  They baffled media and fans alike with their wit and charm.  We see the early lads wearing suits and ties and can’t believe that anyone would ever consider those haircuts daring or subversive, but they were.

You want controversial?  Fans burned Beatles albums after Lennon’s “bigger than Jesus” comments.  You want cutting edge?  The Beatles were the first band to perform stadium concerts.  They were also the first to draw that kind of crowd.  That Shea show seated 56,000 fans, many of whom had to be escorted out by uniformed policemen after fainting, climbing fences or rushing the field.  Kids weren’t allowed to go to Beatles concerts back then.  You might see lollipop now, in the early 1960s that was hardly the case. 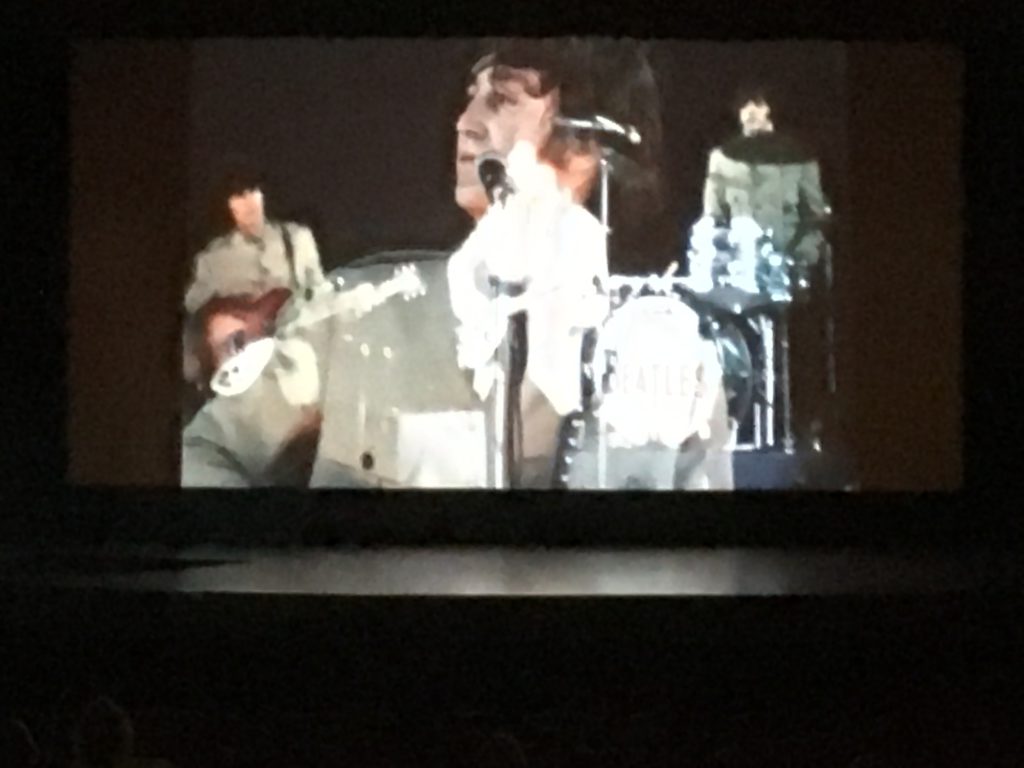 The trick is their sound appealed to all.  Their music, and influence, still resonates.  I challenge you to press play on Twist and Shout and not gyrate.  Ferris Bueller, you’re my hero.  To this day, the Beatles have more number one singles than any other artist and they haven’t released a song in almost fifty years.  At one point in 1964, Beatles’ songs held THE TOP FIVE SPOTS ON THE CHARTS!  The numbers don’t lie, my friends.

Howard’s film portrays John, Paul, George and Ringo just as they were: four extremely talented kids having fun making music and ready to take on the world.  It was as if they were born to do so.

The documentary, which I highly recommend if you’re a student of culture and the history of rock and roll, includes clips you’ve seen before and clips you have not.  Howard places their growth within the context of its time.  With everything going on in the sixties, the Beatles were a voice of reason and togetherness.  They maintained melody in a time of discord.

Touring Years includes recent interviews with Paul and Ringo and age-old interviews with all four discussing the band’s growth, how they wrote the songs, how their sound evolved and how they eventually “grew tired of the circus.”  All final band decisions were unanimous, including the decision to no longer tour.

Maybe the Beatles were lucky to come about when they did.  It was the perfect storm.  Taking nothing away from their influence, Malcolm Gladwell (interviewed in the film) said their rise coincided with the “emergence of teen culture.”  I guess that explains all the screaming and crumpled tissue paper.  Shea Stadium was so loud on August 23, 1966 that the Beatles could hardly hear themselves sing.

I wouldn’t say the Beatles are one of my favorite bands but I know their music well; I recognize and respect their greatness.  Many of you may disagree and that’s fine but their lasting influence on modern music cannot be denied.  Nor can their success.

That doesn’t mean it shouldn’t be seen.  Watching the seamless interaction between young Lennon-McCartney, their harmonies and melodies is just, well, magical.  Songwriters like them don’t even come along once in a generation.

Ron Howard does a pretty good job reminding us of that.