There’s a lot out there to protest these days.

We have highly, publicized incidents of police brutality, growing social unrest, continued and often rampant discrimination and the overall sense of unease with an upcoming presidential election the kind America hasn’t seen in years.

It’s been a while since we Americans have really had anything to bitch about.  Your average picket sign holder and national anthem kneeler aren’t the only ones unhappy with our nation’s state of affairs.  Some are making their voices heard musically.  The Prophets of Rage are five of those people.

Not only is Rage Against The Machine one of the greatest band names of all time, it’s one of the greatest rock-and-roll bands of all time.  Their high energy blend of funk, rock and politically inspired lyrics makes their sound uniquely their own.  Their music is fierce, angry and primal yet never sacrifices on its musicality.   Note: Much of their music is set to ‘Never, Ever Delete’ status on my workout playlist.  Listening to Rage guarantees a far more effective workout. 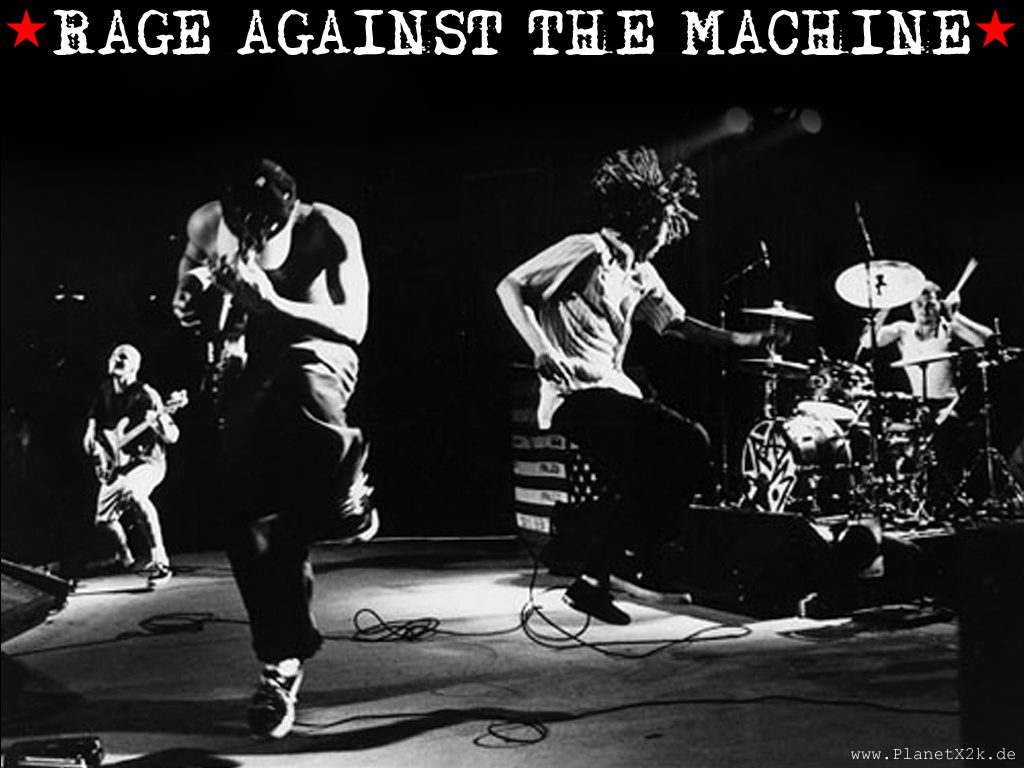 Rage, however, is not for everyone.  In fact, Rage as it was once constituted is no longer.  However, their lead guitarist and band founder, Tom Morello, decided to get the band back together… sort of, not with their usual front man and lyricist Zach De La Rocha but with two emcees from two pretty famous hip-hop acts, Chuck D from Public Enemy and B-Real from Cypress Hill.

While Zach can hardly be replaced, both emcees were more than ample substitutes.  Chuck D has been writing controversial lyrics as the front man for PE for over thirty years.  In fact, the band name Prophets of Rage comes from an early Public Enemy song, which they open with in concert.  It’s their bold, in-your-face introduction to what concert-goers are about to witness.  And B-Real’s Cypress Hill has also been known to ruffle some feathers over the years.

Morello’s main reason for “reuniting” is that modern music is no longer taking a stance against what’s going on in our nation.  He decided he wouldn’t stand for that apathy any longer.  If it’s possible to be soft spoken and outspoken at the same time, Tom Morello is just that.  Aside from being the sickest motherfucker on the planet playing guitar right now, he is also an artist of great conviction.  Hence, Prophets of Rage was born.  They started touring the nation in August and will continue to hit major cities for the rest of the year with proceeds from each concert going to local charities that care for the homeless and hungry. 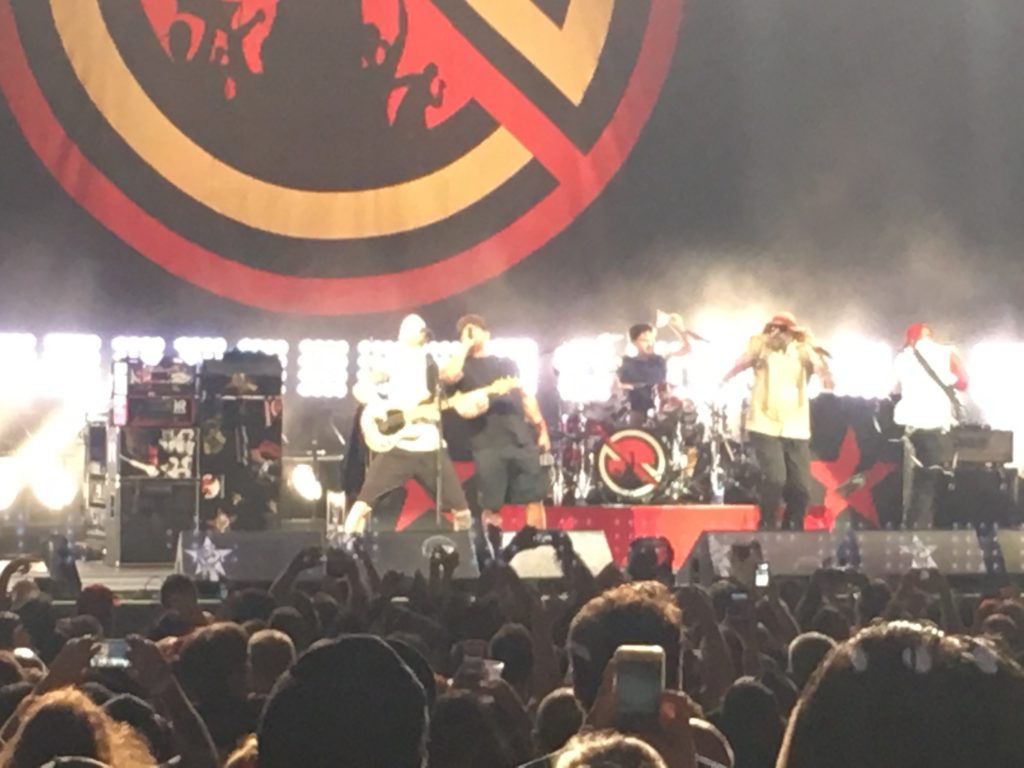 The Tampa concert I attended was on a Saturday night.  As you all probably know by now, I never miss a night of work but when I heard that this act was coming to town, I knew it was a show I could not miss.  With their break up years ago, Rage was an act I never thought I’d see.  This was my chance.  Damn if they not disappoint.

The sounds Tom Morello is able to coax out of his guitar probably weren’t thought humanly possible until he picked up an axe for the first time.  He’s the kind of guy who simultaneously inspires you to pick up a guitar yet never touch one because you know you could never, ever be as good.  If, as George Clinton attests, funk comes from outer space, then Tom Morello is an alien of the highest order.  He and his rhythm section, comprised of bassist Tim Commerford and drummer Brad Wilk, pound the one into submission with every strum, thump and crash.

I splurged for tickets, Row H, close enough to get a good glimpse but far enough away from the mosh pit for my bad back to be safe.  But let’s be honest, it was a Rage show.  The mosh potential in any row is considerably high.  The music was infectious.  When the show started, I couldn’t help but become my own mosh pit of one.

PoR plays the same set list from city to city with only slight variations so if you’re Rage-geeked like me, you knew what songs were coming which didn’t in one bit take away from the powerful music on stage.  They played all the best Rage songs: Guerilla Radio, Bombtrack, People of the Sun, Take the Power Back, Testify, Bullet in the Head, Know Your Enemy, Bulls on Parade and of course, they closed with Killing In The Name Of.  They also mixed in PE classics She Watch Channel Zero, Welcome to the TerrorDome, Can’t Truss It and Fight the Power and Cypress Hill’s Insane in the Membrane and How I Could Just Kill A Man.

Mid-show, Chuck D and B-Real got into the crowd and sang back-to-back medleys of their own hits.  There were times when B-Real even sounded a bit like Zach De La Rocha or maybe that was just wishful thinking on my part. 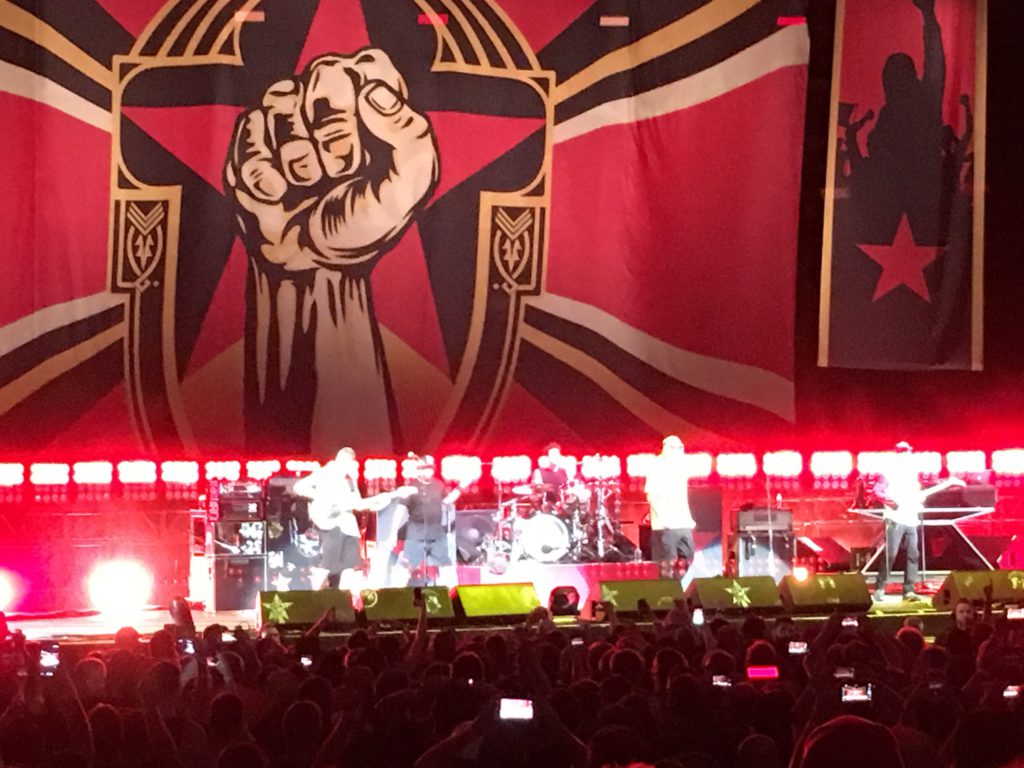 They played for two solid hours, each song more engaging than the next.  It was a surreal night with hard rain pouring down on both sides of the covered amphitheater.  At 52, the Harlem-born, Harvard educated Morello bounced around the stage, entertaining thousands who couldn’t get enough, all of us yelling in unison every time his guitar tore into the next Rage tune everyone had been waiting for years to hear.

I’ve seen some pretty good concerts at that venue.  This was one of the best.  It was a regrouping of one of America’s most powerful bands.  I left the concert with my body abuzz.  Days later, I’m still thinking about that show.  It was a bucket list concert of epic proportions.

The music of Rage Against the Machine will always hold a special place in my heart.  So will that night.

4 thoughts on “SportsChump Summer Concert Series, Part VI: Hard Rock Funk with a side of hip-hop. Rage Against the Machine Reborn as the Prophets of Rage”