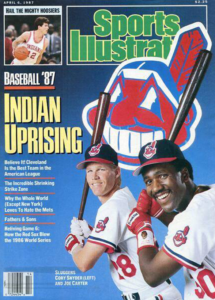 I’ve been watching baseball a long time.  Not so much recently but like every red-blooded American, I grew up in a baseball household.

Let’s just say in my lifetime, the Cubs and Indians have never been good.  Don’t get me wrong, they’ve had some good teams but they’ve never been historically good.  That’s because they’ve never won anything that mattered.  The Indians had those promising teams (remember that silly Joe Carter and Cory Snyder SI cover?) and even made it to the World Series (the only one those Braves teams ever won) but other than that the Indians have been an exercise in futility.

If it weren’t for the ineptitude of the Chicago Cubs, the Cleveland Indians would be, well, like every other Cleveland team, pre-2016 Cavs, of course.  The Indians haven’t won a World Series since 1948.

Between Bartman, goats and Rocky Colavito, these two teams have more combined curses than a Richard Pryor stand-up routine.

That just might be about to change for one of these two teams (and right now, fans of those two teams are reading this and screaming NOOOO!!!!!) 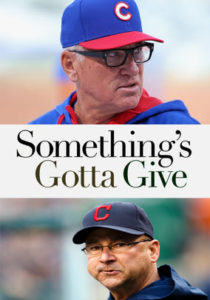 The Cleveland Indians and Chicago Cubs are headed for a collision course in the 2016 World Series and there’s not a single baseball fan (who’s not a Dodgers or Blue Jays fan) who wouldn’t want this to happen.

A Cubs-Indians World Series would feature neither an East Coast team nor a West Coast team yet it could be the most watched World Series we’ve seen in ages.  It’d be like seeing Halley’s Comet square off against Charlie Sheen staying sober.

However, in a battle of two historical underdogs, the real sadness is that one of these franchises would have to lose.  Again.

And while it will be a tremendously watchable World Series for the drama alone, that’s the worst part of it all.  One of these teams will continue its drought.  It’s like going to the animal shelter and being able to rescue one only dog.

The Cubs landed the manager they wanted (Joe Maddon), the GM they wanted (Theo Epstein) and the team they wanted.  They’ve been heavy favorites to win the World Series the last two years, ever since those two started calling the shots.

But they haven’t won… yet.

That could all change this year.  Again, shhhhhh says the Cubs fan, the most superstitious of them all.

These Indians won’t make it easy and they are hardly about to roll over just because America’s bandwagon has a soft spot for the Cubs. 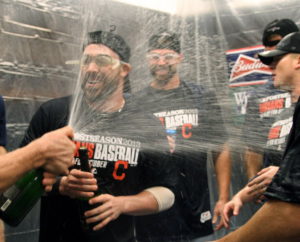 So again, while we root for a collision of two franchises that could oh so use a World Series to put their miserable pasts behind them, we should be careful what we wish for.  If the Cubs make it to the World Series and the Indians don’t, of course we’ll be rooting for Chicago.  Vice versa if Cleveland makes it and Chicago doesn’t.  But if they both make it, look out.

For when we see one of these two teams spraying expensive champagne in the locker room, we’ll inevitably see camera shots of the other, its players dejected, knowing they gave it their all but were destined to wallow with the better luck next year mantra and one inescapably looming curse hanging over their heads for at least another year.

12 Replies to “Cubbies-Tribe: The Something’s Gotta Give Series”