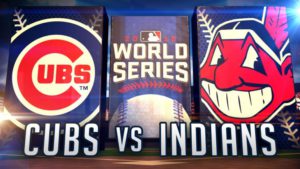 And so we have it, a World Series Game Seven for all the marbles.

Speaking of marbles, everyone in Chicago is on the verge of losing theirs if the Cubs can actually pull this off.  Expect rioting, baby making and manna from heaven all in one evening.  Same thing goes for Cleveland if they win.

Ratings for Wednesday night’s Game Seven should be through the roof… as opposed to NFL ratings which have seen a rather substantial decline lately.  The league should personally thank SportsChump for ensuring at least 15 of us are watching because of this contest.

Actually, we are now down to thirteen, ironically about the same percentage NFL ratings are down.  By virtue of only playing one week so far, Kathy F and Kurt have officially been eliminated as they won’t be able to complete ten full weeks.

For those of us still in it to win it, like the Cubs and Indians, it’s anyone’s ball game.

Here are your updated standings:

And on to this week’s line.  Best of luck to everyone.