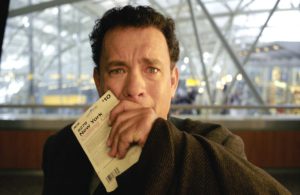 Upon arrival in Atlanta, where my flight to Memphis connected, I found Hartsfield-Jackson Airport instantly fascinating.

One could live comfortably in that airport and never have to leave its friendly confines, except for the occasional sun tanned dose of Vitamin D which most doctors recommend.  You could be like the character in that Tom Hanks, sorry, David Pumpkins movie, where he gets stranded in an airport and is forced to live there when his country disappears.

Hartsfield literally has everything you need to survive including several items I’d never seen before.  Apparently Atlantans don’t feel the need to touch anything.  For example, I found motion sensor water fountains and a store selling Atlanta Hawks jerseys.  I’m not sure who in their right mind would buy one of those but they sell them nonetheless.  Oh and there were outlets everywhere.  No need to search forever for a place to charge your electrical equipment.  For the weary 21st century traveler on the go, it was extremely convenient, as it should be considering a quarter-million passengers pass through there a day.  (Having spent some hours there lately, that number seems a little low.) 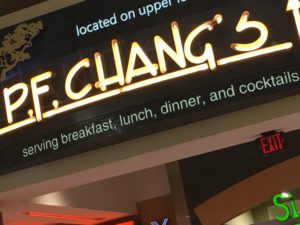 Hartsfield even has its own virtual rainforest, a PF Changs that serves breakfast and what had to be the world’s largest mojito.  That’s what I call evolution.

I saddled up to a bar near my gate to have a champagne and cranberry juice, my first official cocktail of the trip… and got carded.  That must be standard procedure here in A-Town for while I know I rarely act my age, I am hardly card-able.  Perhaps they raised the drinking age in Atlanta to 48.  As it turns out, it’s that way in Memphis too because… “that’s the law.”  I guess they like their people feeling young.

The bartender was unseemingly cranky, perhaps because it was eight in the morning or perhaps because he was a Cleveland Indians fan still miserable from the outcome of the game the night before.  Either way, his grimace and sparkling personality made me long for the automated bartenders at LaGuardia airport.  Good thing I didn’t bring my Mixologist of the Year plaques.

While walking through the airports, I played a little game called Count the Cubs fans but found surprisingly few.  I guess the Goatbusters bandwagon hadn’t spread his far south.  Turns out it was just too early.  There would be plenty more to be found throughout the day and on the trip. 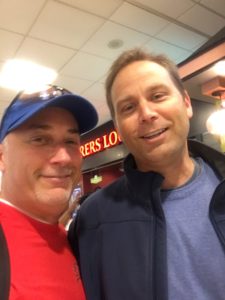 Liar North was the first to arrive on scene.  I hadn’t seen him in years.  We hopped on the plane to Memphis ready to get this party started.

Eight cocktails and two breakfasts later, we landed in Graceland and awaited the rest of the crew or to see if they’d even show.

There would be plenty of surprises in store.

2 Replies to “The Long Trek to Fayetteville, Part Deux”