I get that at times I’m beginning to sound like an old codger.  It’s an inevitable (and often quite fun) part of the aging process.

But no bad deed should go unpunished.

Not that long ago, I wrote about my shock when I encountered a ‘millennial’ who had never heard of Hall and Oates.

What I’m about to describe might be even more offensive.

At a mandatory bar clean the other night, a group of us sat with mops and sponges in hand and talked about whatever came to mind.  Our fine establishment recently employed a sweet, young, twenty-something year old who, while bright and full of energy, has her fair share of clueless moments.  Don’t we all? 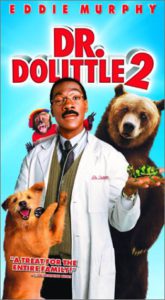 We decided to play a little game called “Movies She’s Never Seen” where the rest of us shout out classic movies we think she’s never sat through with her replying either “Yes, of course!” if she’d seen it or something along the lines of “Huh? What’s that?” if she hadn’t.

I later asked if she had ever seen Coming to America and that’s when all hell broke loose.  She replied yes, that of course she’d seen it.  It starred the guy from Doctor Doolittle.

I’m going to let that sink in for a bit.

Okay.  So that’s when most of us in the room looked at each other aghast that someone knew Eddie Murphy mostly for his role in Doctor Doolittle.

Since this rather sad and unfortunate incident took place, everyone I’ve told this story to, and there have been plenty, had the exact same reaction, a belly-aching shout of “OOOOOOHHHHHH!!!!” at the top of their lungs.

I followed up my disbelief that anyone could know one of the funniest men ever from his role in a relatively forgettable movie (at least by Murphy’s standards) by informing her that Eddie Murphy was once on Saturday Night Live.  It shouldn’t surprise you that she did not know that either.  I have yet to check this girl’s passport to see what planet she’s from.

Any self-respecting student of the history of Saturday Night Live knows that not only was Eddie Murphy on the show, he saved it.  Were it not for Mr. Eddie Murphy, SNL would most likely have gone under long, long ago, meaning there would be no Will Ferrell, Tina Fey, Jimmy Fallon, Adam Sandler, Chris Farley, David Spade, Mike Myers, Phil Hartman, Bill Hader or Tracy Morgan or at least not in the capacity that we’ve come to know them.

This is how influential Eddie Murphy was.  Two of my favorite musical artists of all-time are the Police and James Brown.  I liked the Police before the movie 48 Hours came out but it wasn’t until Reggie Hammond started singing “Roxanne” in that jail cell that I became infatuated with the band.  I had also heard of James Brown before but it wasn’t until Eddie Murphy’s Celebrity Hot Tub skit and his references to the Godfather of Soul in Delirious that I started tuning into the funk. 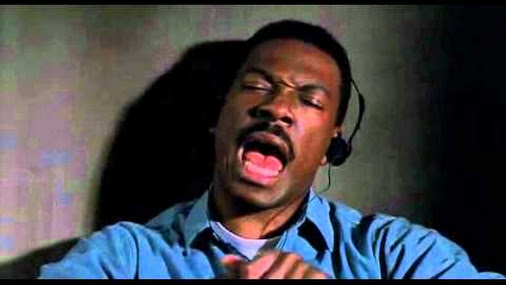 Lines from Eddie Murphy’s two stand-up movies, Raw and Delirious, are so ingrained into my memory that I can recite them verbatim to this day.  Scenes from 48 Hours, Trading Places, Coming to America and the Beverly Hills Cop movies gave us lines that exist in our (or at least my) vernacular decades later.  So do his countless SNL performances as Gumby, Buckwheat, Tyrone Green, Mr. Robinson, Velvet Jones and Stevie Wonder.

When I was a kid, Murphy was as must-see as there could ever be.  Staying up late to watch him made you cool and it damn well made you laugh.  You imitated him non-stop until the next time you saw him on TV.  As a teenager, his movies and stand-up were memorized by not just me but every single person I knew. 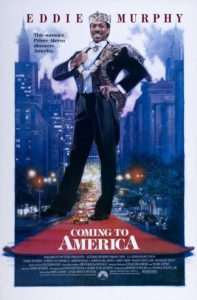 Without Eddie Murphy, there is no Chris Rock, no Dave Chappelle and most certainly no millions upon millions of laughs for millions and millions of people.  No words I write here could ever do justice to the smiles that man has put on my face for over forty years.  It’s no exaggeration to say he is one of the most influential actors ever.

When it’s all said and done, I suppose it’s not a total travesty for the younger generation to remember Eddie Murphy for his role as Doctor Doolittle.  However to not understand what he did for the lives, careers and happiness of so many is.

17 thoughts on “That guy from Doctor Doolittle”