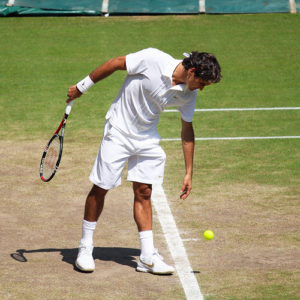 You lean over slightly, toe close to the baseline.  You bounce the ball down onto the court; it bounces back up into your hand.  You look up, across the net, staring your opponent in the eye.  He stares right back.

You check his positioning on the court, continuing to bounce the ball the right (lucky) number of times, trying to find your groove.  Is it five, six, seven?  Did that same number work last time?  Does it even matter?

You check your feet again.  How far to the right of center court are you?  How far left?  Does everything you’ve just reviewed, plus whatever else is running through your mind, even matter or should you just react?  Have you put yourself in the best position to serve that winner or are you thinking too much?

And that’s just the service.

I grew up playing tennis.  I don’t play much anymore but there was a time when I played religiously.  Of all the sports I played growing up, I can honestly say tennis was the most mentally grueling.

It is you against your opponent, mano a mano; a zero sum game.  Either he’s winning or you are.  There is no third option.

It’s why tennis players burn out so early.  Not only is the game physically demanding but mentally, it’s a mother.  Maybe it’s just me.  Maybe that’s the way I took the sport but I doubt it.  Blocking out those voices is tough business.

It is that mental toughness that makes what Roger Federer did last Sunday so amazing.  Like most objective tennis fans, I had resolved myself to the fact that the winningest tennis player of all time would never win another major.  He could have easily given up on himself as well.  He was 35 and his best tennis was clearly behind him.

Coming into this Australian Open, he was the seventeenth seed, almost entirely off the radar if his name wasn’t Roger Federer.  He hadn’t won a major in five years.  It had been fourteen years since he won his first.

But champions don’t quit and Roger Federer is that and then some.

To the world’s most famous Swiss, the Australian hardcourt was mighty kind on Sunday.  Federer was not nearly as kind to his opponent, Rafael Nadal, who holds a two-to-one edge in head-to-head victories over their careers, 23-12.  Against his Spanish rival, Federer played like he was 25 not 35.  Nadal was the one who looked old.

Despite having won five Australian Opens, Federer had never beaten Nadal down under.  Until Sunday. 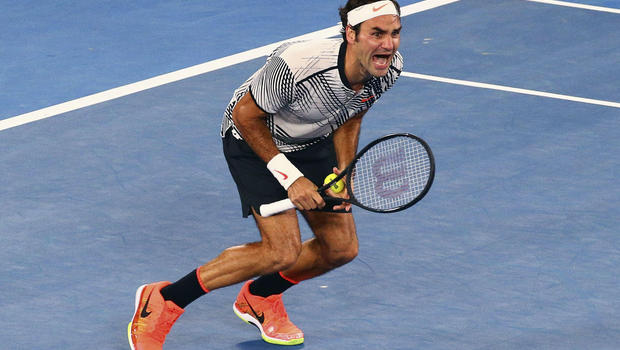 Somehow Federer blocked out all the noise and bested his opponent in a three-and-a-half hour, five set match that will likely remain one of Federer’s fondest tennis memories.

Federer has shortened his calendar year.  Still in incredible shape, he will now focus on winning yet another major, something we all thought would never happen again.

Shame on us for doubting there was ever anything left in the tank.

18 Replies to “Psychology and tennis: Old man Federer does it again”