This is why I watch basketball.  Because you never know what can happen.

After cooking a delicious meal and placing my wagers for the evening, I resigned to my sofa Wednesday night only to find ESPN showing Clippers-Knicks in prime time.  Clearly there had to be a better option.

Clippers versus Knicks: the very essence of NBA dysfunction.  I get that it’s a matchup between New York and Los Angeles but I prefer something that far more resembles decent basketball.

I soon found out I was in for a 1990s throwback that turned Twitter on its head.  It was a good thing I tuned in after all. 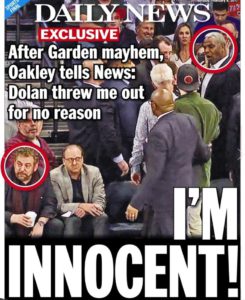 Not long after the game began, the cameras panned to the stands to cover some sort of altercation.  Apparently a fan had too many pops and warranted a visit from security.

If you’re too young and never got the chance to see Charles Oakley play basketball, allow me to describe him to you in layman’s terms.  Charles Oakley is that friend you want on your side while bar-hopping because you know, if a fight broke out, he’d finish it.  He’s also that friend you don’t want with you while barhopping because he’d probably be the one who started it.

The former Knick was as intimidating a basketball player as there ever was.  Oak Tree remains the greatest (K)nickname ever.

The story goes, and there are conflicting ones, that Oakley was jawing at Knicks owner James Dolan, who sat only a few seats away.  As the evening unfolded, millions watched as Oakley began shedding off Madison Square Garden security guards who looked to remove him from the premises, per Dolan’s request, allegedly.  I had no choice but to take to Twitter which saw Oakley’s name trending before the man was even in handcuffs.

Here are some of the more hysterical Tweets from what turned out to be just another night in the Mecca of Basketball.

Enjoy… but don’t laugh too loud.  Charles Oakley might be listening.

“Man, Football season is over…what are people going to talk about?”

I give Charles Oakley’s one-man re-enactment of the “Malice at the Palace” two resounding thumbs up.

There isn’t enough money in this world to take the opposite side of Charles Oakley in an argument.

To be fair, Charles Oakley’s assault last night would not have been called a foul in the 90’s NBA.

Do you think a jury anywhere in New York City would convict Charles Oakley of “wanting to strangle James Dolan”? #nullification

NYPD, we’ll trade you James Dolan for Charles Oakley back! He was stopping the real crime of Dolan owning the #Knicks

Charles Oakley didn’t do anything to James Dolan that Knicks fans haven’t dreamed of throughout his tenure.

On February 8, 2017 Charles Oakley tried to fight the devil, James Dolan, and ascended into heaven while draped by 37 security guards

doesn’t even matter if the Knicks won or lost tonight, Charles Oakley is the real MVP of that game #CharlesOakley

I don’t want to get too nostalgic about Oak. But when a zombie apocalypse starts, Charles Oakley doesn’t try to survive; the zombies do.

Charles Oakley got arrested. What the Knicks should’ve done was offer him a 10-day contract

If you had the Prop Bet of Charles Oakley fighting James Dolan at +3500 last night – you are a winner….and also probably Charles Oakley.

Hi, my name is Rete Pose and I want to place a bet on the Knicks to lose

14 thoughts on “When push comes to shove: The unabashed return of Charles Oakley”