Alright, I’m going to take a shot at ruffling a few feathers.  Here goes nothing.

I’ve read a lot lately about Colin Kaepernick.  In case for some bizarre reason you still don’t know who Colin Kaepernick is, he’s the former San Francisco 49ers quarterback who, within only a couple of years, went from being the league’s next big thing, to relative obscurity, to becoming a household name once again, the second time around not for his outstanding play during games but for his refusal to stand for the national anthem before them.

His “movement” caught on with teammates.  Players around the league began kneeling for the anthem in protest.  This left football fans divided, many lauding Kaepernick for taking his own, personalized stand against racial and social injustice in America and others thinking his efforts were inappropriate, un-American and disrespectful. 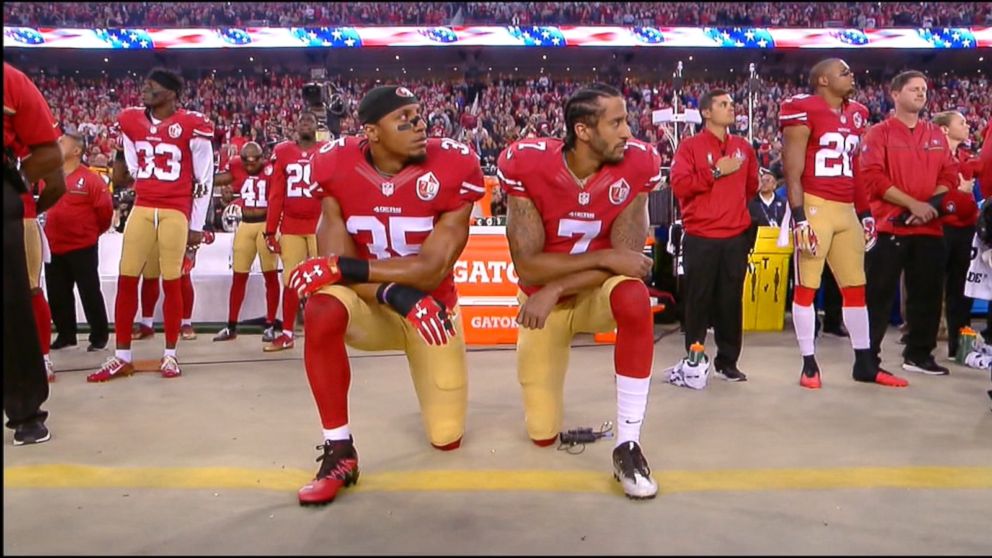 Whether he meant to or not, Kaepernick got us talking about protest again.  In the wake of his actions, however, he has become a pariah for doing so.  You might not like how Kaepernick handled his business – and to be honest, I don’t either – but he certainly caused quite a stir.

Before we get to his current battles with and reasons for unemployment, let’s flash back to 2012 when we all thought Kaepernick might become the next, NFL star: a mobile, young quarterback who could both run and throw.  In November, 2012, then starting quarterback for the San Francisco 49ers Alex Smith was sidelined with a concussion.  In only his second year, Colin Kaepernick filled in quite nicely in Smith’s absence, leading the Niners to a 5-2 record the rest of the regular season.  He marched them through the playoffs all the way to the Super Bowl where they finally lost to the Ravens in the Harbaugh Bowl.  It was at that moment when we realized Kaepernick was blossoming a little too soon.  Kids don’t win Super Bowls.  It just doesn’t happen that way.  Joe Flacco and the Ravens outplayed the 49ers that night but one thing became clear.  The 49ers had found their quarterback of the future.

The following year, in 2013, Kaepernick played his first complete season.  The defending NFC champions went 12-4 and ultimately lost to the Seattle Seahawks in the NFC Championship game.  A fledgling rivalry had developed between two young, NFC West quarterbacks that we thought would last for ages.  Kaepernick and Russell Wilson would keep football fans entertained for years to come. 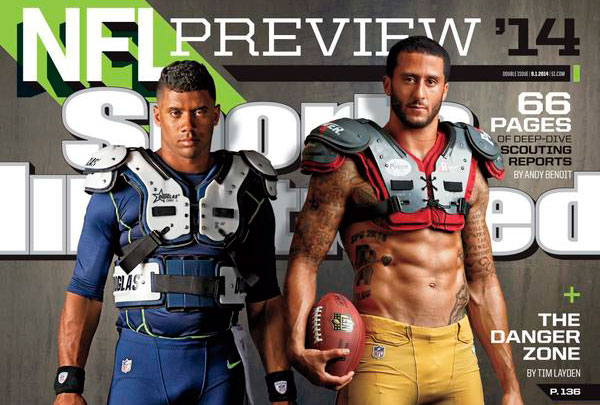 That’s when things turned sour in San Francisco.  In 2014, the 49ers sputtered, going 8-8.  Kaepernick’s quarterback rating continued to decline if ever so slightly from his promising run of the previous two years.  Head coach Jim Harbaugh decided to take his talents to Ann Arbor and the 49ers were forced to look elsewhere to find a man to coach their young phenom quarterback.

They promoted Jim Tomsula, an experiment that didn’t last very long.  The former 49ers offensive coordinator was fired after only one season.  The team went 5-11.  After starting 2-6, Tomsula benched Kaepernick for Blaine Gabbert who fared no better.  The once promising 49ers were sputtering.

They hired former Oregon Duck head coach Chip Kelly to lead the way, their third head coach in three years.  That went worse than the Jim Tomsula experiment.  The 49ers only won two games that season.  Kelly was fired as swiftly as his predecessor.  Keep in mind this is a team that was in the Super Bowl only four years ago.

Say what you want about Colin Kaepernick.  The 49ers demise was not entirely his fault.  This is the NFL, however, where quarterbacks shoulder the blame for losing records.  He didn’t play as poorly in 2016 as he did in 2015 but neither year was as promising as his previous two where we all thought he might become famous for what he did in games and not for what he did right before them.  Things devolved quickly last season.  When Kaepernick spoke out about police brutality, the Santa Clara Police Department (where the 49ers play) threatened to boycott home games.  That’s one dangerous step from turning San Francisco into Philadelphia. 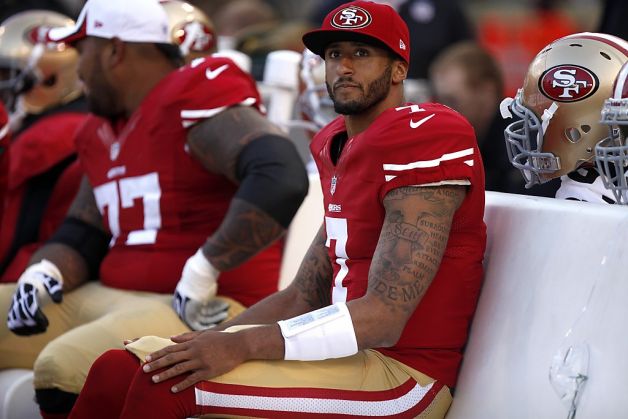 Kaepernick isn’t the only NFL quarterback to burn out and fade away.  Tim Tebow won a playoff game for the Denver Broncos against the heavily favored Pittsburgh Steelers and is now looking to make the New York Mets roster.  Johnny Manziel was drafted in the first round by the Cleveland Browns and also can’t find work.  Mark Sanchez once showed great promise, leading his Jets to back-to-back AFC Championship games.  Sanchez was recently picked up by the Chicago Bears where he will fight for but likely not keep the starting quarterback position.  That is more than we can say for Kaepernick who is not being given that opportunity.

Kaepernick is a man without a team, a free agent testing the waters and not liking what he finds.  The boo birds suggest last year’s sideline antics have everything to do with it.

Never one to curb his tongue, diminutive spokesperson for all things racially unjust in America, Spike Lee, has suggested that Kaepernick not being signed by a team has everything to do with race.  Spike Lee called it “fishy” that no team would sign him.  Lee’s not the only one speaking out about Kaepernick’s current employment status.  Of course, Spike Lee makes feature films and not football decisions.

Spike’s right about one thing.  The exclusive list of NFL owners looks like our nation’s founding fathers with very little color anywhere in the mix.  Furthermore, the NFL is a primarily black league that has struggled to promote color from within.  While more progressive leagues like the NBA have open discussions about hiring the first female coach, the NFL still struggles with its Rooney Rule, the league’s affirmative action policy that states teams must at least interview one minority head coach… before ultimately giving the position to a white man. 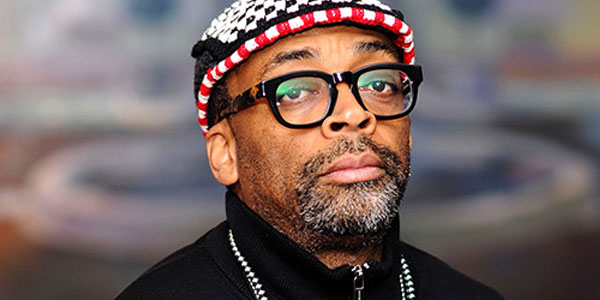 There are currently five minority head coaches in the NFL.  Since the league struggles with racial equality, it’s no wonder that the conversation surrounding Kaepernick has devolved into just that, a conversation about race, when it’s really not.

His not being picked up by an NFL team has little to do with race but our race-obsessed country refuses to believe that.  Far be it for we Americans to infuse race into a conversation where it need not be.  White/black cops shooting white/black kids is a tragedy regardless of where it takes place on the color wheel.

If Kaepernick were white and did the same exact things he did last season, would teams still have a problem with him?  If he sucked, yes.  If Tom Brady (white) or Cam Newton (black) or any of the other (effective) high-profile quarterbacks gave us a similar form of protest, would they still have jobs?  Most likely yes, because they can play.

A non-sports fan asked me the other day whether Colin Kaepernick was any good, whether there was any truth to the story of teams not signing him mostly because of his baggage.  I fumbled for an answer.  Ultimately, this is about economics: supply and demand.  If Kaepernick’s play outweighed his baggage, someone would give him a shot.  It doesn’t, therefore they are not.

Finding a successful quarterback in the NFL is risky business, business being the key word.  A quick glance at the current game tells us all we need to know.  A team MUST have a quarterback they can build around to have any semblance of success in the league.  The quarterback must have the team’s trust as well as that of his coaches, owners and fan base.  Once that’s gone, it’s hard to get back.  For better or worse, that’s what Kaepernick lost when he decided to take his stance in the form of protest he did.

Like the teams choosing not to hire him, Colin Kaepernick has also made a business decision.  It’s why he has decided he will no longer kneel for national anthems.  Did racial harmony suddenly appear in our country (not likely) or is he merely polishing up his resume for his next employer?  This has nothing to do with race.  It has everything to do with business.

In an era of what to stand for, fans are torn between athletes speaking their mind or remaining silent.  We criticize when they don’t (i.e., Tiger Woods, Michael Jordan) for fear of losing that big endorsement deal and then criticize them when they do for having the nerve to do so in the first place. 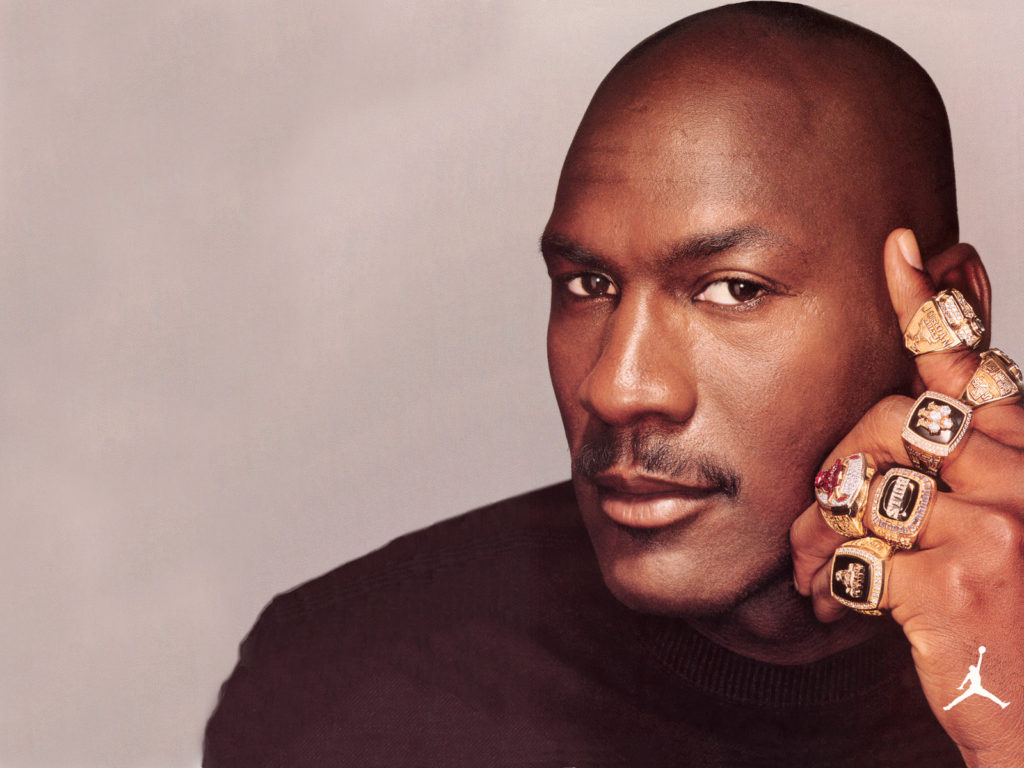 Adrian Peterson is black.  He’s currently looking for work.  Tony Romo is white and so is he.  They both bring their own baggage (salaries, past, injuries, etc.) that owners/decision makers see as outweighing performance.  In the NFL, just as in any other industry, you’re needed until you’re no longer needed.  Then you become expendable.

I’m not in charge of hiring or firing at my place of business but rest assured I can sway the owners’ decisions on personnel moves.

If someone came to me looking for work and I knew they had a troubled history that might make them in any way unreliable or that their performance might lead them to represent my business in a negative light, if they were unfit in any way to do the job, I am not going to recommend they get hired.  It’s a business decision.

Life does not take place in a vacuum.  So is Kaepernick’s decision to kneel for national anthems affecting owners decisions not to sign him?  Of course, it is.  Rest assured, however, if there were any guarantee that he’d be winning his new team football games, they’d sign him on the dotted line tomorrow, baggage and all.

16 Replies to “The race.  To not sign Colin Kaepernick”