Sunday morning came early for us late night bar-workers and ball-wagerers.  Having missed the opportunity to place my annual – and let’s be honest – required Augusta future, I looked at the final round leaderboard and thought I’d take a stab at who might bring the most value.

I messaged the already slumbering Dr. Milhouse to place a friendly wager.

Milhouse was just climbing out of bed, still soaked in rum from the night before and dreaming of a Lightning season deemed never meant to be (note: more from us on that later). 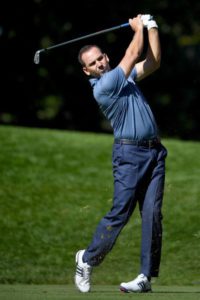 My golf bet with Milhouse came on a hunch, as all successful wagers do.

On my drive home from another night at the office, I listened to an interview from earlier that day with none other than Sergio Garcia, the diminutive Spaniard who had played in 71 consecutive Majors yet was labeled the greatest golfer never to win one.

The piece spoke briefly of Sergio, who was about to wed, having found the love of his life.  When an interviewer asked him how he felt heading into the final round at golf’s greatest event, knowing he had yet to close there, he answered with one word.

This wasn’t the contrived “calm” so many other athletes on the precipice of pressure might issue the person asking him.  To me, this sounded like a far, more sincere “calm.”

For once, Sergio seemed at peace with himself.

A lot can be said about professional athletes and their personal affairs.  We all witnessed firsthand what happened to Tiger Woods when he was caught in an unhealthy and dishonest relationship.  When it finally caught up to him, his golf career dismantled.  Injuries of both the mind and the heart led to his demise.  A golfer we thought the greatest ever failed to live up to his destiny.

Sergio Garcia was never that guy.

Let’s be certain.  Like most other golfers on tour, Sergio probably had his share of the good life.  A fairly attractive, single male with plenty of women on tour wooing him at every stop, we never heard of Sergio taking home Perkins’ waitresses by the dozen.

Now came news of Sergio tying the knot, a decent guy, happy and in love.  While many relationships have led to athletes failing apart in the past (again, see: Tiger), perhaps love had finally found its way.  Perhaps this was Sergio’s time.

I placed my wager with Milhouse accordingly.  I called it my hunch on love.

Furthermore, I logically gathered, with Sergio’s career-long record of coming up short (no pun intended), Las Vegas would likely have the lines skewed.  Nobody in their right mind would bet on Sergio, not after what he’s done in the past.  I found him at +400, not a bad number considering he held a share of the lead going into the final round. As Sunday began, with the co-leaders (Garcia and Justin Rose) teeing off at the traditional 2:30ish, I was swamped at work, slinging drinks at my award-winning pub which laid smack dab in the middle of Ybor City’s annual Italian Festival.  Thousands came to partake in the local festivities, drink some adult beverages and watch as Sergio and others braved the elements at Augusta National.

When I had a brief chance to check the leaderboard at about 4 pm, Sergio had what seemed like a comfortable three-stroke lead.  Sergio was destined to win; his victory renewing my faith in love.

My wager was small stakes but a wager on karma nonetheless.

Busy as can be, I looked up in another hour to see Sergio had collapsed or rather, another golfer had gained ground.  I was too busy to gather the details.

Both he and Justin Rose stood tied at eight under par.  So much for living happily ever after.

That’s when I saw Sergio miss a sure-fire putt for bogey.  The next time I looked up, I saw Sergio’s tee shot behind a tree deep off the fairway.  After being up three, Serg had dropped behind the lead.  He was tensing up like a man at the altar.

Sergio bogied ten and eleven.  That’s what I get for betting on love.  For me, it was another misplaced wager and back to pouring Guinness for the masses at hand.

Both Rose and Garcia approached the 18th green tied for the lead.  Rose, a Major-winner with much less to lose than the man he was competing against, missed a makeable putt leaving Sergio with an even more makeable putt to etch his name in history.

On one of the uglier putts you’ll even see, Sergio missed his green jacket wide right, sending the tournament into sudden death, my wager on love un-restored.

Until… the first playoff hole.

Rose shanked his sudden death drive into the woods only to see Serg surge, his drive flying past Rose’s deep into the fairway.  After Rose chipped out, Sergio stuck his approach feet from the pin.  With strokes in comfort, Sergio faced certain victory. 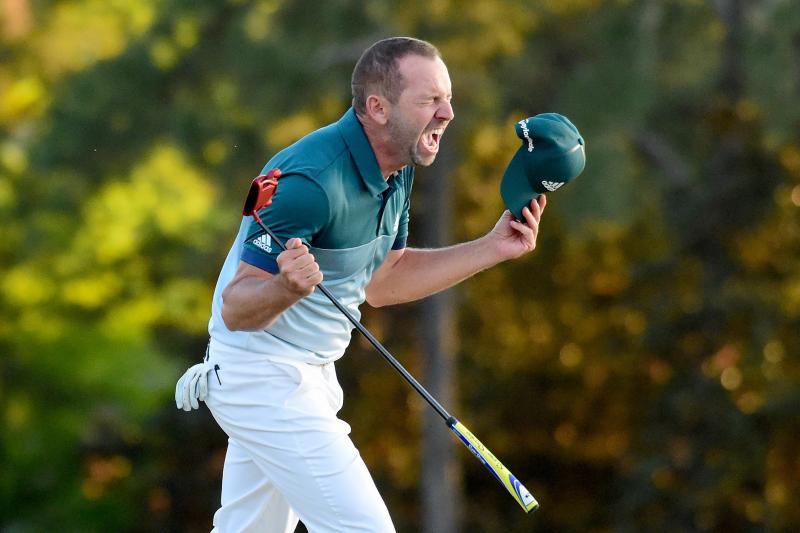 The groom not yet with a ring on his finger had finally found true love.  Sometimes hunches do come true.

Of course, my minimal wager paled in comparison to what Garcia had on the line on Sunday, both in his career and his personal life but the point is, in the end, true love won.  It always does.

We all find the funniest hunches to play.  It’s how we follow our heart that ends up showing us the way.

Sometimes some of us are even lucky enough to find it.

14 Replies to “﻿Placing my bets on love… and Sergio”