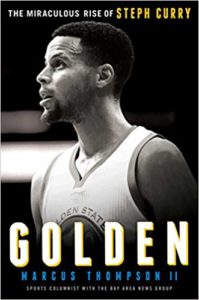 Curry’s rise to superstardom is the focus of a new book entitled Golden: The Miraculous Rise of Steph Curry by Marcus Thompson II.  Thompson is a local beat writer, covering Curry’s Golden State Warriors for ten years, so who better to write about him than the man who covered him his entire professional career?  Talk about being in the right place at the right time.

For any hardcore basketball fan, Curry’s success is captivating.  Last year, when I found out he was playing in Orlando, I drove 100 miles to splurge on a ticket.  He scored 51 that night.  I wasn’t the only one in the arena there to see him either.  How many athlete these days would you say that for?

I’ve seen Michael, Magic, Larry and even this year Russell Westbrook do insane things with a basketball.  I’m not sure I’ve seen any athlete do what Steph Curry did in 2016.

He made ridiculous shots seem effortless.  He made shots you’d shake your head at at a ridiculously high percentage.

Golden is a case study in Curry’s allure.  He tackles some pretty healthy issues in doing so, i.e., race, upbringing, entitlement and desire.

I’ll be honest though.  My main problem with Golden is that it didn’t tell me anything I didn’t already know.  For example, if you had been paying attention to Curry’s ascension into NBA royalty like any good basketball fan should, then you’d know most every detail in the book.

The book mulls on unspectacularly and often repetitively.  That is until Chapter Eight when Thompson gets to the meat of the issue.  It’s hard to say anyone really hates Curry.  He’s one of the top selling jerseys and plays on a team that draws the highest ratings in the league.  When I saw him in Orlando, there were more fans in Curry jerseys than anything else and he played for the visiting team!

The Warriors are a high-powered, up-and-down, barrage of threes kind of team that has flip-flopped its identity, which I suppose is only natural when you win too much.  Do you like ‘em?  Do you hate ‘em?  At the head of it all is the baby-faced assassin, just waiting to drop thirty on you and make it look effortless.  Thompson reminds us that this all happened faster than we could process.  And he’s right. 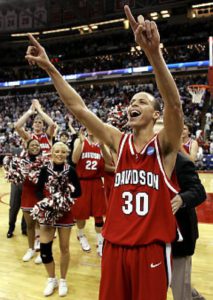 We knew who Curry was coming out of Davidson.  He took his team to the Final Four.  But the hype surrounding him coming out of college wasn’t like it was for most other NBA superstars.

Thompson traces Curry’s path, from NBA son to college and into the pros where he was ultimately surrounded with enough talent to win an NBA title and break records in the process.

But again, we knew that already.  Chapter Eight is where Thompson gets into the nuts and bolts of the perception of Curry, especially among his NBA brethren.  How much social truths reside in his statements is up to the reader to decide.  Thompson brings up the underlying assumption that any resentment of Curry is racially and socially biased…

“On the surface, it would seem that having a professional basketball player as a father would give a player a certain credibility.  But having that on the resume doesn’t scream pedigree as much as it screams privilege.  Curry represents those who had the smooth ride, who never had to play with busted shoes, who could afford fancy camps and travel tournaments.  The automatic assumption is that he got access and attention because of money, because of his NBA father, and not because of his game.”

Now anyone who has seen Curry play (or God forbid had to cover him) knows the kid can torch you.  He’s also far tougher than he looks, deceivingly so.  Although slight of frame by NBA standards, few other athletes in the game work as hard as he does.  His back-to-back MVPs are no fluke.

He was inspired by ACC schools not recruiting him, driven by the multiple guards drafted before him and Nike not being committed to him.  As if Curry needed more motivation to be great, these all fueled him, according to Thompson.  That and his faith.

Golden is a decent read.  It provides insight you might not otherwise have known, that is if you’re not a dedicated Curry fan.  I enjoyed it.  It’s a fair assessment to what Steph Curry means to the modern game.  I’m just not sure it’s as poetic as watching him play.