There’s a certain je ne sais quoi when it comes to top-tier NBA athletes.  Jordan, Bird and Magic all had it.  Kobe and Shaq had it.  For the longest time, we wondered whether LeBron had it.  He ultimately proved he did, thanks to his buddy, Dwayne Wade.

The baby-faced assassin has it but we’re still not quite sure about his newest running mate, Kevin Durant. 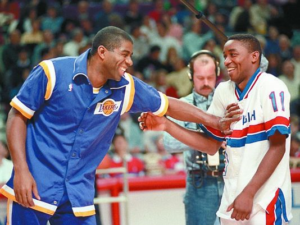 You can always play the role of nice guy on the court or in commercials – cue Magic Johnson’s and Isiah Thomas’ bright and beaming grins – but to win a championship, to truly become an NBA great, you have to care a rat’s ass about the opponents outside your locker room and apparently even less about their mascots and fan bases.  Cue Kevin Durant’s long, arduous path to not giving a shit.

I’ve always liked Durant… perhaps because I don’t live in Oklahoma City.  I always respected the kid’s soft-spoken fearlessness.  His game represents exactly that, dunking with reckless abandon or canning jumpers from thirty feet as if he wasn’t aware a man of his gangly stature isn’t supposed to be doing either.  But hearing him tell a reporter that he “doesn’t give a damn about no damn Drake night” or telling a mascot to “get the fuck off the court” gives me the impression that the one they call Durantula is one step closer to reaching greatness.  Sometimes all it takes is a curse word and a gesture.

Not long ago, Toronto hosted a night celebrating the most famous Raptors fan north of the border: Drake.  Durant didn’t care too much for the honor.  He has a job to do and any blaring of Drake’s music only interferes with that order.  His Warriors went on to beat the Raptors by six that night.  Durant scored thirty.

After the game ended, assuming a friendship that didn’t exist, Drake bumped into Durant who was in the middle of giving an interview.  Durant took care of that in quick order.

Drake’s not the only one this season to feel Durantula’s sting.  Last week, in Utah, the home team’s mascot named Jazz was on the floor trying to get fans fired up.  Note: I’m not sure why Jazz fans would be fired up facing inevitable defeat against a far superior Warriors team but the bear was doing the best he could.

During a time out, Durant felt the mascot was spending a little too much time on the court as play was about to resume.  In no particular order, Durant told the man in the mascot uniform that ten men and one bear on the floor was one bear too many.  He coolly muttered “get the fuck off the court.”  There’s no telling whether Drake was the one in the bear outfit.

This was no Charles Barkley wrestling a mascot for fun.  This was Durant in game mode, just a glare that says no bear should get in this man’s way.  The mascot won’t make the same mistake twice.

Kevin Durant is smack dab in the middle of defining his legacy.  You can be great without ever winning a title (Barkley, Iverson, Malone, Ewing) but Durant knows that greatness comes with a stipulation, an asterisk… a but.  Durant will go down as perhaps the baddest, 6’11” perimeter player we’ve ever seen.  He wants what LeBron has, what his current Warrior teammates have.  He’s now taking it out on anyone who gets in his way, including rappers and mascots.

Fourteen years into the league, three titles and four MVPs later, LeBron James would never dream of telling a mascot to “get the fuck off the court.”  In a frilly, fluffy, well-designed interview, he’d go on and on about how he loves Drake’s music.  He jokingly grabs beers from courtside waitresses as his momentum carries him into her path.  His image is carefully crafted.  Durant doesn’t give a shit.  He has the look in his eyes that he will destroy anyone and anything on his path to greatness.

We have another month to see if that happens.

James and Durant are once again on a collision course with legacies on the line.  It’s starting to look like Durant will stop at nothing to etch his name in NBA lore.  The only problem is that he has one really big bear named LeBron still standing in his way.