The following story goes to show you just how out of touch with reality we are and how somewhere along the line, our priorities became severely out of whack, assuming they were ever in the right place to begin with.

Michael Phelps recently raced a shark. Well, he didn’t race in the same pool as the shark (which apparently upset a few of the people watching) but he raced against the hypothetical time a shark would swim were it swimming alongside him. He is, after all, the greatest Olympian we’ve ever known (that doesn’t now wear a dress) so he can do pretty much whatever he wants.

It’s not the worst idea we’ve ever had. After all, this is a country where one-and-a-half million people watched the premiere of Sharknado which goes to show that a) Americans like sharks and b) much like sharks, we will consume anything you put in front of us, therefore #PhelpsVsShark

The whole event was part of the Discovery Channel’s Shark Week, a cult classic considered by many to be one of the most entertaining weeks on television. The people who think this also need to get out of the house more.

Some of those same people are the ones who got all butthurt Phelps didn’t race a real shark, as if a) they actually for one second thought he would get into the pool with a real fucking shark and b) they didn’t have enough common sense to realize the idea of that ever happening is preposterous. 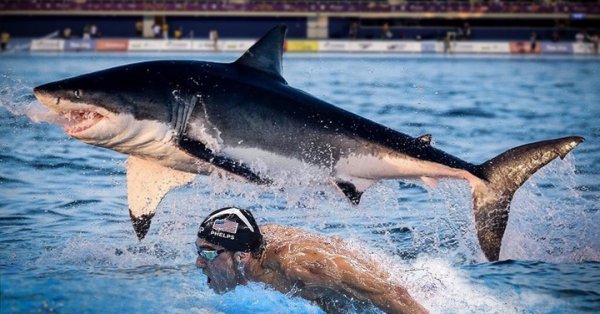 There are four types of people in America: those who heard about this event and thought Michael Phelps would actually swim in a body of water against a live shark, those who had enough common sense to realize this was a made-for-TV event that would feature nothing of the sort, those who didn’t give it any thought but if they had would have realized Michael Phelps wasn’t going to get into said body of water with the ocean’s greatest killer and those who gave zero fucks about the event altogether. I straddle between the third and fourth categories. In fact, I still haven’t seen the race. I had eight million better things to do.

But I did get a kick out of the national outcry, as if we have nothing better to worry about.

Either way, I thought I’d share some of the more humorous Tweets regarding yet another piece of American history uniquely our own that proved, if nothing else, at least we all still have a sense of humor. Please do enjoy them, swimmingly.

Kellen‏ @RealKellenFrank
Next on Discovery: could a white shark beat Michael Phelps in a footrace? We simulate a shark flopping agonizingly along a track to find out

K Maxwell Klitzke‏ @maxwellklitzke
Very disappointed there was no qualifying round for the sharks to race Phelps. How do we know we’re watching the Michael Phelps of Sharks?

Lord Single Malt‏ @Singlemaltfiend
If you thought Michael Phelps was actually going to race a shark side by side I have a Russian election conspiracy theory to sell you.

Other Mike Parsons‏ @OtherMikeP
Who’s more disappointed the people who watched Michael Phelps race a fake shark or the people who will buy the Mayweather/McGregor fight?

Pat McAfee‏ @PatMcAfeeShow
Would be nice if Phelps humbles a great white tonight.. low confident sharks are good news 4 the rest of the ocean

Sam White‏ @samwhiteout
Saying Michael Phelps raced a shark when in actuality he raced a computer simulation is like saying you saw Tupac live at Coachella.

Paula Poundstone‏ @paulapoundstone
The shark won the race with Michael Phelps by a snout. Later, in a rambling interview, the shark said, “I won the popular race, too.”

8 thoughts on “Phelps, sharks, Tweets and the continued shallowing of America”