An odd thing happened on the way to the golf course.

I normally don’t golf on Sundays.  Those days, at least during football season, are reserved for sitting on my sofa and obsessing over my far too often, ill-advised wagers and fantasy lineups.  With the regular season coming to a close and the playoffs forthcoming for some, I decided to hit the links for a rare Sunday outdoors.  The conditions could not have been more inviting.

My golfing partner for the day just happened to be the same person I was going against in fantasy football for the week.  The trash-talking would make for an interesting outing.

I left SportsChump Manor shortly after the 1 o’clock games had begun.  My starting tight end, Travis Kelce, had scored two touchdowns in the first five minutes of the Chiefs-Jets game, giving me a comfortable lead.  My W for the day and shoo into the post-season seemed a foregone conclusion.  I would be able to focus solely on golf and not obsess about the numbers.  Victory… would be mine.

That, my friends, is what you call putting the golf cart before the horse.

After stopping at the bar to liquefy, my opponent and I were off.  I shot a healthy par on the first hole but the minute I started playing well, my fantasy team shit the bed.  My cart partner’s team was staging an early comeback.  For some ungodly reason, he had benched Dak Prescott for… Josh McCown?  Little did he know it might have been one of the shrewdest fantasy moves of the year.  McCown garnered him 32 points!  It was his highest total of the season. 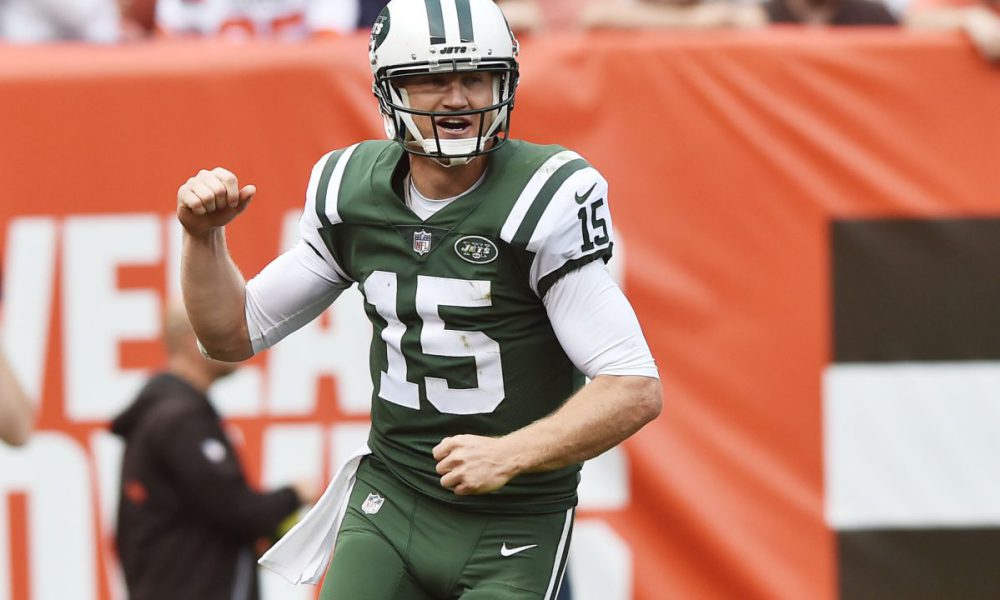 The second hole, I shot a seven.  An errant approach put me in the left bunker short of the green.  It took me three shots to get out.  Par-triple bogey was no way to start a round.  At that point, a record-setting day on the golf course was the furthest thing from my mind.  Fucking Josh McCown!

However, that’s probably why I played so well from there on out.

While McCown continued to distance his team from mine with me checking my phone every stroke to find that out, I finished the front nine bogey-par-bogey-bogey-bogey-par-bogey.  After that disastrous second hole, I had only penciled one six onto my scorecard.

Too busy obsessing over my fantasy lineup, I never tallied my score on the front.  I knew I had played well.  I just didn’t take the time to look at the number until later.

By the time we got to the turn, the four o’clock games had started.  Marshawn Lynch, Derrick Henry and Greg (*&@#&^) Zuerlein had followed in McCown’s footsteps and begun to do their damage (28, 26 and 17 points respectively) while my team could barely muster up a cloud of dust.  Who the hell loses to that lineup when I was starting guys like Cam Newton, Leonard Fournette, Todd Gurley and LeVeon Bell?!?

Yet I played on.  Whether I was playing out of fantasy anger or just not paying attention to my normal routine, whatever I was doing worked.

I started the back nine bogey-par-par-par.  And then came hole 14. 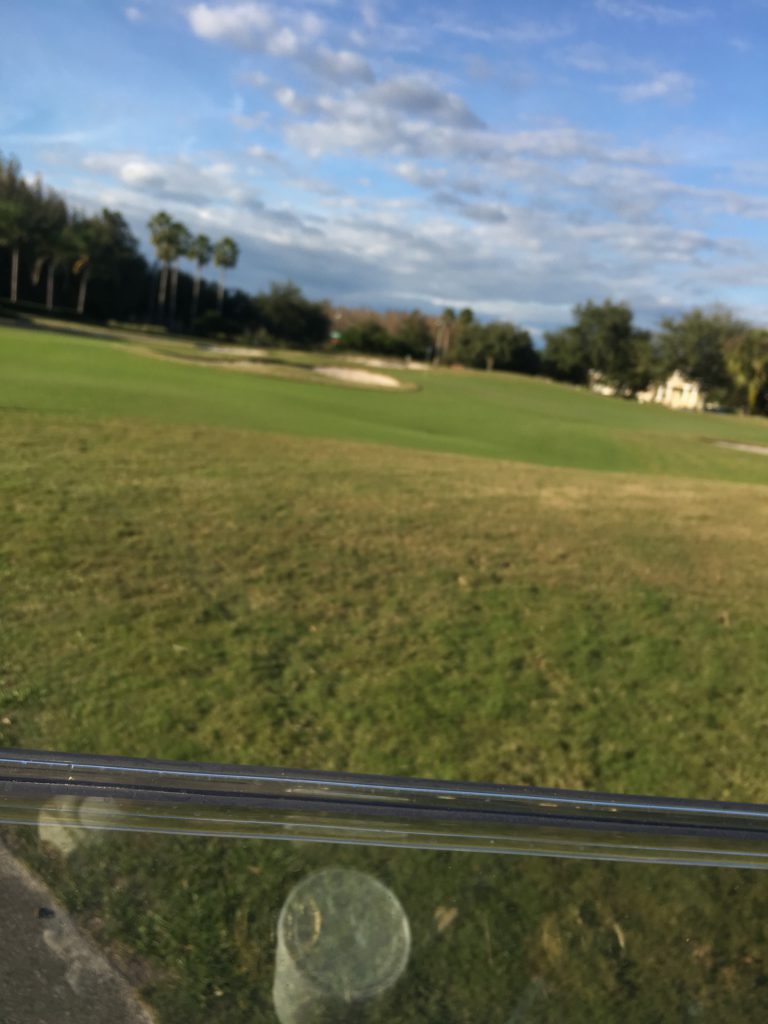 I’d like to say I had the video for this memorable life moment but unfortunately, I have to chalk this up to user error.  After a nice drive up the left side of the fairway, I had about an 8-iron to the pin.  And what an 8-iron it was.

I landed the ball about an inch-and-a-half from the hole.  It was as smooth a swing as I’d ever hit.

As I drove up to the green to see how close the ball actually was, I hit what I thought was the video button on my phone to capture the moment for posterity.  Instead, I ended up on my posterior.

Excited to see how close the ball hand landed to the pin, I got out of the cart while it was still moving and while I was still filming… or so I thought.

My left foot landed first, then my right, but the momentum of the cart kept me moving at a pace my feet couldn’t handle.

Still filming, again, so I thought, I stuck, tucked and tumbled, somersaulting twice along the fairway, all the while staring at my PGA Tour-quality shot.  A less-fit fifty-year old probably would have done some bodily damage.  Like a gymnast, I stuck the landing, coming back up on my cleats after a full 720 degrees on the ground.  Trust me when I tell you it would have made a .gif file for the ages, America’s Funniest Golfing Videos times Ridiculousness to the nth power.  I ran up to the green as my partner watched on in amazement, unfortunately not filming.

I approached the ball to find it a whisper away from the pin.  I clicked on my phone knowing that this would be the video to end all videos, me a-stumblin’ and a bumblin’ while filming all along, a YouTube upload destined to go viral… only to find it was on photo mode and never captured the moment.

Had I not just hit the shot of a lifetime, I would have been besides myself (covered in grass).  Suddenly, my fantasy team, which at that point was down by fifty points (I was favored to win the week by twenty) didn’t seem to matter.  I was pretty sure Josh McCown had never hit a shot that pretty. 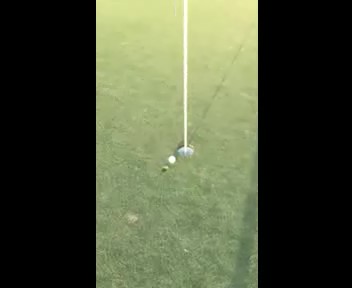 After that tap-in birdie, I finished the round with four straight fives.

And still, I hadn’t counted my score.  I knew it would be special, far more special than my four fantasy running backs could muster.  I had gone the entire round not worried about score (as I always do) while channeling my obsession onto fantasy football.  It took my mind off my usual, clearly error-laden routine.

After putting in for bogey on 18, and just barely missing a lengthy putt for par, I returned to the cart to count my score.

It was by far my best round ever.  Not only was there just one seven on the scorecard (the second hole) but I didn’t lose a ball the entire round, playing with the same old, scuffed up Wilson.

So, what’s the lesson to be learned here?  I’m not quite sure.  Golf is an evolving game, especially for me.  I had told myself I would shoot a round in the eighties before the year was up and I did. 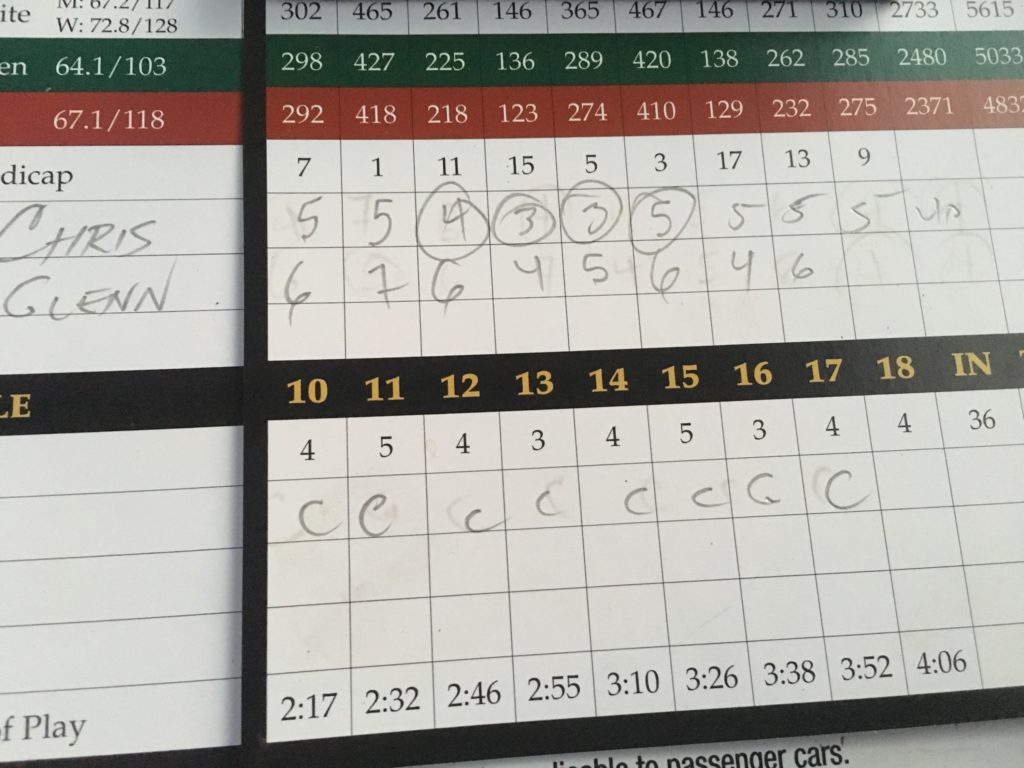 11 thoughts on “It was the best of days, it was the worst of days: Where golfing and football fantasies collide”