“It’s not always the word.  It’s the context in which the word is said.”

Anyone who has ever felt tongue-tied in a moment of pressure can relate.  Probably not as much as multi-million athletes or movie stars whose words can cost them their careers but pressure nonetheless.

In this day and age of rampant miscommunication and soundbites gone awry, I’d like to present an example of how the context of an interview can change our entire perception of a person who resides squarely in the public eye.

Picture if you will, a talented young, African-American wide receiver put on the spot.  With sixty-plus thousand fans screaming behind him, he has just scored a game-winning touchdown, a walk-off score that will forever live in Minnesota folklore.

His life will never be the same.  A microphone is suddenly shoved in his face. 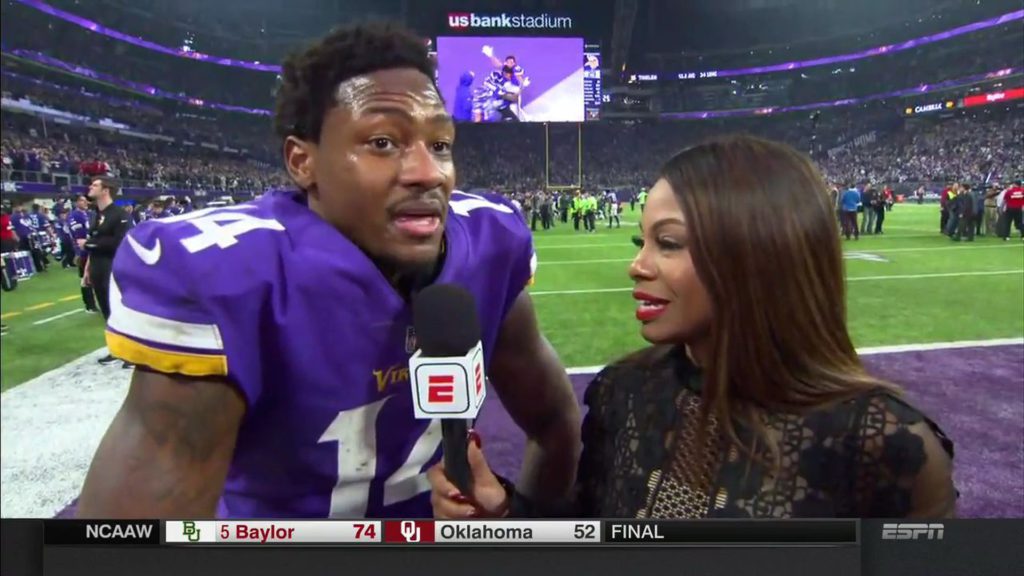 A 24-year old Stefon Diggs has dreamed of this moment for as long as he can remember.  That’s when ESPN reporter Josina Anderson asks Diggs how he’s feeling.

Here are two clips of the very same interview and you tell me if you can spot the difference.

Here’s video one, the shortened version, which many of us saw.

This clip is posted to YouTube entitled “Damn That Shit Feel Good.”  Had we not seen the play or paid attention to the game, we would see a football player, perhaps unaware of his surroundings, taken aback by the moment, paying brief homage to his faith and then cursing not once but twice.

You probably didn’t get the greatest first impression of Stefon Diggs if you had never before heard him speak.

Now pay attention to the entire interview… and see if you’re not moved.

Here we find a young man who has been humbled by his faith and the years of hard work he has dedicated to his craft.  After seeing the entire interview, have you changed your perception of the man… and perhaps even of yourself?

We watched a lot of good football this weekend.  It is because of plays like this, made by players like this, that we gravitate towards sports at their highest level.  It’s because of soundbites like these that we form our own opinions of players, quite often incorrectly.

The media, in all its forms, has the power to shape public perception.  We, as consumers, have the power to digest them in the manner they are distributed.

I’m not here to tell you Stefon Diggs is a good guy.  I’m just saying you might want to listen to the entire story before you jump to any conclusions.

14 Replies to “Interviews, context and the real Stefon Diggs”