I’m a non-committal sort.  Always have been.  Which is why I am really starting to dig this Tom Brady guy.

Not that Brady is non-committal.  At 40, he’s still at the top of his game.  The man is clearly committed to his craft.  Otherwise he wouldn’t be (among) the best to ever play quarterback in the NFL.

All I mean by him being non-committal is when it comes to giving the media an answer, for example last week when asked about his wounded hand, he sounds a lot like yours truly.

“We’ll see,” you see, is one of my go-to’s.  It’s as solid a maybe as you’re ever gonna get.  When asked if he would play in the AFC Championship game, an absolutely ludicrous question in retrospect, Brady dropped an epic “we’ll see.” The media ran with it hook, line and we’ll seer. 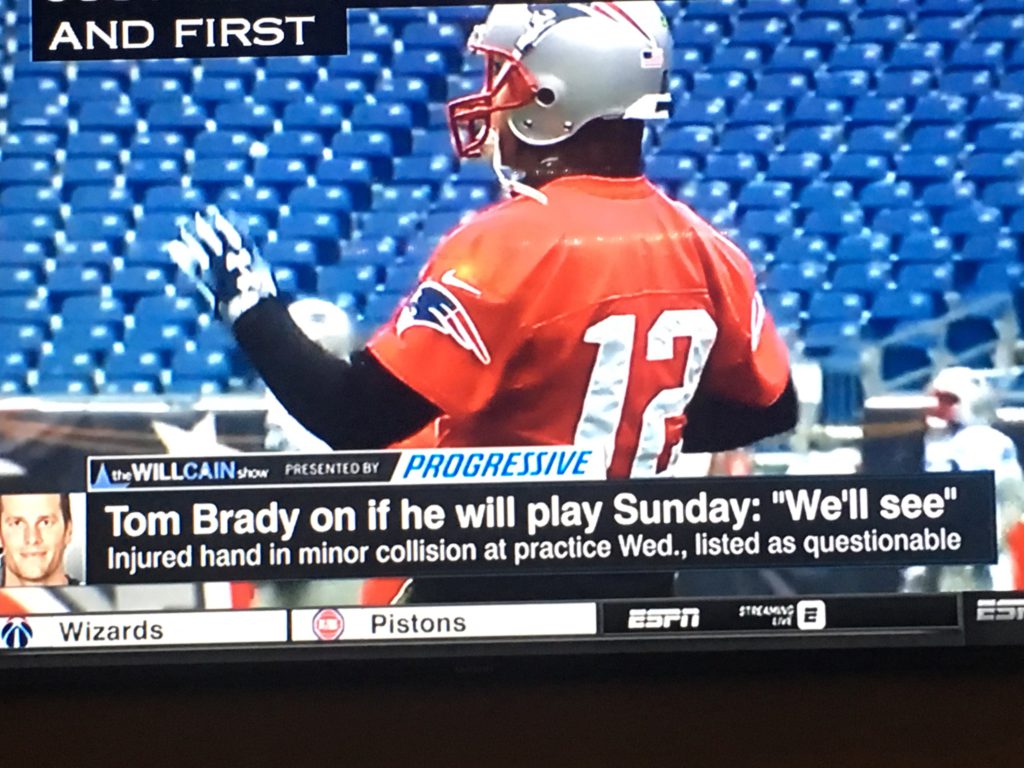 I know I’m about to piss off about 90% of my readers (and ingratiate myself with the other 10%) but I’m really starting to appreciate the way the Patriots handle their business.  You can call it band-wagoning (I’m only pulling for them because I wagered on them – wisely). You can call it relating with my fellow, senior citizen (I’m slightly older) but Brady continues to get it done and piss off the multitude in the process. 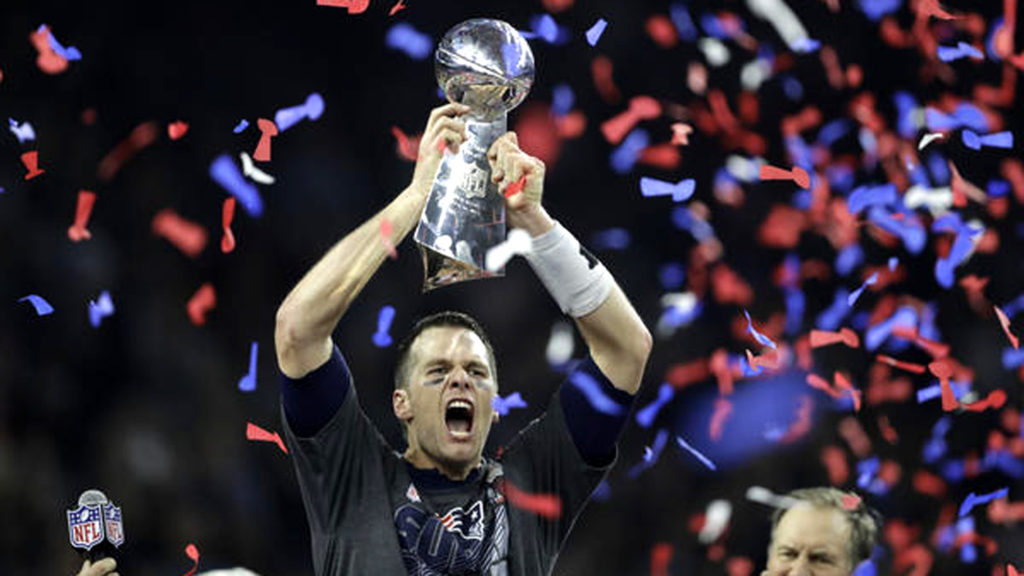 Trust me when I tell you I have no dog in this hunt.  I root for one of those other thirty-one teams that has been woefully irrelevant while Brady’s been in office so I consider myself a partial observer.

Here’s how much those outside of New England hate Tom Brady.  When I ask random people who they think will win the Super Bowl, the most common answer I receive is “Hopefully not the Patriots” which tells me they a) they hate the Patriots and everything they represent and b) they inherently think the Patriots will win.

That’s because we’ve seen it all before and know how it’s going to end.

Back in the day when Michael Jordan was running rampant over the NBA, everybody was a Jordan fan, and by everybody, I mean everybody that didn’t hail from a city whose team he destroyed.  I had this one friend, however, who hated Jordan with a passion.  Either he refused to jump on the Chicago Bulls bandwagon the rest of the nation sat so comfortably upon or he genuinely just disliked the guy.

And he always ended up bitter because Jordan always won.

Brady doesn’t always win but it certainly damn seems like it. 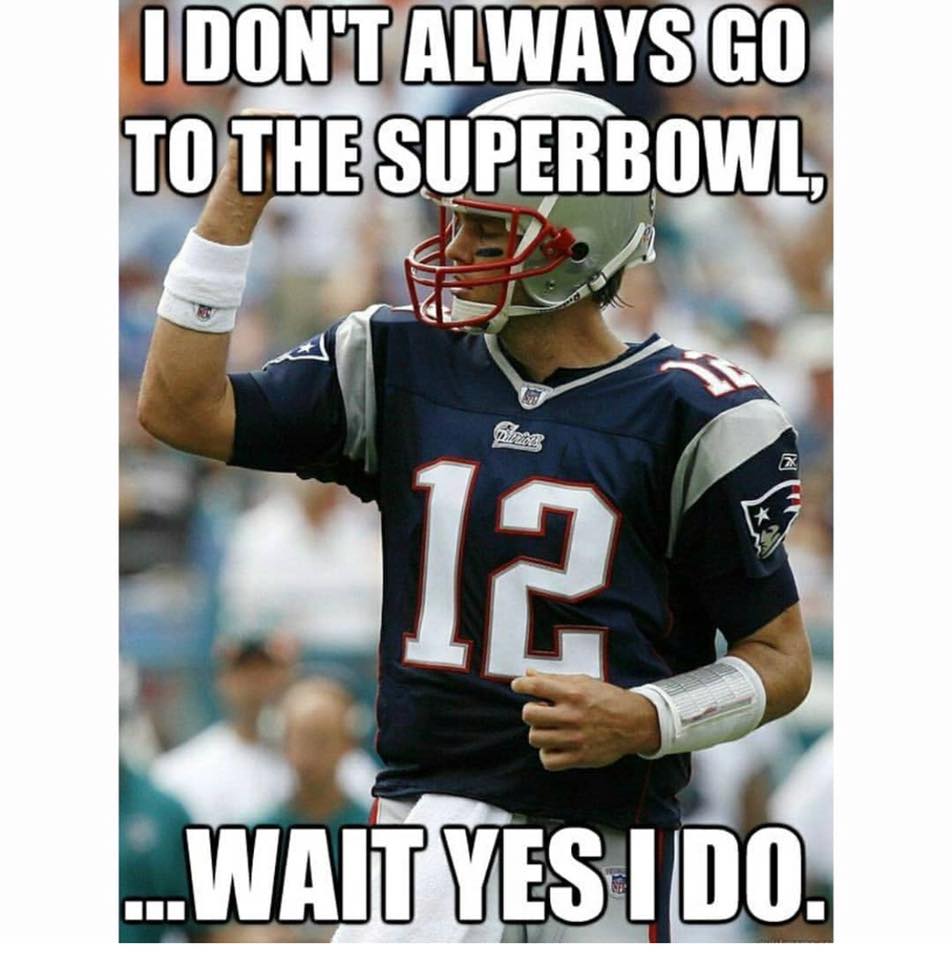 Set aside the five Super Bowl rings, soon to be eight (that’s insane!) Super Bowl appearances, super model wife and overall “I could give a fuck” demeanor, the guy has that assassin-like attitude every time he puts on his helmet.  He’s business-like.  He works harder than you and I will ever give him credit for.  DeflateGate jokes aside, his competitive spirit ranks among the greats.  Ladies and gentlemen, you wanted the next Michael Jordan.  He happens to be playing football for the New England Patriots.  Those “Joe Montana is greatest quarterback ever” arguments are quickly losing their steam.

Brady also knows how to work a microphone better than Adele on karaoke night.  His “we’ll see” line couldn’t have been more Belichickian.  When asked about his allegedly ailing hand, Brady channeled his inner SportsChump and gave the answer that perfectly exemplifies everything the tight-lipped, Patriots organization has represented over the last fifteen years.  He might as well have replied “Nunya” and held out his middle finger.  The one on the good hand, of course.

Belichick and Brady are masters of deception, encouraging the media to focus on something (Brady’s hand) while ignoring everything else.  It’s the bait and switch worked to perfection, a subterfuge.  How many pre-AFC Championship Game headlines did you read claiming Brady’s hand was “a bloody mess?”  He wore gloves into the press conference to either conceal an injury or make you think it was worse than it was.

Even SportsCenter, our nation’s source for all things slanted on sports, led a late week broadcast with the news that Patriots’ backup quarterback Brian Hoyer would start against the Jaguars… on the bench.  Har har!

In other words, Jacksonville had already lost the game before they stepped on the field.  Any question they had to answer about Brady’s hand played into their opponent’s, wait for it, hand.  In the battle of wits, the Patriots are a strong one-up against a league that should be playing the same game… but isn’t.

How is it that a league that strives for parity can see the same team reach the Super Bowl eight out of the last seventeen years?   The Patriots will never tell.

There are three schools of thought when it comes to the Pats: those who hate them, of which there are plenty, the homers who love them and think they’re “doing God’s work” and those neutral football fans who appreciate that they’re owning a league that doesn’t want to be owned.

Rest assured, after Brady’s gone, it won’t be long until we start calling quarterbacks the next Brady.  Whether it’s Jared Goff, Carson Wentz or a person that hasn’t been drafted yet, we’ll apply that label just as we called Kobe and LeBron the next Jordan and Spieth and Rory the next Tiger.  Comparisons are unfortunate yet inevitable.

However, just as with Michael and Tiger, there will never be another Tom Brady.  Brady is 40 and to the joy of many, he’ll go away soon.  You’re unlikely to see him in constant insurance ads like you do Peyton Manning or magnetic, back healing ads as you do Brett Favre.  He’ll just fade away into obscurity.

He might even have another Super Bowl ring when he does.  I guess, by next Sunday, we’ll see.