Donte DiVincenzo just had the game of his life.  On the biggest stage of them all, the Big East’s Sixth Man of the Year achieved legendary March Madness status.  He scored 31 points off the bench, the most for any non-starter in championship game history.  He was far and away the best player on the floor, or at least the hottest, for the entire forty minutes of hoops.

Accordingly, DiVincenzo won the tournament’s Most Outstanding Player.  This comes two years after his Villanova Wildcats had won a national title, a game in which DiVincenzo was unable to play due to a foot injury.

Monday night, DiVincenzo’s college career came full circle, a beautiful story of redemption.  For a brief moment, he was on top of the world.

Then someone looked at his Twitter account.  I swear it’s only a matter of time before social media leads to the downfall of Western Civilization.  Heck, it might already be too late.

Tuesday morning, half the headlines containing DiVincenzo’s name involved not his riveting performance from the night before but rather what he had posted on Twitter in his past.

The kid is barely old enough to drink.  I’m pretty sure he’s made a mistake or two over the years, we all have, so who better than our beloved media to make sure his moment of glory was as short-lived as possible.

Far more despicable than any offensive Tweets DiVincenzo may have posted over the years (I read them, they weren’t the worst things in the world) is the fact that someone with nothing better to do than scour people’s Twitter accounts for hours on end decided to rain on this kid’s parade hours after the best night of his life. 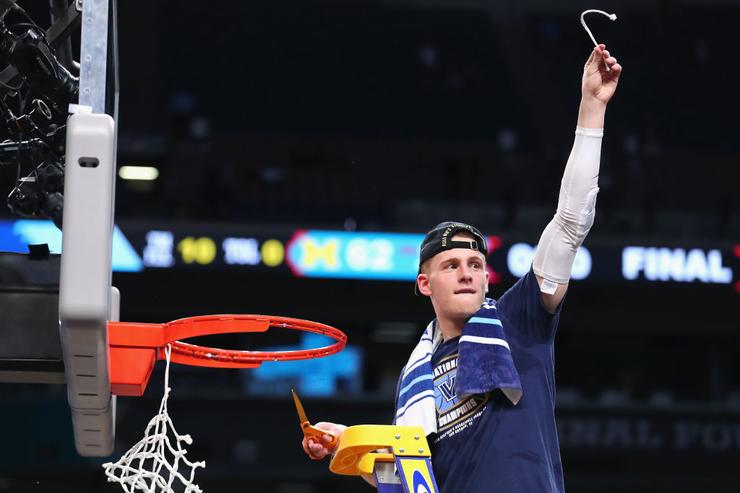 Do media outlets these days employ losers in cubicles to look at Twitter accounts and uncover things people said years ago?  If that’s the case, I’m in trouble ‘cause I’ve thrown some fodder out on social media that make DiVincenzo’s Tweets look like Dr. Seuss.

The only thing worse than someone actually getting paid for this kind of work is someone who does it for free, taking enjoyment in ruining one’s shining moment.

What do you do for a living, sir?  I ruin lives.  I’m also the mouth-breathing scourge that represents everything that’s wrong with this country.

Donte DiVincenzo is not a bad kid for quoting a rap lyric that drops an N-bomb.  I don’t know if you listen to hip hop these days but you’d be hard-pressed to find a song that doesn’t include that word.  Does that mean all current hip hop is shit?  Of course, it doesn’t.  All current hip hop is shit because it’s lost touch with the art of story-telling that made it a true American art form in the first place.

But that’s beside the point.

I’ve said it before and I’ll say it again.  We are a nation of haters.  The fact that journalists are not reporting on DiVincenzo’s record-setting performance but rather what this young man did from his cellphone when he was fifteen years old is beyond outrageous and far more upsetting than the kid quoting Meek Mill on a whim.

Those who make a living doing this sort of thing might want to check their own closets before they go uncovering the skeletons in others.  Or better yet, try learning what real news is.